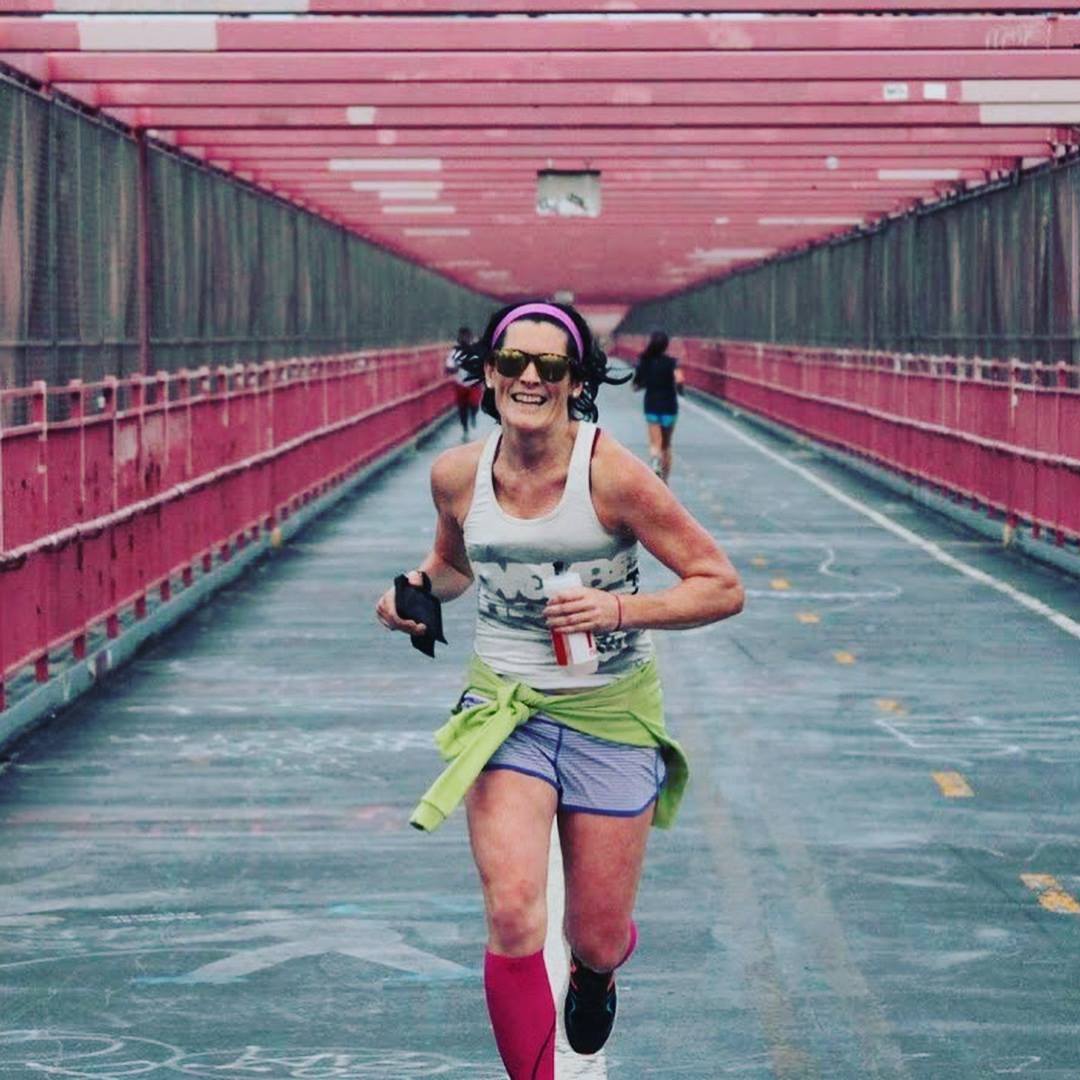 Ahh Jeanie’s retirement post. There’s a lot to be said about someone who leads a November Project tribe, much less two. Four score and twenty sunrises ago, when Jeanie was but a November Project toddler, she already embodied so much of what defines this grassroots movement. She showed up, for herself and others. She shows up so much, that it’s hard to even pinpoint a favorite workout with her. “Anytime Jeanie rolls up next to you with her fanny pack boombox, it’s going to be a great workout.”

[We interrupt this blog post to dedicate an entire blurb to Jeanie’s fanny-pack speakers. They’re pretty much inseparable, soul mates if you will. The peanut butter to the jelly, the fuck to the yeah. Jeanie will rock out while running next to you, like she did with Joe Fox at a Madison Sq Park workout. She will blast Janet Jackson while running bridge repeats, right Joellen? If you find her on the subway heading to a workout, she’s jamming to music ALL.THE.TIME.]

Anddddddd back to our featured program–with her unresolved dedication and infectiously fun nature, it made absolute sense when she was announced as the third co-leader of New York City. She added a new level of spice to the concrete jungle. Fierce and silly could be a thing, and Jeanie brought out the best of that.

The tribe’s vibe was definitely better with Jeanie leading alongside John & Paul. What if we spread this goodness into more of New York though? What if…Brooklyn? And who better to start this up than Jeanie? So off she went to sprinkle the November Project seeds at Brooklyn’s Fort Greene Park. It was winter. It was cold/snowy/slippery/icy/weather-y, but that didn’t matter. Jeanie, and now Sierra, a fellow badass cancer survivor, were determined to just show up. They showed up every damn week to cultivate and give life to the thing that has blossomed to November Project Brooklyn.

Jeanie has this uncanny ability to make YOU as an individual feel comfortable. She knocks down those invisible social walls that make people awkward/scared/self-conscious. She’ll bust out dance moves.  She’ll clown around (did she inherit it from Papa Tinnelly?). She’ll grab an unsuspecting Chinese lady by the hand to join the workout. She’ll notice you, yes you. She’ll call out your name as you race past even if you’ve been to the workout just one time. She’ll ask you about your life outside of November Project. She’ll run next to you, at your pace. In a city as populated as ours, it’s easy to get lost, feel lost. Jeanie will find you, and then instantly make you feel that you belong.

It is hard for us as a tribe to describe what Jeanie embodies in one word. “Fanny-pack speaker” is technically three words, peeps. It don’t count. Here are the words that we do use for our co-leader. Jeanie is brave. She is fierce. Exuberant. She is genuine. And phenomenal, yes. Jeanie is unstoppable. She is a superstar. And supercalifragilisticexpialidocious. She is heart. She is strong, no doubt. Jeanie is 80s. And Beyonce. She is also fandabidoozy (Joon, we don’t speak British English, what in the queen’s name does this mean?).

Jeanie, from you, we have learned to put ourselves out there for the rest of the world to see, to be vulnerable. You’ve taught us that we are never too old, nor too young to try something. You have shown us how impactful it is to support each other. How community pushes us to grasp our goals, to redefine what we are capable of. This community makes it worth taking two trains, waking up before the crack of dawn, and just showing up.

The tribe is grateful.

The tribe is spreading love.

The tribe is likely running stairs next week.