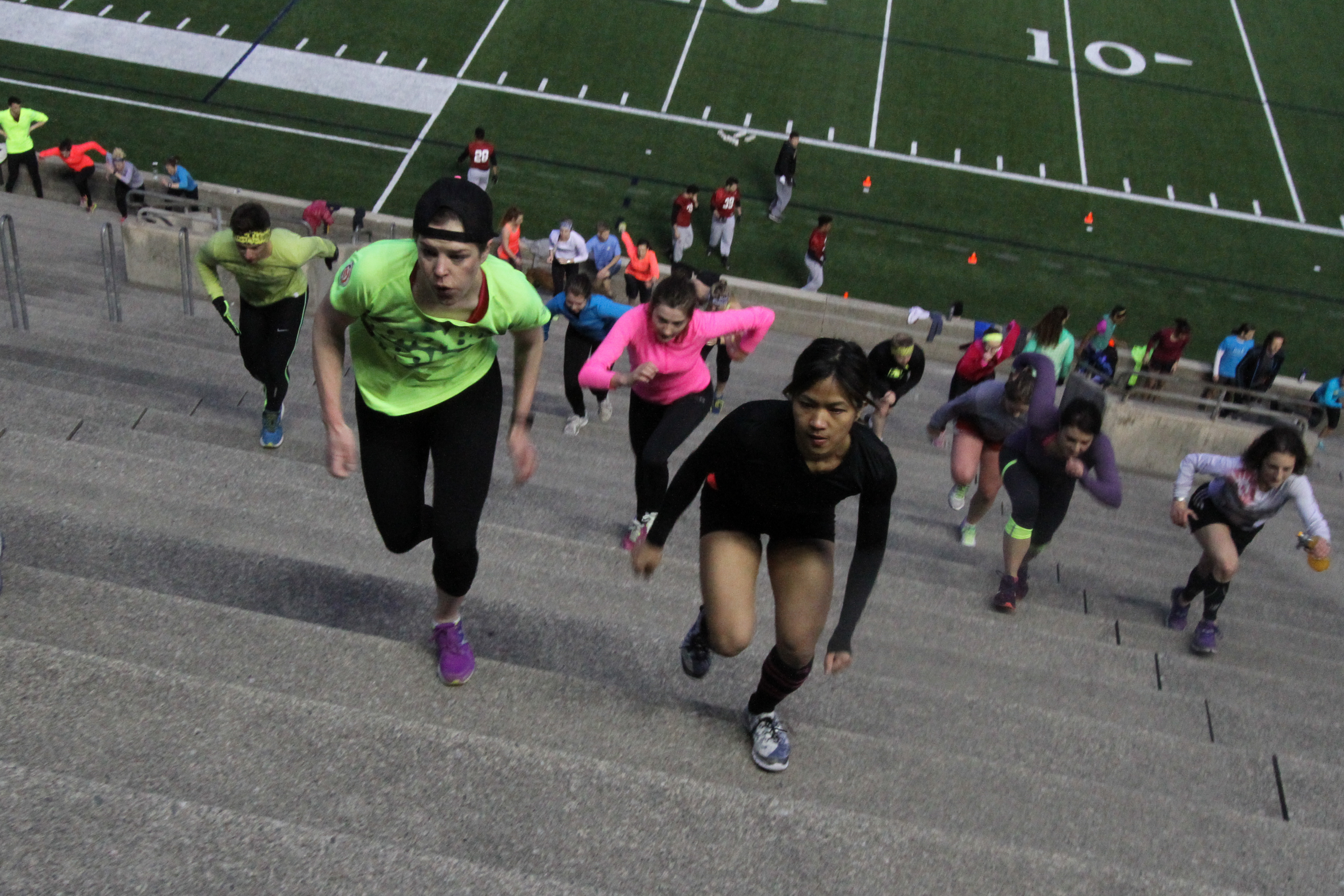 Something pretty powerful happened this morning when the fancy spotlights flickered on during the 5:30 group.  We’ve spent the last few months in dimly lit spaces all over this city, “only able to make out the silhouettes ” of people moving, racing, steaming and hugging.  Today we could finally see the entire stadium and all those mean mugs once again.

We knew there would be a lot of buzz and a shit ton of energy with the bubble down so we had to do a workout that could keep up – Raceman. Em Sauce encouraged people to at least try today’s workout even if it was just for a few minutes.  I’d absolutely butcher what she said so I’ll leave you with this similar line from Friday Night Lights instead:  “I said you need to strive to be better than everyone else. I didn’t say you needed to be better than everyone else. But you gotta try. That’s what character is: It’s in the try.”

Well this was undeniably one of the biggest Raceman turnouts ever.  Whether you went for 1 minute or completed the entire thing, at least you tried it out.  What I was blown away by was the fierceness that everyone of you dropped no matter what workout you decided on – you all did more than #justshowup.  Seriously, 300 hot red Ferrari’s drove up, revving to go and not a single person in any of the passenger seat.  Everyone took the driver’s seat, buckled up and straight fucking gassed it.  Maybe a little too much since I got this directly after the workout:

(This is most definitely a record.  We as a tribe definitely just set the puke record for the most people puking after a single workout – throw it on the Record Page.  Is that a good thing?  We’ll let you decide or we’ll wait for corporate to come after us…)

Anyways, lots of people fear this workout.  They may even hate it and that’s completely alright.  It’s not everyone’s cup of tea and that’s why we offer an alternative. But before you write it off, you should definitely try it out, even if it’s only for one race.  A lot of people found new limits today.  They pushed themselves harder than they thought possible and tried something that probably scared them since the first day that Raceman was introduced.  The magic of this workout is in those split second decisions – when someone points to you at the bottom of section 28 and you decide to race all out again and again and again.

So when the lights flashed on this morning – what did I see?  I saw a few hundred peeps toeing the line. I saw pure exhaustion. I saw people giving it their absolute best.  I saw fierce, determined racing faces. Game on, don’t fuck with me faces. But the second Em Sauce called time, those faces broke out into smiles. That kind of smile that says, “Holy crap. We just did that. We just did way more than we thought we could.” You know the one.

Y’all should be proud.  Y’all are ready for the next PR day (which so happens to be next Wednesday, bay-buh-baby) . Until then, see you on Friday.  Don’t prolong it, just verbal now.