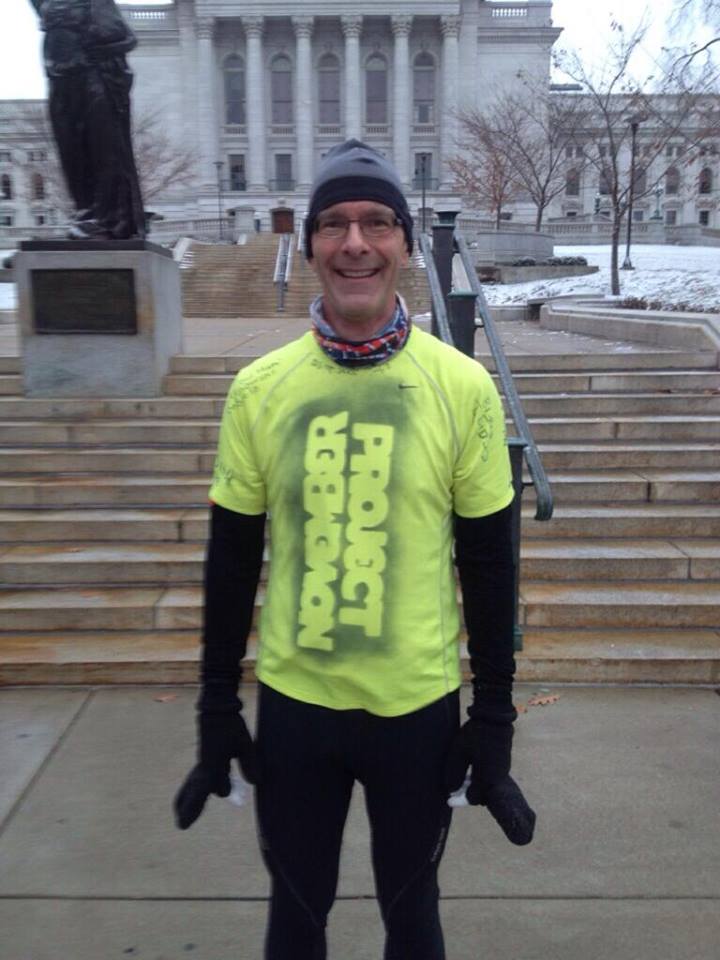 In some circles, he goes by Dave “Make Love Not” Wargowski, but we call him “Dr. Dave” since he’s a doctor and we love alliteration. More technically, he’s a “medical geneticist”… I don’t know what that means or if it’s even a real thing, but I’d trust him with anything from brain surgery to delivering my child. In any case, I was thrilled to receive the following unprompted blog submission from the good doctor himself. He’s the paternal figure of NP-MSN (due to his wisdom, not age), and he epitomizes the spirit of our huggy and awesome community. Enjoy! – Teddy G

It hit me on Black Friday, lying on my back with a dozen other laughing people in the middle of MLK Boulevard, watching a razor sharp vapor trail take the color of the rising sun. The cold pavement feels good. Steam is rising off my head and chest. My feet are off the ground, if only briefly, and fluttering. We jump up and scramble to make way for a car bearing a hard-working capitol employee, or maybe the Governor, as our partners tag and take our places in its wake. We sprint toward, then up the stairs, and touch the carved wooden door. It’s 6:45am and we are the tribe – the November Project – and for the first time in my life it occurred to me that I might be able to start calling myself a runner.

It’s a diverse group. Some are accomplished athletes, others are heading that way. I am no athlete. Never have been, never will be. My crowning athletic achievement? Exactly 16 seconds of High School football. We were up 54-0, the clock winding down, coach yells down the sideline, “HAS ANYBODY NOT BEEN IN THE GAME?”. I was the 6th offensive tackle; so far down the roster I had a duplicate number, same as the starting guy – the announcer called his name as I ran on the field. We were all so confused, it was 4th down, we delayed the game and were suddenly on defense. The ball went up, they pulled the guard on my side, I ran to nothing, watching the quarterback run away from me at ridiculous speed. That’s it. And it was 38 years ago.

Too soon after that came the freshman 15, and years of way too much time sitting at desks and on couches. When our daughters were old enough my more athletic wife Lori and I started cycling and have done a fair amount of that. But running? Nope. And what the hell is a burpee, anyway? I’m still not sure. Point is, NP doesn’t have to be open to people like me. It doesn’t have to be a workout where people walk if that’s what makes them stronger. But it is that place, and it is tremendous fun, of course because the people who are November Project make it so.

Things can feel pretty settled at my stage of life. But some change is good. This change is good. Running and planking with a bunch of people half my age makes me feel old, and young. I’m going through this winter at the lowest weight I’ve had since my football day (singular) and less in hibernation mode than any year in recent memory. Each week I feel just a little faster, a little stronger, and have a little less pain (yes there is pain). More than anything I feel like I have a new start, a healthy new start that won’t hurt anyone I love (unless I bowl them over running backwards, which could definitely happen), a start I really could have used a year or two before I signed up to play football.

Earlier in November Lori and I did a 4 mile run, in the rain, by ourselves. Later we ran 5 K’s three weekends in a row, each a minute or so faster than my one attempt the year before. I’m not fast, but Lori is patient; I did it, and it felt fantastic to sit on the floor and stretch afterward. So thanks NP MSN for those moments – I never could have done them without you.

And if you’re wondering about this NP thing and maybe thinking you’re too old, or your 60 hour/week job is in the way, you’ll have to come up with a better excuse. Good luck. There is no excuse. Best of all, once you start you won’t want an excuse. We all start from different places, but we move forward together.