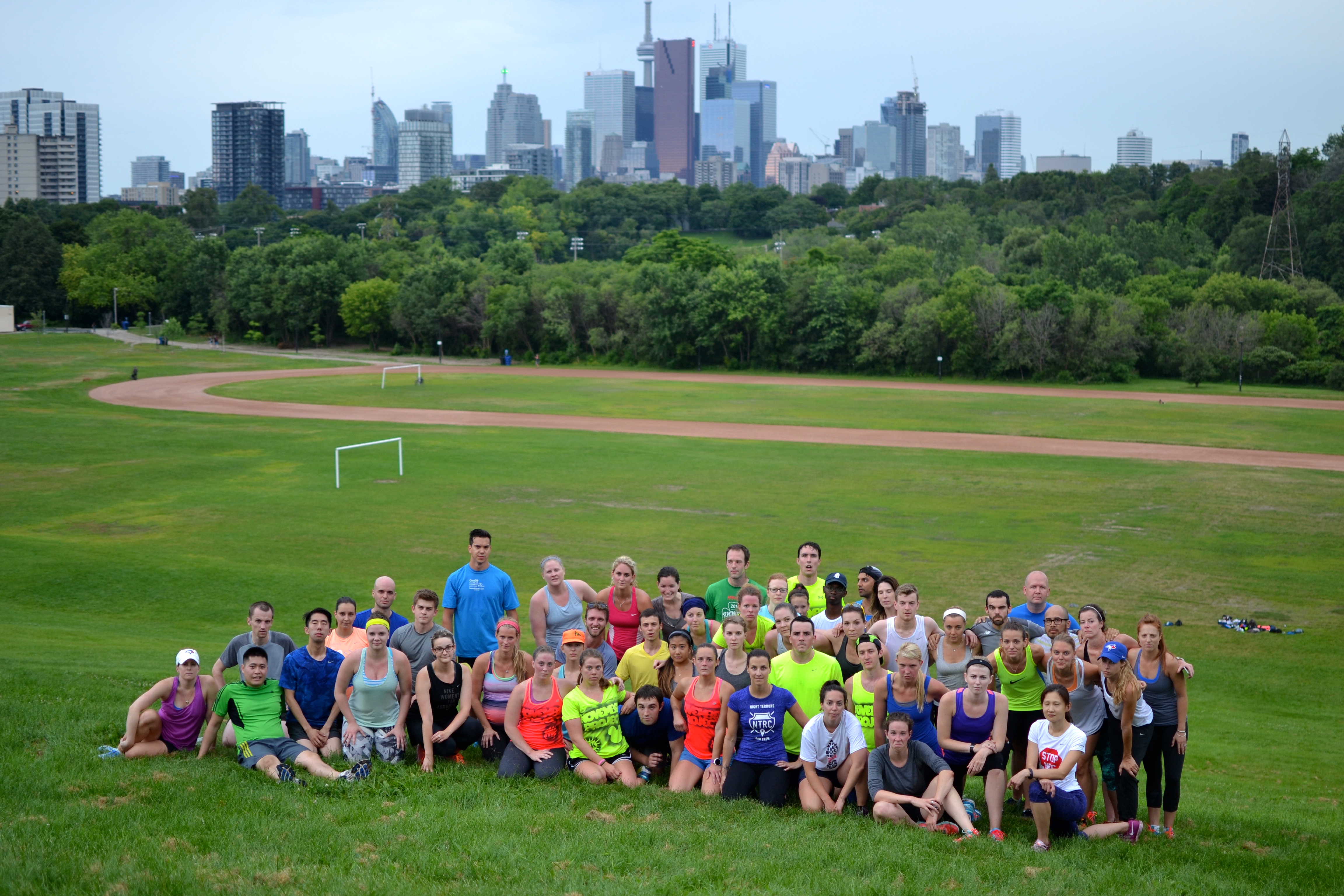 Editors Note: This post was crafted this weekend at YTZ airport.

As I’m sitting here at Billy Bishop airport rolling my hamstrings on a metal water bottle I can’t help but to reminisce about the last few days in Ontario. “How is it possible that Claire and I have so many people in common!?” A slow moving cart of elderly folks passes by at walking pace. “I’m still not sure about that guy Sam!” “Man, that race was hard!” are just few thoughts running through my head as the voice over the loud speaker is announcing that the flight from Toronto to Boston will be leaving through the gate 9. But let’s back up a little…

Toronto as a potential November Project city has been in our crosshairs for a loooong time. The city is a very active population that doesn’t look at weather forecast for excuses and has been sending emails to us since the early 2013 asking when we’re are bringing NP to YTZ? But we didn’t want to rush. We wanted to make sure that whoever starts NP will not be doing a “B”, “B+”, or even A quality work. We wanted to see someone, a clear leader, that would be lining up A+, after A+, rain or shine, until the end of time. Then BG told me: “There is this badass rower girl name Claire, who wants to start pledging in Toronto with an English fellow named Sam as her co-leader. What do you think?” So far my experiences with badass rower girls have been nothing but positive and few English dudes that I know are pretty solid, so it seemed like from the character perspective we’re off with a good start.

But I had to see it myself and the opportunity couldn’t have been better. The North Face Endurance Challenge in Blue Mountain, Ontario (ECSON) is a race that I’m pretty found off. Last year was the first time that the Endurance Challenge series put together a race in Ontario and I was lucky enough to win the Marathon Relay race with a partner that jumped in instead of injured BG and help me take home the gold belt buckle. This year, my boy Harry Mattison decided that Marathon Relay wasn’t his cup of tea so he signed up for a 50km (k is not a measure of distance) race in Iceland. ECSON is just two hours North from Toronto, so I figured if I’ll be running trails in the neighborhood I might as well do a pop-up workout to get a little NP buzz going and meet up with Claire and Sam to talk about the World Takeover. Left without a partner I asked Sam to join my team and evenly split four legs of a marathon relay between the two of us. He said yes, while Claire was wiping tears of FIMO after committing to a wedding that weekend and couldn’t make it to the race. At least now I know how committed she is to this whole free fitness movement.

The pop-up workout was at Riverdale Park East, a massive space with a dirt track, two soccer fields, and a very nice steep hill that overlooks amazing Toronto skyline. Joint recruiting efforts yielded over 50 amazing human beings (some of them driving 10 hours all the way from Boston) that enjoyed sprints, situps, and everyone’s favorite, burpees. To cap off the workout, we banged out a five minute burnout that got the blood pumping and quads burning.

After the workout we headed North. The rain that followed us from Toronto to Blue Mountain did the exact opposite from the cooling effect we were hoping for. Saturday morning was hot and humid. Really hot and humid! Oh, and it was humid… and hot. Along with the hot & humid heat and humidity, we had to race up some gnarly ski slopes that seemed to have no end. The Marathon Relay event went off at 10AM and around 4PM there were still some teams out there trying to finish the race… in the heat 4 person team from Boston “Sky’s Out, Thighs Out” took home gold, while Sam and I came second. The rest of our NP teams that traveled to the event had fun, but we all developed a whole new respect for the runners that competed in a longer distance events while battling 90+ degree temperatures and 85% humidity. I guess that’s why they call it THE Endurance Challenge.

So as I’m gathering my thoughts while breaking up some built up lactic acid and waiting for my flight to take off I know two things:

1. Claire and Sam are the right people to grow their #NP_Pledge group into an NP tribe. Please join their pledge group every Wednesday at 6:15AM at Casa Loma Stairs or not, they’ll be awesome with whoever shows up.
2. November Project people are amazing humans, willing to travel to the end of the world as long as there is a race and some beers/good times there.