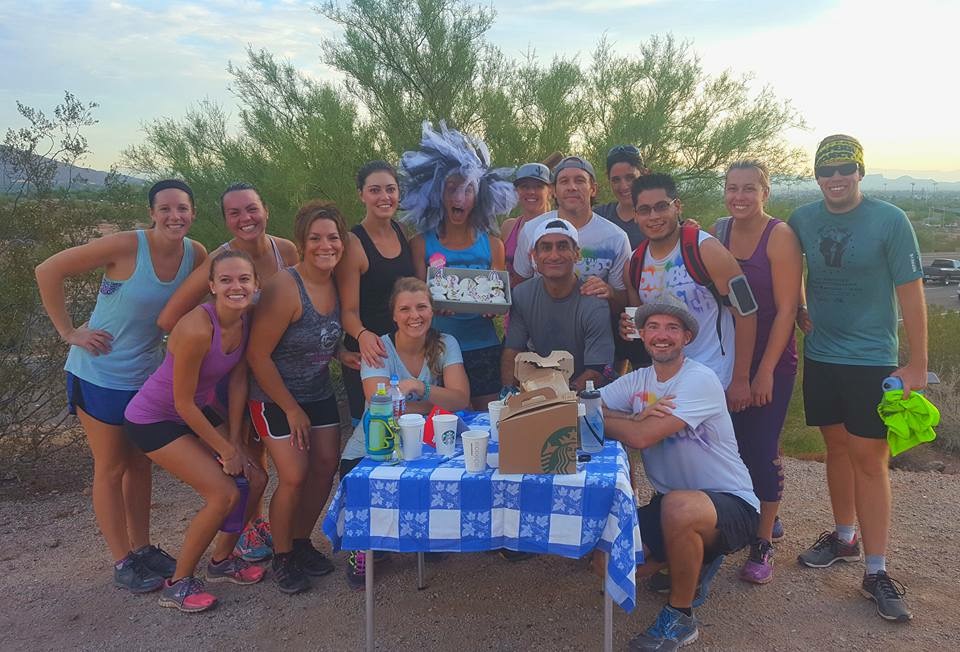 If you weren’t there, you should’ve been. Here is what you missed:

The sunrise was incredible.

Liesl, Michelle, and Amanda celebrated their birthdays. They danced. Wayne made miniature cakes. They wore tutus on their heads.

We haven’t given out the positive award in a really really long time. Then OUT OF NOWHERE we gave it out two weeks in a row. Trevor and I are pretty picky about who we give the positive award to because we want to respect the honor of the award. It just so happened that we had two people totally deserving of the positive award in back to back weeks. Both Scott and Katie have demonstrated what it means to be part of a tribe and have shown us what resilience looks like in the face of hardships.

Today our girl Katie took home the positive award. Katie is one of the most accomplished athletes in our tribe, but after being sidelines with an injury followed up by a MAJOR freaking surgery she has been forced to ride the bench. And I mean FORCED. The second that she was given the go ahead following surgery to what I can only imaging was a “light jog on flat ground” from her physical therapist she straight up demolished everyone at the Monday hill workout. Like every good athlete she went 100% back into instead of easing back into it and subsequently got slapped on the wrist by her doctors and physical therapists and is back on the bench.

But you know what? She keeps coming. Each week. She’s one of the slowest walkers I’ve ever seen and her form is complete shit (kidding only), but she is out there nonetheless walking every Monday and Wednesday. This might not seem like anything crazy to you, but to someone who is as serious an athlete as Katie, I can only imagine how frustrating it is to not only not be able to run but to also watch and support everyone else as they run. She could haven’t chosen to stay at home, but instead she is there to cheer on all of you and help Trevor and I do whatever it is that we need. And we love her for that.

I had my lululemon ambassador photo shoot during the workout.

I’ve never really loved being in front of the camera. In fact, I disliked it so much I became the Cheif Yearbook Photo Editor of my high school to ensure that I would be behind the camera and not in front of it. So today was a bit awkward for me and I would be lying if I didn’t tell you that I was nervous to have the shoot in front of all of you all. I am so thankful for all of your beautiful smiling faces and fantastic energy because I was immediately at ease. So thank so very much for the support.

NEXT WEEK: For those of you who have been living in a cave and do not know, I absolutely adored Rose Mofford. Easily one of the greatest Arizonans of all time. Rose passed away last week and we want to pay our respects. So look for information on our Rose Workout for next Wednesday. Do know who Rose is? Find out.

THE NORTH FACE ENDURANCE CHALLENGE – SAN FRANCISCO: Everyone who is anyone is going. First weekend in December. Get your tickets now.

RACE SEASON – Finally our fall race season is upon us. Please let us know what races you all are doing by posting in the cactus lounge or letting Trevor and I know so that we can support you. We are looking for volunteers for aid stations for Craft Classic and Javelina Jundred.

BILL AND JESS’ EXCELLENT ADVENTURE – Niether Bill nor Jess was there today, but had they been there we would have congratulated them on their finishes at the Mogollon Monster 100 Miler this past weekend. Bill Dittman (if you wanted to congratulate him) came in 2nd place in what I believe was his first 100 Miler. I’m pretty confident it was his last PR day win that took his training to the next level.

One Reply to “Today was Great.”