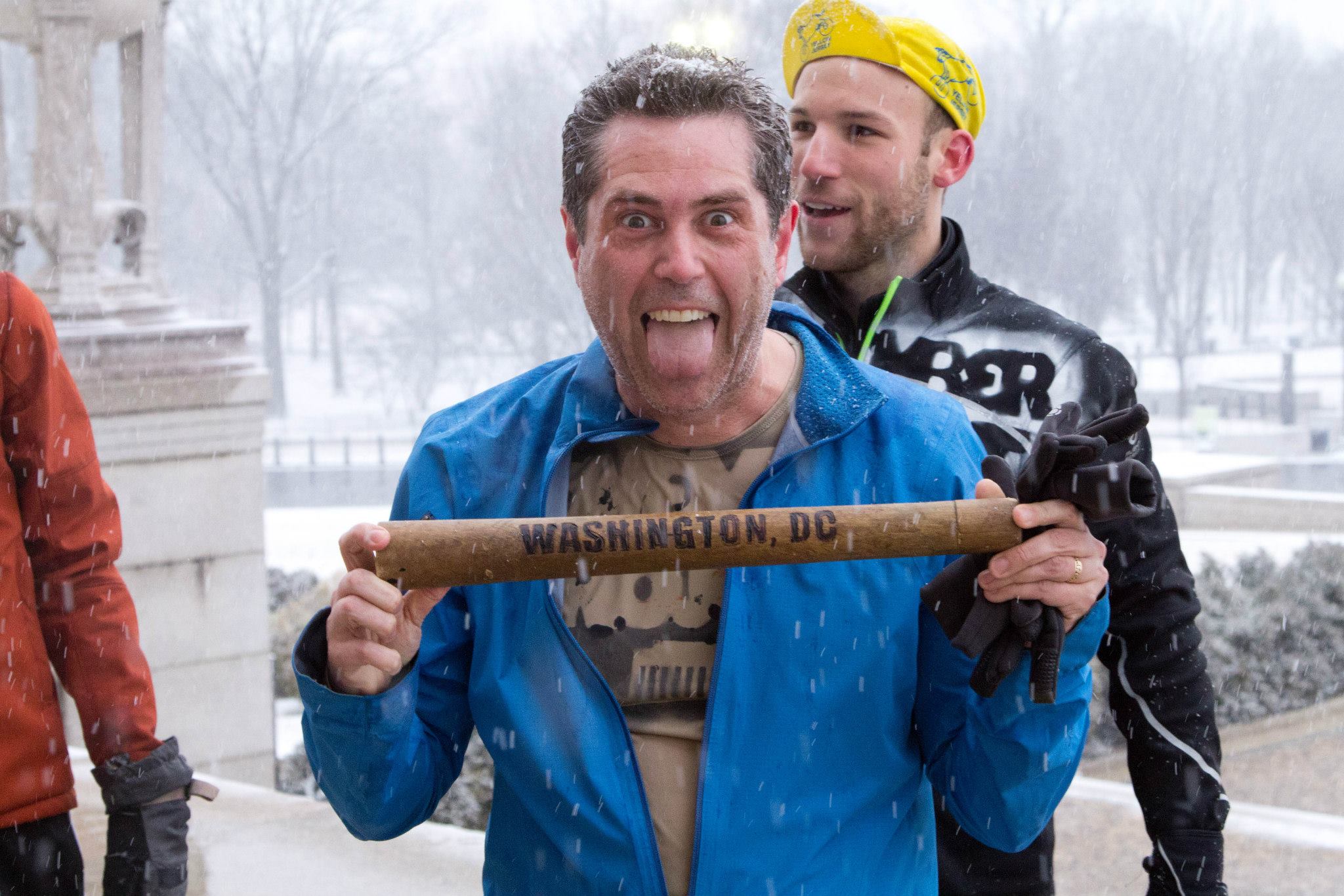 The continuation of our Sunday Series would not be complete without sharing the story of our next guest blogger. There isn’t much to say about him besides the fact that it’s not possible to go to a workout, social hour, or see him on the street without getting the biggest, most friendly, hello-and-great-to-see-you hug. We hope you like Italian food because this is Can of Spaghetti (Chris Cantergiani):
I’m a hugger.
A Hips-in, arms-wrapped-around, smiley-faced, mother-hugger.
I’ve been that way my whole life, and folks I love know that my arms ache if I haven’t hugged them in a while.  I’m also a runner, and I will talk to anyone within earshot about running with the zeal of the newly converted.
So when Matt Anzur told me last November that he heard there was this free fitness group that runs the Lincoln Stairs repeatedly every Wednesday at dawn and that they “hug and smile and shit like that” I immediately thought these sound like my kind of people.
I had NO idea what I was in for.
We showed up that morning, and a bell went off in my head.
A bell that meant…. RECESS!
It was like I walked onto the biggest, most glorious, badest-assed playground imaginable; and all my buddies were there.  These people I’d never seen before weren’t strangers.  They were friends I just hadn’t met yet!  They hugged, they smiled, they laughed and they ran.  They ran up and down the stairs with abandon, and then they played games!  Like “Here’s a tennis ball with instructions, come do 10 burpees with me!” and “How about I do a plank, and then you do a plank on top of me?!”
These were people who were breathless, sweaty and grinning ear-to-ear while basking in the dawn’s early light.
Every person I met that first day (and all the people I continue to meet every time we get together) shared the same spark:
This is fun.
This is a thing.
This is a priority.
I had just finished running the Marine Corps Marathon about 2 weeks before attending my first November ProjectWednesday, and was starting to get serious about training for my first 50K race in the spring.
“Oh, yeah.. you show up every Wednesday here and run these stairs,” Steve Christensen told me that first morning, “and you’ll really feel a difference next race you run.”
That sounded logical to me, and I figured I’d incorporate that into my training program.
Around that same time I had decided that I really wanted to work on becoming a better iPhone photographer and Instagram user.  (A journalist by trade, I think think this internet thing is going to catch on.  Raising one’s profile on the interwebs is considered good business.) I took 6 or 7 pictures that first morning and put them on Facebook.
I had recently seen a friend’s posting online that stuck with me:
Set a goal. Make a plan. Get to work. Stick with it. You will reach that goal.
So right then and there – that first morning – I set 2 goals:
1) Take advantage of the scenery, sunrises and subjects in front of me to improve my photography.  I thought it might be fun to see if I could eventually get a “photo-of-the-day” from some running site.
2) Run that March 50K in style using November Project workouts as my ‘secret sauce’.
Flash forward 16 weeks.
Toss in something called an “Arctic Vortex” with record low temperatures and government-crippling snowstorms. The Tribe here in DC not only kept showing up, we kept getting larger.
In January our recess evolved and we expanded our playground to different parts of the District for Friday sessions.
I kept taking more pictures, experimenting with different apps and angles. Eventually I started including #instarunners (37,000 Followers) as a hashtag on some photos, hoping I might catch their attention.
Last Thursday morning, I woke up to the sound of my iPhone blowing up.

A photo I’d snapped of our own Emma Nelson during a lap through the WWII Memorial had been tweeted out as #instarunner’s photo-of-the-day.  Nearly 1500 people “liked” it within 24 hours.  My own account gained several dozen followers and I began connecting with runners and iPhonographers around the planet.  Goal #1 achieved.
2 days later – Saturday morning – was the Seneca Creek Greenway 50K Ultramarathon. The weather was perfect, but the conditions were sloppy-beyond-comprehension. Just unreal. Imagine if the planets Hoth & Degobah had an ice-swamp planet baby and you had to run through it for 8 hours like it was your job.  OMG.
But it was so. much. fun!  I felt strong.  I had learned I was #weatherproof and I was happy.
I gotta tell you… Steve was not wrong.  My legs made me proud that day.
Before the race started, I ran into another NP_DC member at the start line!  Then during the race itself, Sara Davidson caught up and ran with me for a bit.  We chatted as we zoomed around the lake and took a photo.  It was comforting to have my recess friends along on this race, and it occurred to me that members of this community are everywhere!

So now, I’m setting a few more goals.  I’m ready to tackle them.  I’m looking forward to running through the cherry blossoms with the Tribe, and the warm mornings on the horizon.  Find me on the Lincoln stairs on an Wednesday morning and I’ll tell you a few more.  And I’ll keep taking photos and posting them.
When my friends who aren’t runners ask me (as they always do) what is going on, I’ll have the right answer…

“Why are you doing this? What are you training for?”