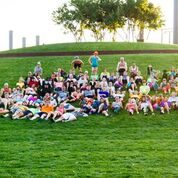 We are not the west coast where nature just multiplies our three best months by four before calling it a full year. Minneapolis gets down on all four seasons: fall, spring, winter, summer – to the extremes. So as we move forward out of the sweaty, muggy dog days, start thinking about that extra layer of skin you’ll have to pull out from under your bed. School is in session y’all, and summer will roll around in another nine months, but November Project Minneapolis rolls on until then.

There are some things that you will be able to count on through the next year, even while we set lofty goals to become better people. For instance the first ten minutes of Wednesdays at November Project MSP for example…

Members will shuffle in, leaving little time to spare between falling into their first hug of the morning and being forced to bounce. And no matter who you are: tribesmen, tribe-leader, or cheerleader, there is that piece of you that would like the 6:37am explanation of the morning’s workout to bring you a sense of relief. Like… “Oh, this won’t be that bad”.

But at least one workout will continue to yield the opposite response. Even though it is the favorite of some, its mention will continue to render a handful of under-the-breath “F#cks” this school year.

That workout is The Messenger. Conceived in the early winter months of 2015, the Messenger is hard no matter what.

Based in Gold Medal Park beside the Guthrie Theatre, The Messenger is a series of 30 sprints in 30 minutes over an arching hill. The tribe begins each sprint together at the top of each minute. Whatever time you have leftover on the other side is yours to distribute high-fives, hugs, or to catch your breath. But if you are not feeling it by number four or five, you are not racing hard enough.

To complete all 30 is an accomplishment. To race all 30, whether its against yourself or the butt next to you, is the point.

We will do the messenger throughout the next school year, in the snow and in the sun. Show up and race it with us.