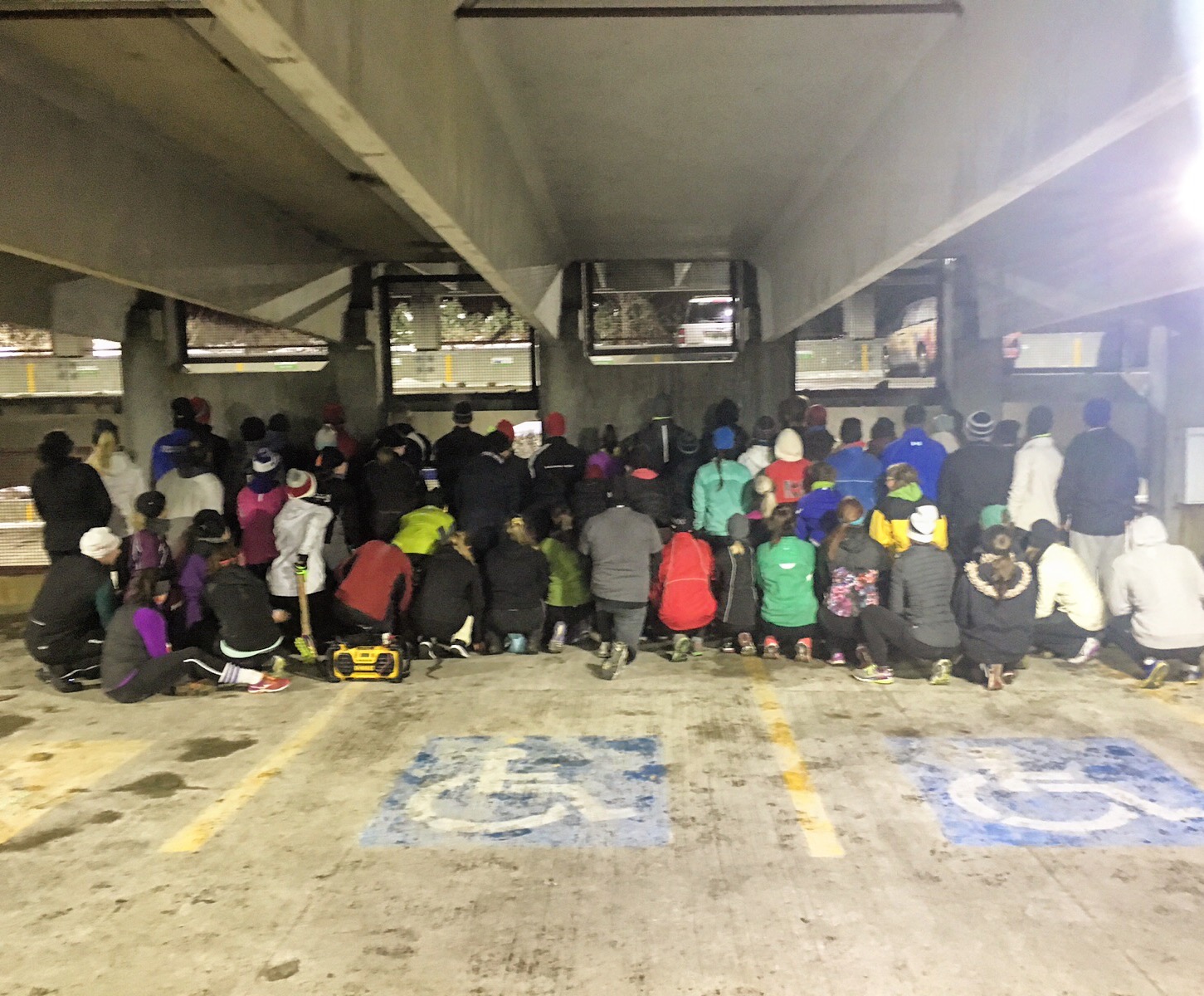 Wisconsin Notes:  This morning was hard. Renee is a bad-ass.  Rick is feeling feelings and really wanted to tell you about them in an absurdly long blog post.

After this, the first Wednesday of 2016, it seems only natural to reflect back – pontificate, if you will – on the year that was 2015. This time last year we were a young, upstart, pledgling tribe – having duked it out through the “dark ages” that was #NP17 with #nonewtribes, we were finally given our one shot – our one opportunity – to become a November Project Tribe.  Would we capture it, or just let it slip?  (Sorry, I blacked out there – what happened?). After hitting a surprising 60 people (it seemed so big at the time…) at Winnipeg Gone Rogue in the fall of 2014, we had absolutely no idea what to expect through our first winter of workouts. January was relatively nice to us with reasonable not-minus-30 temps, and then February came around with a punch right in the gonads and decided we needed the coldest month on record to really prove that we had what it takes.  By the time Bojan the Barbaric showed up with his tribe of greasy Oilers in the first week of March, we were a hardened, feisty group of 25ish regular tribe members that had a lofty goal – 100 at a workout by June 3, 2015.

100 was a big number. A BHAG if you will – almost unreachable but perhaps maybe possible.  In the month leading up to June 3 we slowly started to creep up and our numbers were increasing every week – we broke our previous record of 60, grew to 70, and plateaued around 80 tribe members at a single workout by the end of May (back then it was actually easy to count how many of you showed up). Come June 2 we had absolutely no idea what the next day would bring… But I was optimistic, so I bought 112 birthday hats thinking we would beat our goals and then some.  Well – as the 30+ of you who DIDN’T get a birthday hat can attest, we crushed it.  Blew it out of the water.  After that day, 100 seemed small – all summer long and well in to the fall we were over 100 people every single week.  Incredible.  You are all incredible.

What, a random passer-by that I just made up asked one time, makes people #justshowup every week? Is it the free cinnamon buns that we got that one time?  Is it the bootylicious asses you saw and everyone in today’s group picture? Is it Derek’s smile? Is it the fact that most weeks we have trouble walking on Thursday and Friday from the ass kicking delivered on Wednesday morning? No.  Well, maybe partially those things (the metaphorical passer-by was really keen about Derek  – weird…) but my answer to the made-up passer-by who displayed such genuine curiosity at our get-asses-out-of-bed-ness is quite simple: the people. The infectious community that guarantees you’ll step outside of your car and instantly be greeted with a warm hug, you’ll bust out 14 more scissor squats than you’d ever get at the gym simply because of the answer to “are you all good?”, you’ll crush a P.R. while laughing and giggling and high fiving and having the time of your life while you forget that, hey – you actually hate running. The community that has sprung to life from this tribe is a testament to Winnipeg and to everyone who has come just once or made it to all 52 weeks of 2015 – thank you, and keep fucking pushing it.

My blog post wouldn’t be complete without a shout-out to our positivity award winner – and what a winner today.  Renee showed up for the first time around October-ish as a relatively new Winnipegger and to be honest we’ve been ready to give her the positivity award since day one.  Despite not having a clue what November Project was about when she first showed up, she represented our core values immediately from day one – showing up in just her second week (which happened to be Lumberjack Games) in an outrageously good Lumberjack outfit and chain saw. She has been cruising ever since.  Always the first to comment and share and spread the love on social (what do you even do during the day??) she represents everything that we are all about, and we are so happy to have her every week.  All of this would have been more than enough to deserve the positivity award, but add on to it that she has been showing up the last few weeks with a serious foot injury – and crushing workouts all the same.  Great to have you Renee – keep that smile bright and the energy rolling in to 2016!

*Drops the mic and walks out*