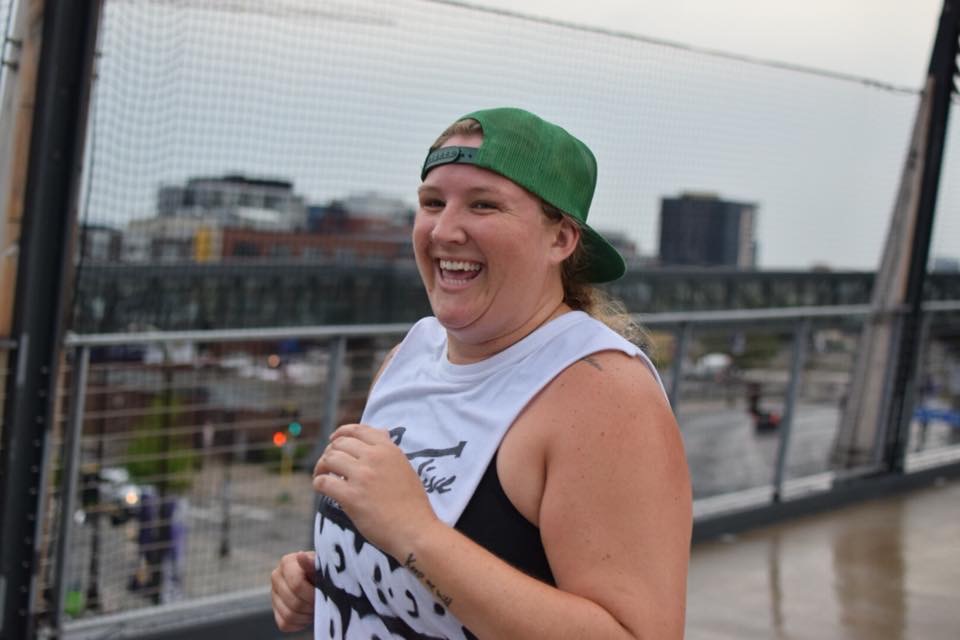 November Project: The Workout is the Gateway

Here, meet NP MSP’s resident pro footballer, Sarah Stuhr (they/them/theirs), and learn what got them to their first workout (spoiler alert: it involves tags) and why they just keep comin’ back.

As I come up on my one-year anniversary of just showing up to November Project/Minneapolis, I’ve been reflecting on my time with the group and a time in my life when I wouldn’t have been…couldn’t have been…anywhere at 6:27a.m..

In the fall of 2016 I found myself a little lost, surrounded by friends but feeling totally alone as I began a painful break-up from a five-year relationship. Desperate for community, I tried out for the Minnesota Vixen. What I thought was a beer league level team turned out to be Minnesota’s professional women’s football team, and two months after tryouts my story had unfolded thusly: drafted to the team and single as a pringle. Traditionally a relationship human, I found myself trying to navigate being single for the first time since my early 20s, not an easy task now that I had recently turned 30. Naturally, I turned to this new app that the young millennials in my life used: Tinder. As I filled out the set up questions, I found myself checking a new box for the first time: Interested in Women. I came out to a few close friends and found my seasoned gay friend to help me into this next phase of my journey.

The app was too overwhelming and deleted within a few days, but a new aid showed up to take its place: alcohol. I was used to binge drinking to blackout once or twice a week (which I thought was completely normal behavior) when I joined friends for happy hour but now I needed this social lubricant to take the edge off: of talking to new people, of looking at new people, and of looking at myself differently. I soon began planning when I wanted to drink around my football schedule. Finding others to join was easy – I had just added 60 new friends to my contacts, many of who were more than happy to party after games and brunch it off the next morning. I quickly self-selected myself to be the life of the party and thought I had made it. Once the season was over, my drinking restrictions lifted and I found myself making plans nearly every night of the week with different groups of people for happy hours. And when that wasn’t enough to take the edge off my day, I pre-gamed over lunch at the bar just down from my office. I was the Minnesotan version of Carrie from Sex & the City: My life was a comedy of errors and I was here for it, I had arrived.

It wasn’t until I went to run my first race post season that I thought my drinking might be out of control. Sure, I had a friend and teammate who was sober who occasionally told me, and I quote, “You’re a fucking alcoholic.” But I was sure they were just joking around, and they barely knew me so what did they know? Apparently something I didn’t. Because while I used to be able to control my drinking before events like football games or distance runs, I found myself ordering a beer when I wanted to say water the Monday before a half marathon…and then Tuesday…and then Wednesday. And since the buzz from a few beers at dinner wasn’t enough, I took shots when I got home with my roommate. She was ready to give up when we realized we hadn’t unpacked the shot glasses yet but I was desperate and found an alternative: Salad dressing Tupperware containers. “Why are we taking shots?” she asked. “Why not?” was my response and that was all it took for her to shrug it off and oblige.

It was another month before my last bender and on October 20, 2017, I messaged my sober friend – I needed help and I didn’t know where to go and could they help? They welcomed me with open arms and introduced me to another community of people who had found a program to help them with their perspectives on life without the need to drink.

Sevenish months later, I was surprised at two things: how many feelings I had and how easily I could wake up in the morning. I had been following November Project on all the social media platforms for a few months and when I saw a post about a “Week of Wonder” where I could get not one but FIVE shirt tags for showing up all week, I knew this was the time for me to #justshowup. I brought a few friends with me throughout that week who declined my future invites to join these “crazy people who are too happy too early in the morning and like running too much” but I was hooked. I had found another community to which I could belong, filled with humans who dreamed bigger than I thought was possible, and worked harder than I knew you could to get there.

And knowing it or not, since showing up, this #freefitness community has helped me navigate a lot of life during this last year. Being fired and being hired. New relationships and subsequent breakups. Preparing for a national championship and coming home in second place. More feelings and weddings than I can count. And how? How can a workout group accomplish this feat?

Here’s where I blow the whistle on this whole scene. You should probably sit down.

November Project is not a workout group. The workout is just a gateway. It’s the shine and the flash and the spectacle to get you here. And once you’re here, you’ll find so much more than a group of people, meeting at a specific time and a specific place with a specific goal. You’ll find dozens of humans who have at least, and sometimes only, two things in common: the desire to workout and the suffering of the human condition. And after a quick bounce and a fuck yeah, you’ll find a partner to chat about things with – like your favorite Cheerios flavor, what animal you’d be, or if you were going to competitively eat a food, which food it would be and why. And I have yet to find a single person with the same answer as me to any of those questions. But within this community I have found my people. People who come out and watch my football games. People who noticed I was sober and started making plans at places that are spaces that I can feel comfortable in. People who sent me messages of love and embraced me when I re-introduced myself to the world with the pronouns I feel empowered by. November Project is a community where I showed up and was welcomed. November Project is a community where I am myself and am celebrated.

I am a human who loves as a default, celebrates as a baseline, and cares without measure or reason. And November Project is community that gives all of that, and so much more, back to me.