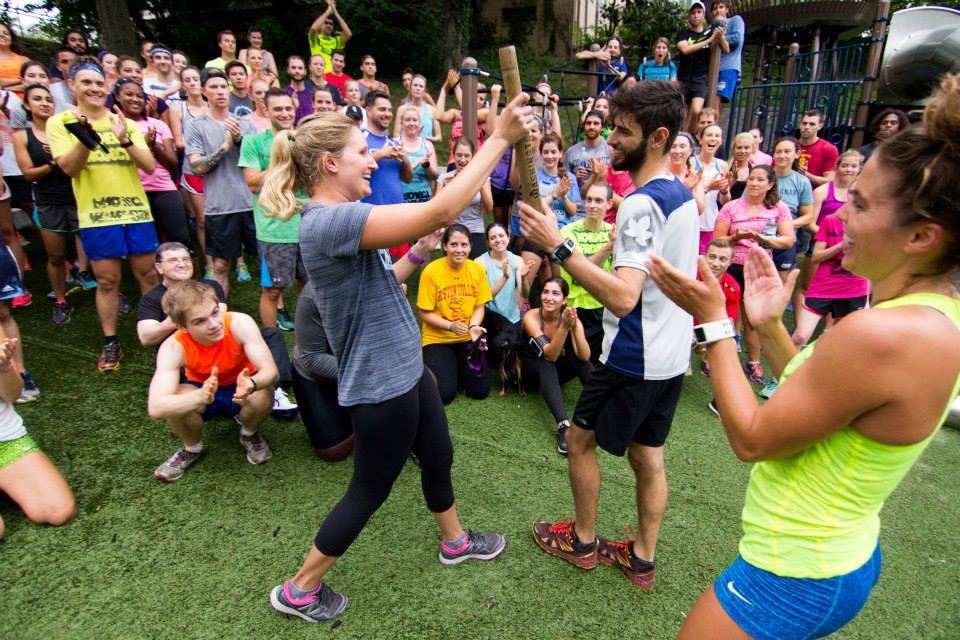 DC, this post is a day late, but zero dollars short. Please enjoy the beautiful words from one of our own today. NYC, know that you have an absolute gift coming your way. And if you’ve never been to an NP (FLOTUS, ahem) and just stumbled on this randomly, finish reading, and join us tomorrow.

I bumped into Danny Metcalf in September 2013, in the lobby of my apartment building in Arlington, Virginia. We had been college buddies, and he had recently moved to the city, but we hadn’t found a chance to connect yet- “Oh yeah, let’s totally grab a drink soon!!”- Totally!”…you know how it goes. Luckily, fate had our backs, and brought him directly to my doorstep. Danny told me about this new running/fitness group, at that time called Early Morning Abe (since we were still an NP Pledge group), that he was starting, and told me that I should come check it out. So I did.

Getting to your first November Project workout is, perhaps, the hardest part. At least it was for me. After a failed attempt at driving to a workout, I decided to take the metro the next week. I ran the longer-than-expected mile from the Smithsonian metro down to Lincoln. It was early, it was dark, and I was late, not to mention incredibly nervous. I jogged up to the stairs and found Steve, who was extremely welcoming, and told me to join the rest of the group that was running along the Reflecting Pool. Following this intro, we headed over to the Memorial Bridge to run stairs and do some pushups at the top. I will never forget the moment at the top of the stairs when I looked around at the other women present to confirm that we were going to band together and do modified pushups, as I’d grown accustomed to in recent years. I did not receive that confirmation. These women were badass, this group was badass, and I knew I needed to step up to the plate, so I struggled my way through some “real” pushups at the top of the stairs each round. At the end of the workout, we took our group photo, and I left feeling completely exhausted and completely satisfied.

That first workout was incredibly difficult for me, not only on a physical level but on an emotional one as well. It’s hard to put yourself in new situations. It’s hard to walk into something not knowing quite how you’ll measure up or what people will think of you. But that day, I knew that I would be coming back. Something in me had shifted. Even though it was only my first time, I knew that I had found something special.

This group, for me, came at a critical time in my life, as I feel it has for many with whom I’ve spoken and gotten to know at NP. I had moved to this city just a year before, following my graduation from college.  I had been living by myself and had found myself in a job with an incredibly isolating work environment. I was struggling to get back into running after 2 years off, due to a hip injury and the long, slow recovery from the resulting surgery. I was also coming off years of struggling with an eating disorder, and was falling back into the bad habits and destructive mindset that I had worked so hard to try to put behind me. I didn’t know what was next. I had identified myself as an athlete for so long, and now, running wasn’t fun. This thing that I had loved for so long seemed so far away. That person who had loved running seemed so far away as well.

That first workout reminded me what it felt like to be an athlete, and reminded me what it felt like to push myself for all the right reasons. That first (VERY COLD) winter brought me so much hope, a new community, new friends, and a new purpose. Running became easier (as did those pesky pushups) and more fun, and the amazing camaraderie I felt kept me coming back for more. Exercise began to take on new meaning, not as punishment or necessity, but as something that I wanted to do again. I kept showing up every week, because I knew my friends would be there to welcome me and then to push me. NP quickly became the thing that made me consistently happy each week, and it has continued to be that to this day.

I cannot believe how many amazing things have happened since that first workout 2 years ago. We survived several polar vortices on the stairs, we hit 500 people at a single Wednesday workout, we created a Monday and a Friday workout, we took over countless North Face races, and we took over DC with Arcade Motorcade, Better than Bedtime, and each of our respectfully disruptive workouts. I am proud to say that I can name very few spots in this city where I haven’t burpeed, box-jumped, wheel-barrowed, and sweat, all in the presence of the most positive people you could ever meet.

As I’ve watched this group grow in ways that I could not have imagined, from 10 people that first day to several hundred at any given workout now, I have also grown. I found the courage to quit a job that was slowly killing me, despite the good money I was making and the fact that I did not have the next job lined up. I found the strength and the support to train for and complete my first Half Iron Triathlon. I have become more relaxed, bolder, goofier, more compassionate- more like the “me” that I used to know and the person that I want to be. Kinda crazy that a workout group could do all that, huh? Yes, but that’s because we are so much more than a workout group. We are a family.

It doesn’t matter if you showed up today for the first time, or if you have been coming for two years. November Project is for you, and we’re PUMPED to have you. If you let it, this group will welcome you with open arms, quite literally. They will help you shed the layers that you have built up over time from struggle, disappointment, insecurity, fear, and, well…life. You shed these layers through sweat, hugs, and F*CK YEAHs. If you let them, these people that you sweat with will become your best friends.  They will make you better. You will make them better. I challenge you to let this community soften you, while the rest of the world tries to toughen you up.

What I really want to say, as my time in DC draws to a close (at least for now), is thank you. Thank you Danny, Steve, and Kaelan, for this incredible community that you have built. Your efforts, energy, and dedication do not go unnoticed. Thank you to everyone who #justshowsup and gives it their all every week. Thank you for making this city a place that I love and call home.

SO MUCH LOVE FOR MY HOME TRIBE.