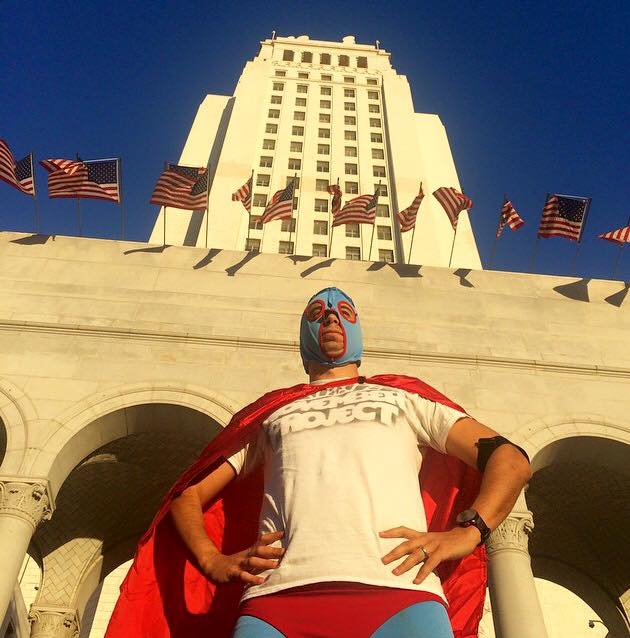 This is Jonathan. From the moment he joined us at November Project Los Angeles, he has been a wonderful member of this tribe. His humor is infectious, his weirdness keeps us comfortable, and he’s everyone’s number one fan. This is Jonathan’s story.

I’ve never been much of a baseball fan. So I find it funny that one of the most motivating pieces of advice that I’ve ever received came in the form of a baseball metaphor.

It was late August of 1997 and I was 18 years old. My father and I sat parked outside of a west Philadelphia dormitory, having just moved my things in. The previous summer, I had buried my older brother.

I don’t remember what triggered the piece of advice. Maybe it was my dad’s inherent need, as I started a new life chapter, to give me some last piece of comfort. Maybe it was instigated by the news that Princess Diana had died earlier that morning as if we needed a reminder that life was quick and sudden and that now he was seeing his second son leave his side in as many summers.

“You only hit a few REAL home-runs in life, maybe just 2 or 3”, he said. “The rest of the time, it’s good enough to just try and get on base.” I didn’t really know what he meant. After an awkward pause, I patted his hand, reassured him that I’d do my best and opened my passenger door to step out onto Spruce Street. I waved goodbye as he drove away, not really capable of processing my emotions or understanding the road I stood on.

Looking back, what my father said was true. You’re not always right and you don’t often succeed. In fact, you spend most of your life wrong and in defeat. But you never stop trying to just “get on base”. You never stop swinging for those rare home runs that would one day show the world (and yourself) what you’re capable of.

Almost 20 years later, and much closer to the age of 40 than I am to that Philadelphia dormitory, I have yet to really hit a home run. I’ve probably spent the majority of my time being completely wrong, often feeling like I was constantly behind the people around me, maybe going in the opposite direction, just there to watch everyone else succeed. For almost the entirety of my 20s I deep down believed that I was the wrongest of the wrong, the teenager who had called his older brother late one night in June to invite him over but in doing so had put him on a road with an oncoming drunk driver.

As I entered my 30s, being this wrong started to feel like a joke. I thought more and more about the home-runs my father told me about and what they looked like. I’m a filmmaker, and I had enjoyed some small success upon first moving to Los Angeles when I was 24, with an award winning film and a comfortable stream of clients that would last me a few years. But as I tried to move to the next tier of my career, there was an invisible ceiling that I kept running into. No matter how hard I swung, I couldn’t help feeling like I was being kept out.

In the meantime I’d gained a loving wife, a home, a stable of friends, three dogs and a comfortable life. The podcast I’d record each week was popular and I could support my self by teaching film at local colleges. But I still wanted to feel the crack of a home run. I was still swinging. But I’d grown disenchanted with the game I had been playing professionally. I looked out on the entertainment industry’s insincere landscape, where the frauds and copycats were rewarded handsomely while the genuine voices were only good for being sucked dry of all their beautiful ingenuity, discredited and cast back out of the club.

I started running. I didn’t care. At 30, I just needed a win. Something had to change inside of me. I started with some obstacle racing. The first thing that anyone tells you who hates running is that they find running to be boring and solitary. I agreed. But obstacle racing was my immediate cure for this. But my friends soon got worn out with the constant entry fees and drives to distant places (like Temecula!) and I quickly found myself alone again.

But I had these little participation medals. I put them on the wall next to my dusty film awards, eventually realizing that as my career continued to languish like all of the unwanted screenplays also collecting dust in my desk drawers, they were my little hits. And the little participation medals grew. And they called to me like stories used to. “Can you run a 5K? How about a 10? A Half? Can you finish a Spartan Trifecta? A Marathon? ” They started to possess me, leading me down a trail to where these little hits would come and I would collect them and hang them, hopefully working my way to getting back on base.

Soon my stories returned to me. I would discover them as I ran trails in Griffith, or the Santa Monica Mountains or up on top of Mt. Lukens, looking out on Los Angeles. I’d hear my characters clearly and get lost, thinking about my stories, the life I was still building, my two brothers. I would think about constantly being wrong and how it was as inevitable as death and how it was okay to embrace life’s defeats as the tests that they were. As I kept going, I realized that I had made it to a place where I no longer hated myself for the choice that I made as a 17-year old kid and that somehow I had grown stronger from getting up after all of my repeated defeats.

And that’s when I started to hear what my father had been saying, the glass half full version of what in my grieving I had only heard as only a half glass empty. In wanting to hit ONLY home-runs, I had grown frustrated in never hitting any. But by contrast, in wanting ONLY things to be right, I had ignored the great strengths I was gaining in often being wrong.

So I remember vividly being wrong (yet again) in November of this past year. It was 6:15 in the morning and a friend had convinced me to meet him in the dark parking lot of the Hollywood Bowl for a workout or a run or a “just show up, it’s kind of weird and hard to explain”. My friend never actually showed up that morning. He slept through his alarm. I remember walking up cautiously, intimidated by the growing whispers that your little silhouettes made as I got closer. And I still remember my first impressions of every single one of you, you curious, beautiful, unique little weirdos, and how wrong those impressions were in retrospect.

Mainly, I remember Jesse. I remember that I wasn’t going to like him. He was loud and fit and at least 10 years younger than me. He was showing all of the signs of being exactly why I WASN’T in a gym that morning. He appeared to be young, dumb and full of… uh, vigor. And as he walked towards me with a smile and a hug I just wanted him to get the fuck away from me. Until he actually hugged me. And then I realized that I was wrong. Again.

Jesse’s one of my best friends now. You all are. When he learned that my car was in the shop a few weeks ago he said “hey, why didn’t you just call me? I’d have driven you around” as if he had nothing better to do on a random Tuesday than to be my friend for the day or any other day. I get that response from a lot of you. I don’t have a word for it, this strange, ephemeral responsibility we have for one another, other than maybe Friendship. Or Brother. Or Sister.

On the first Wednesday of this month, Kently bestowed upon me the Tribe’s Commitment Award. It was June 3rd. I remember it because my brother was killed in June. That was 19 years ago. It became the way by which I kept time. June is the month that my soul hangs low. It’s always tougher to do things in June, like get up in the mornings or smile at the people around you. Some things are easier, like the flash floods of uncharacteristic rage that help you throw your iPhone across the room, punch something when you’ve walked your head into the freezer door or hang on your horn when the person in front of you hasn’t turned left on that pregnant yellow. My anger and depression and sadness are the only things that come easy in June. So thank you, Kently, for being my sister, and doing something that only a sister would do for her brother during the most difficult month of his year… even though you didn’t really know you were doing it. Or maybe you did. I seem to have that connection with many of you these days.

And thank you, LA Tribe, for the Pop Up workout coming up on June 29th. That’s the date, the date he was killed and the date my life changed. Did you know that, Orrin? Did you somehow know that that is the date each year where I’m at my weakest? Kently said you that all would carry me on that day if it came to that but I really don’t think it will. So thank you for putting it at 6am, a little earlier than our normal workouts and too early for me to spend much time alone in my thoughts (but early enough to spend it with all of you).

So, baseball. That’s the sport that I was as wrong about under appreciating as I was wrong about Jesse and the rest of you on that day back in November, 6 months removed from this horrible month of June. The old film awards, the medals, your friendship. I look at them collected now most mornings and I realize that they are all parts of the same game of baseball, these disparate, wonderful moments that have kept me swinging long enough to have a chance at something bigger.

I realize now that what my father gave me that day wasn’t a piece of advice that I wasn’t capable of hearing but something else entirely. It was something that I actually really needed but wouldn’t be able to grasp until later: confidence. Not the confidence in the success of hitting a home-run, because those things rarely come. It’s the confidence found in the smaller things, often lost in-between. It’s the base hits, the at bats, just getting out of the dug out. There’s confidence found in celebrating the low days, in being carried by your community, in just stringing together some small wins because you can’t really gather much else. It’s learning to aim for patient, palpable progress instead of ever-evasive perfection.

The small confidence keeps you in the game. It keeps you swinging. It keeps you hungry for that home-run but not devastated when you strike out. Again. And again. And again. And again. It’s the confidence found in being lost down in the nicks and cranny moments of our lives where no one cares to look or remember. These wandering moments are the majority of our time here. I learned to embrace them. The valleys that made the peaks visible. Sewn together, they form a confident, unbreakable tapestry of our collective. I’m reminded of that confidence on most mornings when I see your gathered faces.

It’s the confidence I found in being wrong.

Thank you, Jonathan. The tribe is strong.