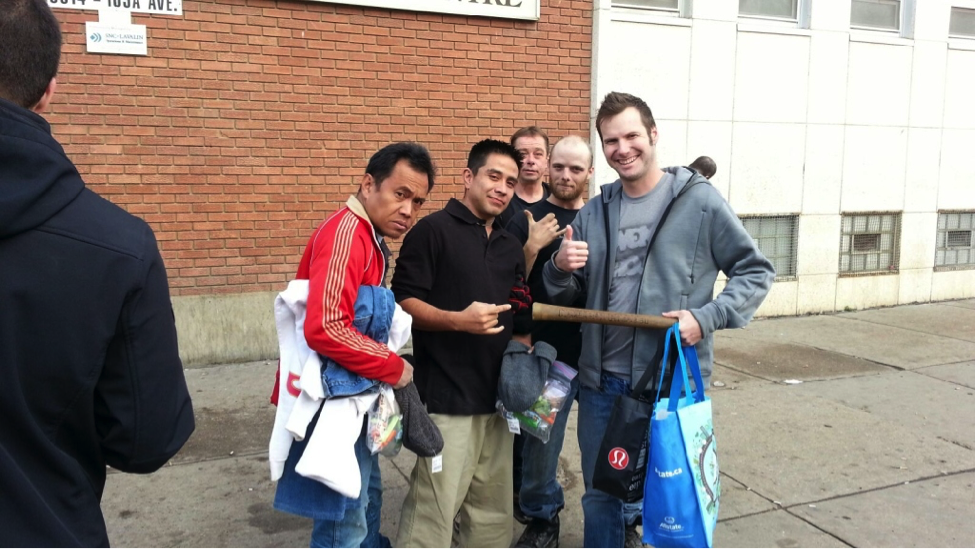 When we give out the Positivity Award, the recipient will usually take a few photos with it and send it to us to see what they have been up to with it. This past week’s winner took things to an all new level, and you’re about to read how. We’ve already told you how he is one of the kindest, most genuine tribe members we have. And how he recruits for the tribe, squeezes in our workouts even when he has to be at work by 7, ran his first 10 km race in October with the tribe….he’s also creative, he dresses up for our costume days and he always has a smile on his face. I am so incredible proud for you all to meet Greg (from YEG):

It was a cold Friday morning at 5:00 am. My alarm went off, I hit the snooze and went back to sleep…

Let’s go back in time a couple years when my journey began. I was in a job I loved, but could barely get through each day without burning out. My job was my life, no balance, nothing else, just work. I started taking the wrong avenues for help. I went down some dark paths looking for comfort but constantly came up empty. I lost friends and I lost myself. There was a void in my life, it wasn’t me. I knew I could be better.

The definition of insanity is doing the same thing over and over and expecting a different result. I knew I needed a change. It’s always hard to think of sacrificing something you love so much but it needed to happen. I left the job that was my everything. I was officially on a journey of discovery hoping to find myself. With all my family on the other side of the country, I didn’t have many people I could turn to. Those friends I could, were my rock, I realised life is very hard to go through by yourself. I got a new job and started having a better work / life balance but it somehow felt as if I was just going through the motions. I had yet to find myself. I went across the world, to see if that would do it. I spent time in the rainforests of Borneo rehabilitating and caring for Orangutans and other exotic animals. I followed that by island hopping through the South Pacific. It helped, but even after those amazing experiences, something was still missing.

Finally when I got back, I started hearing about something called November Project. It was on the radio, popped up on twitter a couple times and I read an article in the paper. I decided I was going to start getting into shape. I hoped that would help me feel better. And I’ve now come full circle, fitting as t is circle month after all!

It was a cold Friday morning at 5:00 am. My alarm went off, I hit the snooze and went back to sleep…I turned off my alarm and said maybe next week.

Most people’s November Project story ends there. A suggestion from a co-worker or friend, a good intention, and a snooze button. Not mine! The stars must have aligned that following Friday because I actually got up. I didn’t know how it worked. Do I have to sign up? Do I have to fill out a waiver? Is there only capacity for a certain few? Let’s just say I showed up an hour early and sat in my car wondering if I was at the right place. About 10 minutes before it was supposed to start cars started rolling in, runners ran in and bikers rode in. I guess I was at the right spot. I followed some people up the hill and the music got louder. Everyone was smiles, hugs and high fives. I was intrigued. Then we all got called in, we bounced and then the question went out, “Who’s new?. I put up my hand, they cheered and without notice a flood of high fives hit that hand. I think the moment I officially got hooked was when we were asked if “Ya’ll good?”. I’ve never heard so many people swear in unison before. F@ck Ya! These people are good, F@ck ya! These people are awesome. The hugs, the high fives, the positivity was insane. Were these people family? Do these people all know each other? I had so many questions still.

The following week I came back, I was having a rough week and was really struggling with the hills. Two gentlemen came running up alongside, they introduced themselves as Paul and Robin. They told me they were happy I came. We had a conversation but I was losing breath and told them not to let me hold them back and to continue on without me. Robin looked me in the eyes and said “We’re not leaving you behind, you can do this!”

Wow, how can a stranger believe in me when I was having such a hard time believing in myself? It was motivating and inspiring. These people all started from somewhere. We’ve all been at the beginning. We need to believe in ourselves but sometimes it takes a reminder from someone else that we can be better. We can do anything we put our minds to. If there’s a will, there’s a way.

I’ve now been attending November Project on a regular basis since April. And you know what? I’ve found myself. The piece missing in my case was family. Maybe not blood but a family that believes in you, gives you words of encouragement and will elevate you beyond your wildest dreams. You my tribe are my family, my inspiration and my motivation to be better. I never would have believed two years ago when I was in such an awful and depressed spot, I would be celebrated for my positivity. You changed me tribe, you mean the world to me.

As the saying goes, “With great power, comes great responsibility”. I used the opportunity of having the Positivity Award in my possession to spread positivity to some of those who needed it the most. To let people know they are cared about, people who maybe haven’t heard it in a while. Give back to a community that has given so much to me.

Today myself, the Positivity stick and 3 tribe members (Tanis, Manon and Dan) hit the streets with Toques, gloves, socks, clean underwear, gift cards and homemade cookies. We met wonderful, grateful and loving people who were just down on their luck. It turned into an inspiring day. I was personally touched when Manon had handed everything out and there saw a woman pushing a man in a wheelchair who hadn’t received anything. I watched Manon take the beautiful scarf from around her neck and hand it over to a stranger without hesitation. The woman put it on with pride and a huge smile.

This is why November Project exists. Health, community and love is not just for those who can afford it.  It is for everyone, no matter your background, age, ethnicity, gender, sexual orientation or social status. No exceptions! For this November Project I thank you. You make our community and individuals better. Without you, I couldn’t have been me. I love you all!

Here are a few pictures from our day of positivity….

One Reply to “The Positivity Award hits the streets of YEG…”