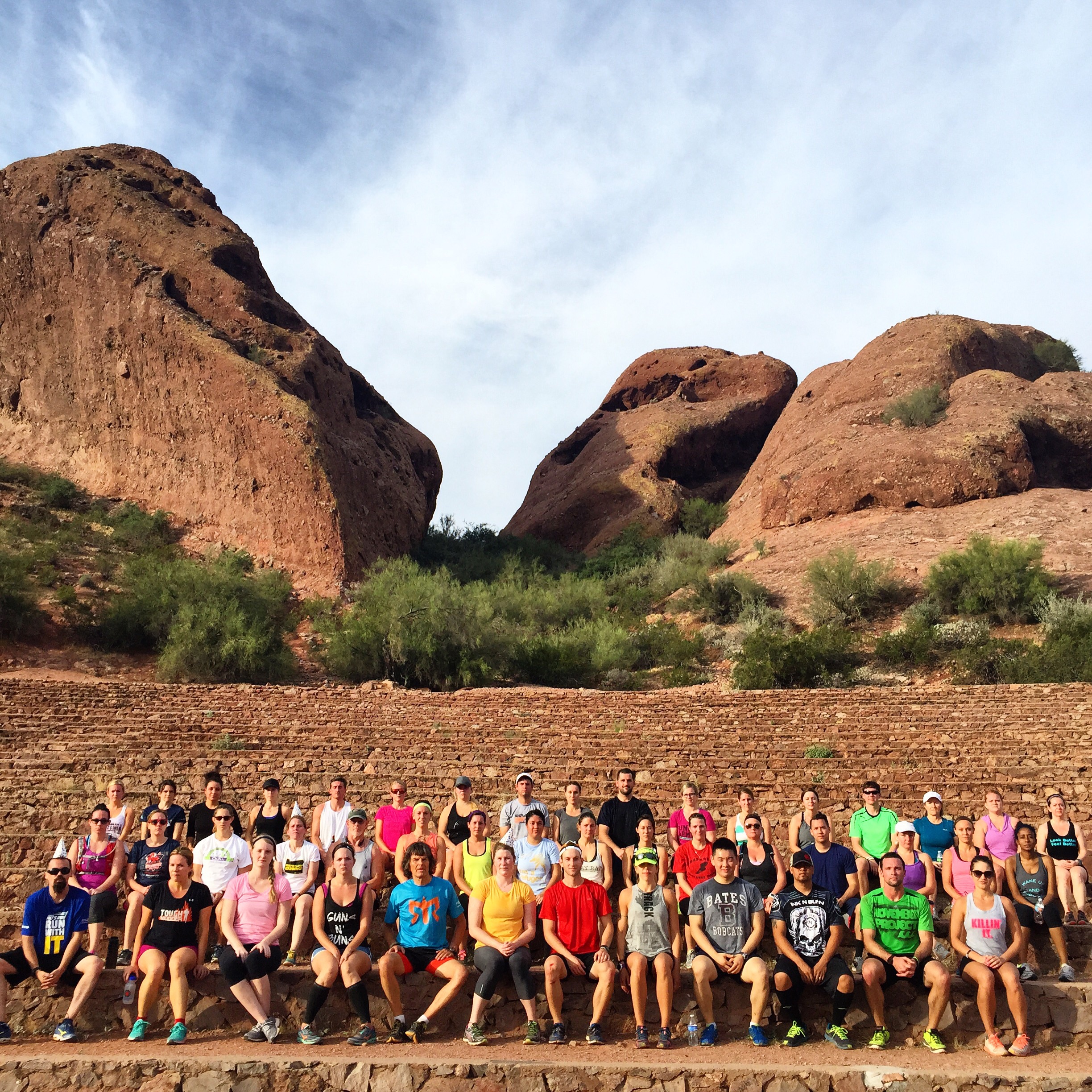 Jackie, Trevor, and the many faces that have made up the last number of weeks of the November Project Pledge process here in Phoenix have gone on faith. They believe in what they were told in Runner’s World back in December 2013. Jackie believes in her perspective shift when she discovered Danny & Steve and November Project DC on her 3 month stay there just a year ago. Trevor believes in what the Padula-trio at November Project San Diego brought to his life both physically and socially over the last year and wants to build something as strong in his home town. These two pledging co-leaders are believers in what all of us our building in all 19, 20, 21, 22 cities (or however many we have coming down the line right now). They believe in good people and fierce efficient workouts that happen at sunrise in any weather condidtions, they really do.

My wife (/personal yoga instructor) and I loaded onto a one-way flight to Phoenix yesterday, unsure what this whole thing would look like. Dark red dirt, great views, and deathly hot heat were on the menu for the Wednesday morning workout at Papago Park based on what we’d been hearing. What we didn’t know is that between Jackie (the blonde, upbeat, around the world runner who was first on the scene to #NP_Pledge here), Trevor (the dashing gentlemen in green, who’s haircut makes Adam Levine look like a bum), and all of the shared social media hype heading into the Pop-Up workout, that we’d have a gathering of people who perfectly fit the November Project standard. Kind. Fierce. All-levels of athletes. All shapes and sizes. All ages. An overall “We got this” vibe. We, it is always the collective WE. And at least one dog.

At 5:50AM SHARP the group leaves the parking lot on foot for 0.8 miles of simple trail that lead to the Papago Park Amphitheater. At 6AM, that’s right, 6:00AM, the group gathers for a bounce, for an exchange of hips-in hugs, and a few FUCK/HECK YEAHS. The work was assigned and the culture was laid down by yours truly. A few minutes later the group lined up shoulder to shoulder ready to work. The workout was a simple 30 minutes run/jog/walking up the larger seats, down the smaller steps, and around the shared turnaround point (my BW backpack). As I looked at the line waiting for the countdown to set them into motion, I couldn’t help but think of Emily Saul standing in the newbie meeting in Boston, as Deniz & Evan sent the 6:30AM group off in waives of 10-20. Back to Phoenix and the struggle was real, even for the best athletes in the group. The heat was less than brutal, which was a nice surprise. In the end, all 43 athletes lined up in three rows at the end to take a group photo before heading off to “real life.”

At this pace, the final day of pledging for the NP Phoenix group should be the last Wednesday in June, making the first official day (if all goes well) July 1st. Between now and then, the Co-Leaders who have stepped up to build this beautiful beast of a community will need your help. Each Wednesday, send your athletic and non-athletic pals to this powerful movement happening right here in Phoenix. Don’t bounce a thousand excuses about getting to work, not being a runner, and “not being a morning person” off the unforgiving walls of the universe. Instead, be the fitter more fun version of yourself. You can try this thing one time, try meeting new people (the thing you claim to be into), try on something outside your normal week of training or laziness. Get your ass to the parking lot called “West Butes Parking Lot” and become a part of something beyond fitness and socializing. Build November Project Phoenix now when they need you the most. And for selfish reasons, give us a reason to join you in celebration on July 1st.

Oh, one last thing (and thank you for reading this far). A NEWS helicopter didn’t just pass by or hover over the workout, they fucking HUNG OUT OVERHEAD for a good deal of the workout. I can only assume that they saw the well-crafted Tweets and thought they needed to send in for aerial views of this scene, so that the world of TV News could see what magic is going on as this pledge becomes a tribe. That is all for now…