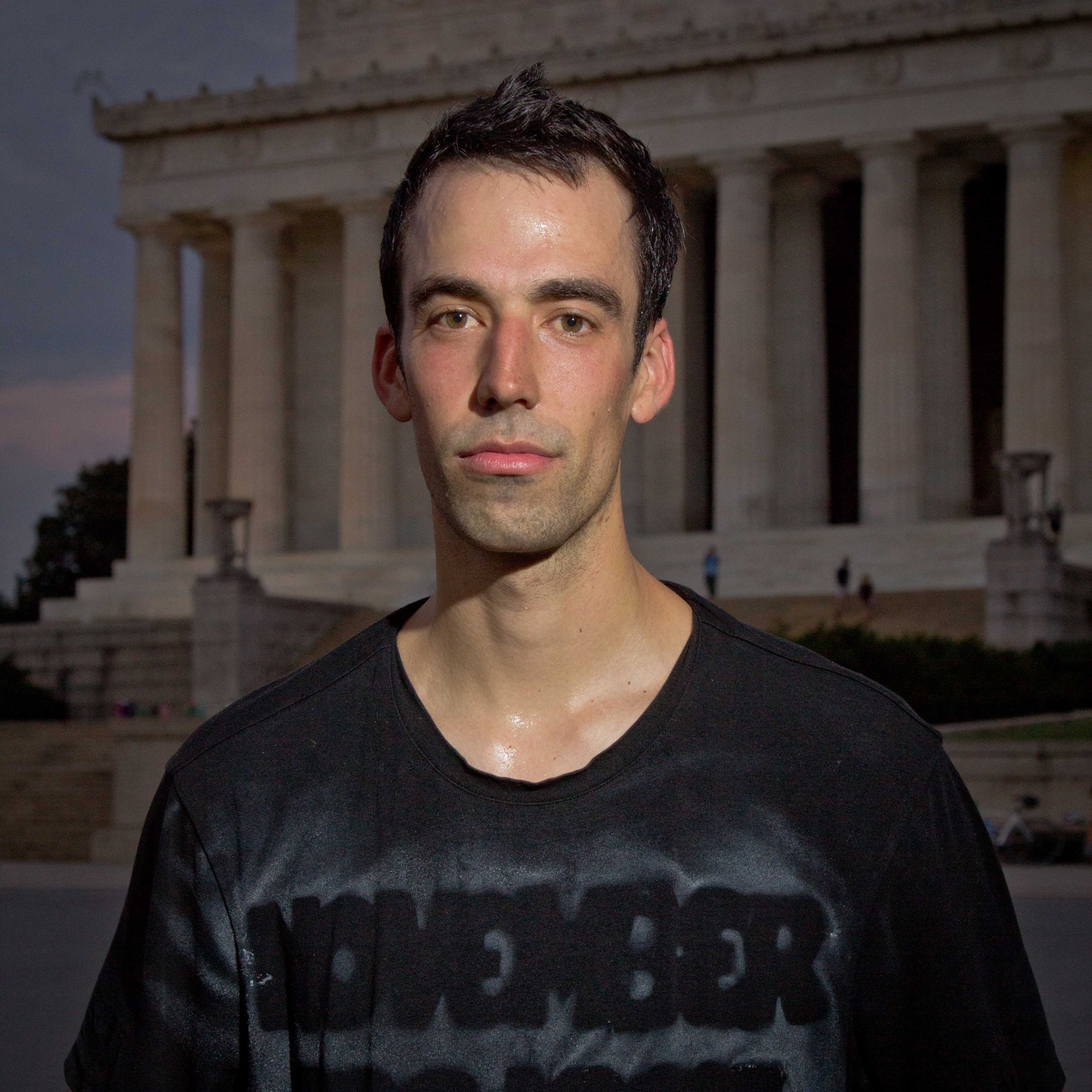 There’s so many good things to say about this week’s guest blogger. Passionate is one word that comes to mind. But instead of listening to me ramble, listen to this man:

It’s Tuesday, Oct. 27 around midnight, and I’m sitting at an otherwise vacated table at Walter’s Sports Bar in the Petworth neighborhood of DC. My friends just said their goodbyes, calling it a night as Game 1 of the World Series has dragged into the 12th inning. There are just four other people, strangers, in the watering hole. But there’s no way I’m leaving a World Series game before its conclusion. I’m a sports nut.

There’s also no way I’m not waking up at 4:43am the next morning.

November Project “PR Day” beckons. At the moment, the idea of pulling myself out of bed in a few hours seems absurd. But then my mind wanders to the hundreds of “NP” workouts I’ve been to, dozens on just a few hours of sleep, and I ask myself, “Has it ever not been worth it? Have I ever left an NP workout saying, ‘Wow, that was awful. I should have stayed in bed?’”

Finally, the Royals close out the game in the 14th inning at 1:09am. The 4:43am alarm isn’t a friendly one, but once I’m on my bike heading to the Lincoln Memorial, I know it’s going to be a great start to my Wednesday.

As crazy as that sounds.

When I think of November Project, myriad positive thoughts come to my mind. Chief among them: this movement, this Monday/Wednesday/Friday routine (and so much more), has helped me find my kind of people. 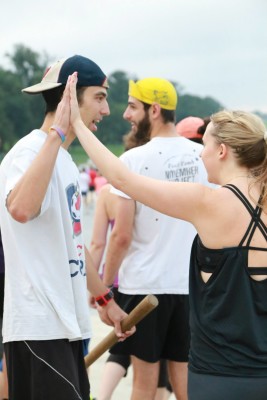 For the first time in adulthood.

For five and a half years, I struggled to discover people in Washington, DC, who were as nutty as me — who would go on runs, bike rides and hikes on a whim; who never let the cold air or what was falling from the sky dictate what they’d do; who would walk 62.1 miles, or hike 35, in a day. I went on a few hiking trips with Meetup groups and yeah, they were all right, but I never met anyone whom I just meshed with, who wouldn’t hesitate in saying “hell yeah!” to a winter hike or a 9am soccer game on a rainy Saturday after a late Friday night.

Everyone around me called me crazy, and I didn’t necessarily disagree. But I knew from experience how much fun outdoor activity in all weather could be (I’ve never, ever not enjoyed a hike), and I knew — or at least hoped — there were people, in this city overflowing with those my age, who shared such traits.

A year ago, I found those people. I discovered November Project. I started running hills on Mondays, devouring steps on Wednesdays, and working out in neighborhoods throughout the District on Fridays.

Suddenly, I was hooked. It didn’t matter at first that I knew nobody. Just the fact that there were scheduled, FREE workouts in the middle of the winter outside was enough to get me out of bed. I’ll never forget the Friday last February when we met in Pershing Park and the windchill was probably -10 degrees. We lunged up stairs packed down with snow, jumped up and down on snowy benches, and then at workout’s conclusion, we laid down in the white powder to form a giant N and P. 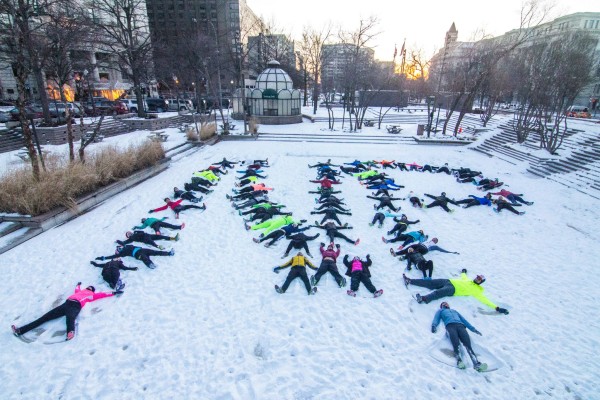 Pretty soon my coworkers started noticing that I was happiest on Mondays, Wednesdays and Fridays — but especially Wednesdays. There was nothing, and still is nothing, in this nation’s capital comparable to running up and down the Lincoln Memorial’s stairs while watching the sun rise behind the Washington Monument (a picture I try to paint with words for anyone who will listen). Week after week, I basked in the glow of those sunrises, and whatever followed on those humpdays could never spoil how they had begun.

It took a couple months, but I started getting to know people — fellow crazies. That’s what happens when you just show up to November Project consistently. You become part of a community. People recognize you. Names are exchanged. And then forgotten. And then exchanged again. And finally remembered.

I joined the social Facebook group, and my mind exploded. Wait — these people didn’t just settle for M/W/F running and “spice,” but also did early morning track workouts on Thursdays, and long runs Saturday mornings, and bike rides nearly every weekend? And everyone was welcome, and encouraged, to join — regardless of fitness level, location, age, or any other barrier that might regularly be brought up as an obstacle to doing something?

And did I mention that everything was free? And followed by food and more camaraderie?

March was amazing (morning workouts, nights full of March Madness watching); April was incredible, capped off by a trip with my Dad to the Grand Canyon. When I returned, for the first time after such an adventure I had more than a handful of people interested in hearing about my epic trip. My 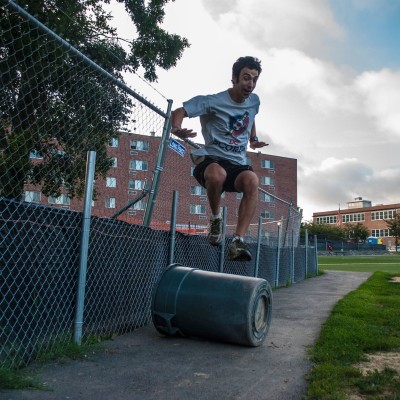 new crew of adventure-seeking friends wanted to know all the details about descending into the depths of the canyon and to Havasu Falls. And also if they could join me for my next trip?

Then came May. Two of the group’s incredible leaders, Steve and Kaelan, announced that we’d be competing against November Project San Diego in a month-long Charity Miles competition to see which city could run, walk and bike the most (not just in NP, but in general). I was intrigued, because I like competition, but didn’t make any kind of plan.

On the second day of the month, my NP friend Steph — who had also introduced me to doing “doubles” on Wednesdays, both the 5:30 and 6:30 workouts — and I went for a bike ride on the Mt. Vernon Trail. I decided to use the Charity Miles app for the first time. At ride’s conclusion, I gazed at my phone and noticed that I was in second place in DC, trailing only Steph. When our leaders announced the next week that the month’s male and female winners would get TomTom GPS watches, it was game on.

In May, I biked more than I had in six years since going down the West Coast. Every weekend, the newly formed “DC Biking & Brunch” group went for a ride. In the evenings instead of lazing on my couch, I did 20 miles on the Anacostia Trail. In North Carolina with my family for a weekend, I took the bike out before breakfast to ride 8 miles. After the longest work day of the year May 30 and three post-event beers, I rode 25 miles in Alexandria, only pausing to gaze at the airplanes flying above Gravelly Point.

My new friend Allan, Steph, and I exchanged the lead several times. We pushed each other, motivated each other. And on the final day of the month, a beautiful Sunday, I rode 73 miles to reach 683 total. Even if I hadn’t won, May 2015 would have lived on like it has and will continue to do so for years. Inspired and joined by other crazies, I had averaged 22 miles on my bike during one of my busiest working months of the year — in addition to those M/W/F workouts.

I had discovered a new level of capable. 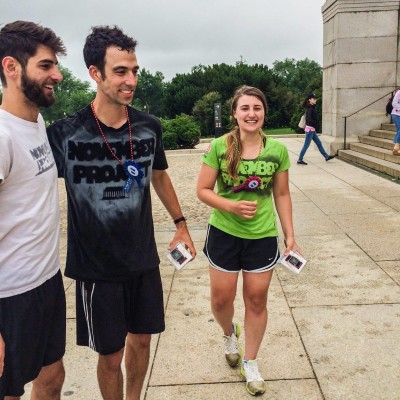 I realize I have a problem writing long, and scribing about NP’s impact on my life makes brevity especially difficult, so I’ll cruise through the rest of the best year in my life.

Because of November Project and a group of people who are reliable, fun, adventure-seeking, and always up for the next thrill, I have done things I’d never ever thought of or at least made happen including: 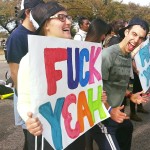 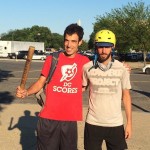 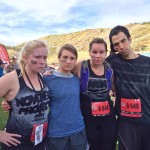 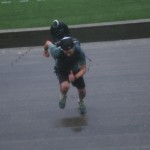 I could go on.

And when Snowzilla hit last weekend, a year after I began this whole thing, there I was along with an exuberant group of friends the Monday after the storm running up and down snowy 15th Street, breaking up the hills to shovel out cars from the monstrous storm.

It was crazy. It was insane. And it’s exactly how I wanted to start my Monday morning.

Thank you, NP, for changing my life! Now that doesn’t sound crazy at all.

P.S. — This should be obvious, but you don’t have to be crazy to participate in November Project. Simply, show up. You’ll never regret doing so. To this day, I’ve enjoyed every single M/W/F. 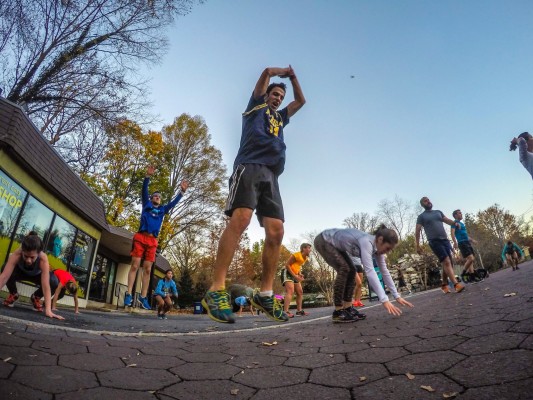