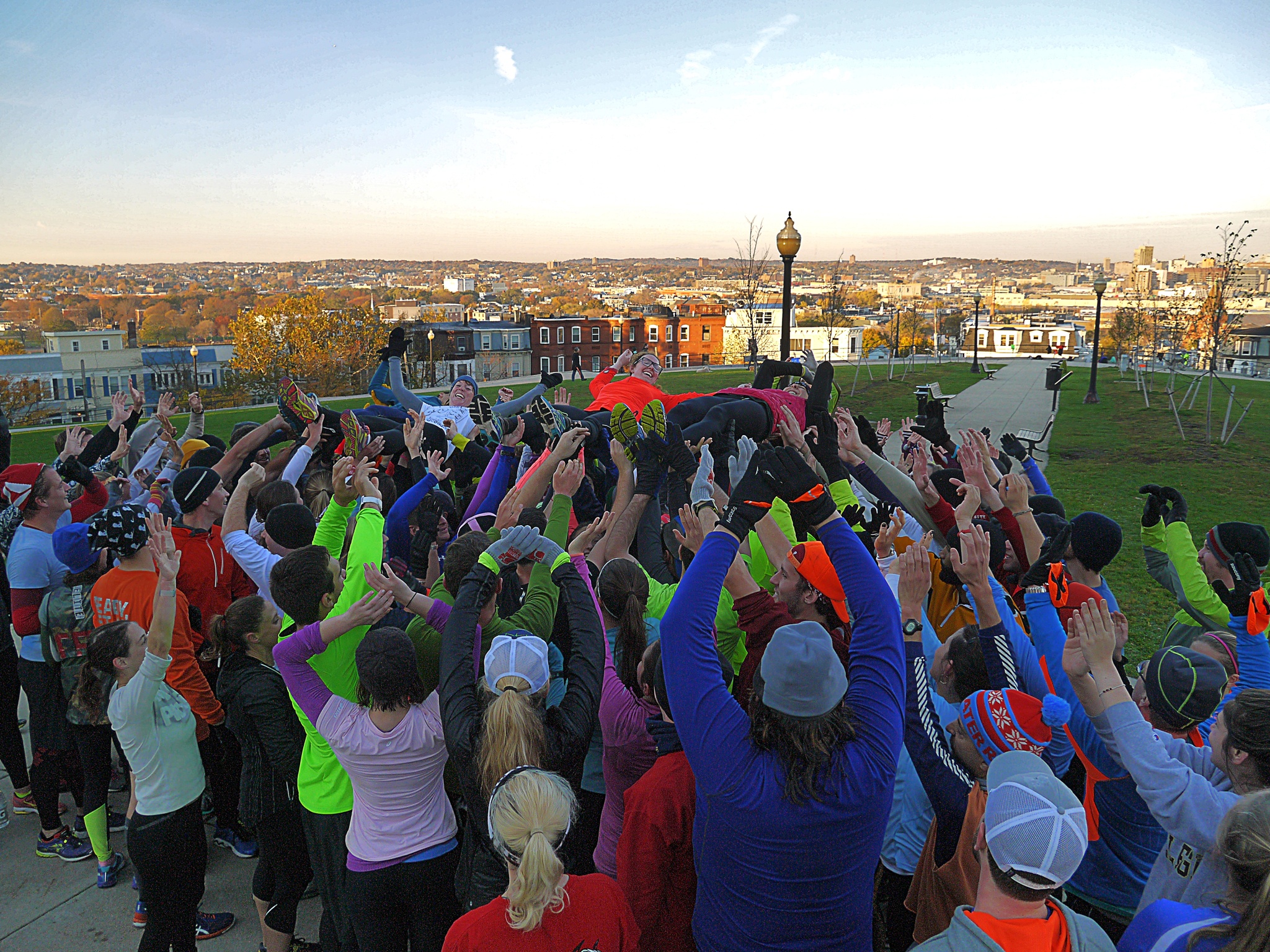 If you were one of the lucky ones who were able to find the Destination Deck at Dorchester Heights this morning, then you may have experienced the wonder of a few notable things. First, an historical location very few of us knew about, which was the place where American soldiers occupied ground in the final push to get the British army to evacuate on March 17, 1776. Also, the satisfaction of hoisting ourselves up with a partner while overlooking Carson Beach, South Boston, and the downtown Boston skyline–one of the highest points in Boston. And if your technical precision while doing Hoisties included your ass cheeks kissing the ground on each one, you got a little extra wonderment.

I’m glad everyone showed up this morning because it was the “height”–the highlight of my day. I love starting Mondays with a run from my neighborhood in Dorchester through the dark streets, weaving through sidewalks, past cars, into new territory as we make our way to a new destination. I love that we all had to climb a hill almost as steep (or maybe steeper?!) than Summit to get there. And I love how freaking hard everyone worked this morning.

The workout was badass and hard. You can thank Deniz’s maniacal mind for those wheelbarrows!  We started by splitting into two groups, and running in opposite directions around the outside of the park, down a ramp and up a fun set of stairs. Groups re-joined at the monument where everyone did 10 air squats, then partnered up to wheelbarrow down the middle of the park to the starting point. Wheelbarrow-ers switched half way across the park, and the final element was 10 beautiful Hoisties at the starting point, before continuing the loop. 18 minutes later we were done. I know many of you were racing your asses off and made it around the loop a record number of times. Remember to RECORD YOUR SCORE by indicating the number of reps around the whole loop you completed. Get your friends to record their score and see how you match up. And for your friends who didn’t show up this morning, you can still show them your score and invite them to get up next Monday so they can have a score too.

We had celebratory hugs to finish the workout. Then we took our 4 tribesfolk celebrating birthdays today and brought them even higher by crowd surfing them as we sang “Happy Birthday.” We finished off the morning together by watching Evan climb to new “heights” for the group photo.

Why do you think George Washington’s army occupied the hill we were on this morning as a strategic place to fight the British army?  I think it has to do with the view, and the fact that when you put yourself in a place where you have good perspective, you can make good decisions.  When you can see clearly what’s important, it’s easier to do the things that help you accomplish your goals. Funny, that’s what NP does for so many of us.  It gets us up to the heights where we can see things from a different perspective and maybe it changes the way we attack each day. It helps you focus on 18 minutes of hard work, even if you hate wheelbarrows and cursed Deniz under your breath the entire time you did them.  It helps you see how good you feel when you work your sweaty ass off in the chilly morning air.  And when you’ve gotten up, worked hard, and feel stronger than you did before, then you take on the world and the rest of the day in a new way.

Maybe we didn’t fight a revolution this morning, but we went to the Heights, we fought through every hard minute of work and we hugged it out at the end. Hopefully that gives you a clear perspective for starting the day, and the week. Have a kickass day.  See you at the Stadium!