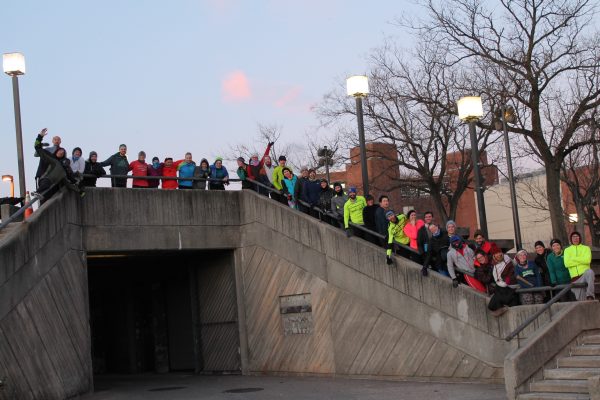 In 1808, as tensions built between the American colonies and The British, a Baltimore based vessel named the Sophia was intercepted by the Brits as it crossed what I can only assume was an ocean. The Sophia was carrying a whole bunch of gin, which of course the British naturally decided to tax. When the Sophia gets back to Baltimore the good folks of Baltimore are livid….who are they to be taxing all of our GIN!? A good deal of stomping around and huffing occurs before the Baltimoreans decide enough is enough and set themselves to destroying all of the gin…which seems like a questionable protest if you ask me but hey, who am I to judge the Baltimoreans of 1808.

The Baltimore Gin Riots are what followed as thousands of sailors and civilians stormed to Hampstead Hill (which guess what, is the same damn hill we run on Fridays! That’s right…Hampstead Hill is Patterson Park!) and burned over 700 gallons of gin. BURNED IT. ALL THE GIN!

I can only presume that after all of the Baltimoreans burned all the gin, there had to be a few individuals that may have regretted the action a bit. I mean, yes, we get it, you really disliked the British, but now you dislike the British AND you have no gin. Regardless, it was four more years of protest and Atlantic Ocean tension before we actually declared war, but the Gin Riots were a pretty big part of getting this whole War of 1812 thing going.

So you’re probably wondering why we are telling you this!?

We’re really excited to be bringing you a new race on January, 28th. In honor of this little bit of Baltimore history as well as the location of the race we’re bringing you a really tough, really awesome event called The Gin Riot.

The Gin Riot is a race loosely based on Boston’s #WOAHman, we’ve designed a race intended to challenge everyone, regardless of how fast you are. We will gather at 5pm on January 28th at Rash Field. Everyone will be given a Gin Riot bib and we’ll kick off the race. Here’s how it goes.

We would also like to *heavily hint* that there will also be a rematch which we will announce at the race that night. Maybe you won The Gin Riot and want a chance to defend your crown, or maybe you just want a chance to get a better time. Make sure to join us on  January 28th to race your ass off and learn about the second part of the Gin riot series.

Got it everyone. January 28th. 5pm. THE GIN RIOT. #THEGINRIOT (For social media purposes)

The workout today was fun, but this is more important. So put it in your planner and DON’T FORGET IT!

*On another note. Congrats to the folks that won the Virginia Beach Shamrock Marathon bibs: Aliya Reich, Liz Cutting and Wen Zhahn. I believe all these fine folks will be running the Half Marathon and shredding the damn thing. If you’re interested, head down there and cheer them on. It’s the weekend of March 16-18. More info to come on that!