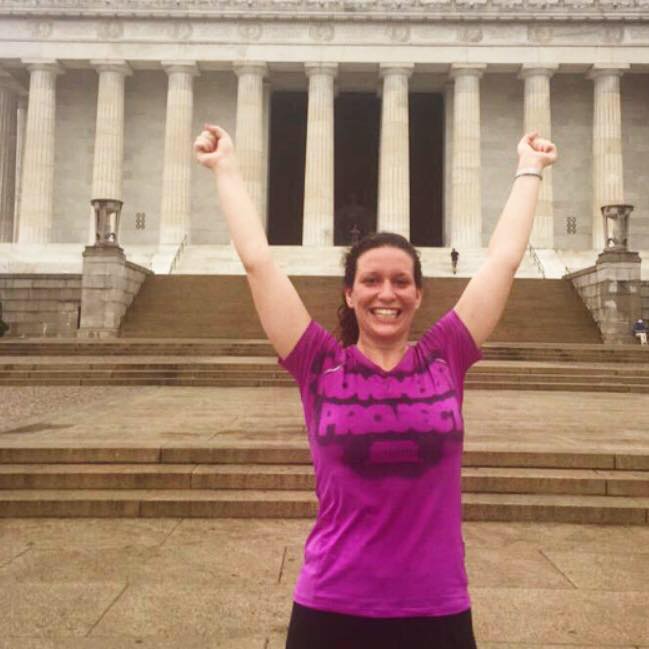 FRIDAY we are back @ Lincoln. There WILL be a 5:30 & 6:30 group. Come get historical and invite EVERYONE. HYPE TO THE WORLD #JustShowUp.

Today’s blog post comes from afar. Someone that has trained with us week after week and now her proximity to DC (or lack thereof) doesn’t permit MWF attendance. She was a core smiling face among the many and ALWAYS pushed herself to new heights. She continues to do so in the distant land of Alabama. Ladies and gents, Claire:

I intended to write this in February but didn’t. NP taught me not to use excuses 🙂

Growing up, I was always athletic – I was on a swim team from the time I was 6 until I graduated high school and also spent a few years of high school on the crew team. But throughout that time, I was never much of a runner. I would always “forget my sneakers” on days that we would run at swim practice. In fact, it happened so often that my coach would sometimes just make me run barefoot. One year, my swim team did a mini triathlon and the only person I beat was the girl who got a flat tire halfway through the biking portion… Needless to say, I hated running and thought that would always be the case. When I got to college I joined the club water polo team and really loved it for a couple years. However, as I got busier junior and senior year, I had too many scheduling conflicts and I quit the team and all but stopped exercising save for a gym visit once or twice a month.

By that point, working out just wasn’t fun anymore. I had lost the camaraderie and team atmosphere and encouragement and goals to work towards and accountability and regularity and mentorship and everything else that comes from being on a team.

All of that changed when I moved to DC after graduation. A girl I had gone to college with kept getting tagged in these group pictures on Facebook with captions talking about how great Mondays and Wednesdays could be. I was intrigued (and also confused) and decided to give it a try. While I never became a truly consistent NP regular, being able to be a part of the NP community and just show up has forever changed my perspective on fitness. (Of course getting to work and become friends with Melanie Fineman didn’t hurt either!). November Project gave me everything I loved about organized sports growing up and yet so much more. I learned that exercise doesn’t have to be expensive. I learned that working out doesn’t have to be boring. I learned that you don’t have to dread running. I learned that people can be kind and supportive instead of just competitive. And most importantly, I learned that running has the power to create incredibly supportive spaces, can bring people together in an extremely unique way, and can help make a new city feel like home.

In late September, I left DC to move to Montgomery, AL for a job. I knew no one. I met a girl at a bar one night and we got on the topic of running. We decided to go for a run together a few days later and she quickly became my closest friend in Montgomery. We signed up for a local 10 mile race that we hadn’t trained for, but looked at it as a “fun morning activity.” As I hit mile 9.5, I was exhausted, hurting, and counting down the seconds until I’d be done when I heard someone yell “Hey! Where’d you get that November Project shirt?!” I looked at them with the biggest smile and ran that last half mile remembering the support I’d always gotten from the tribe. The next week, I signed up for a half marathon training program with the local running store.

The training program provided me with my first community in Montgomery and gave me the confidence to start running with coworkers who then became friends. As the runs got longer, I found myself with plenty of friends and mentors to help me go the distance. When I crossed the finish line of my half marathon, I did it with the support of so many people who knowingly and unknowingly made it possible for me.

Lots of love and gratitude, Claire