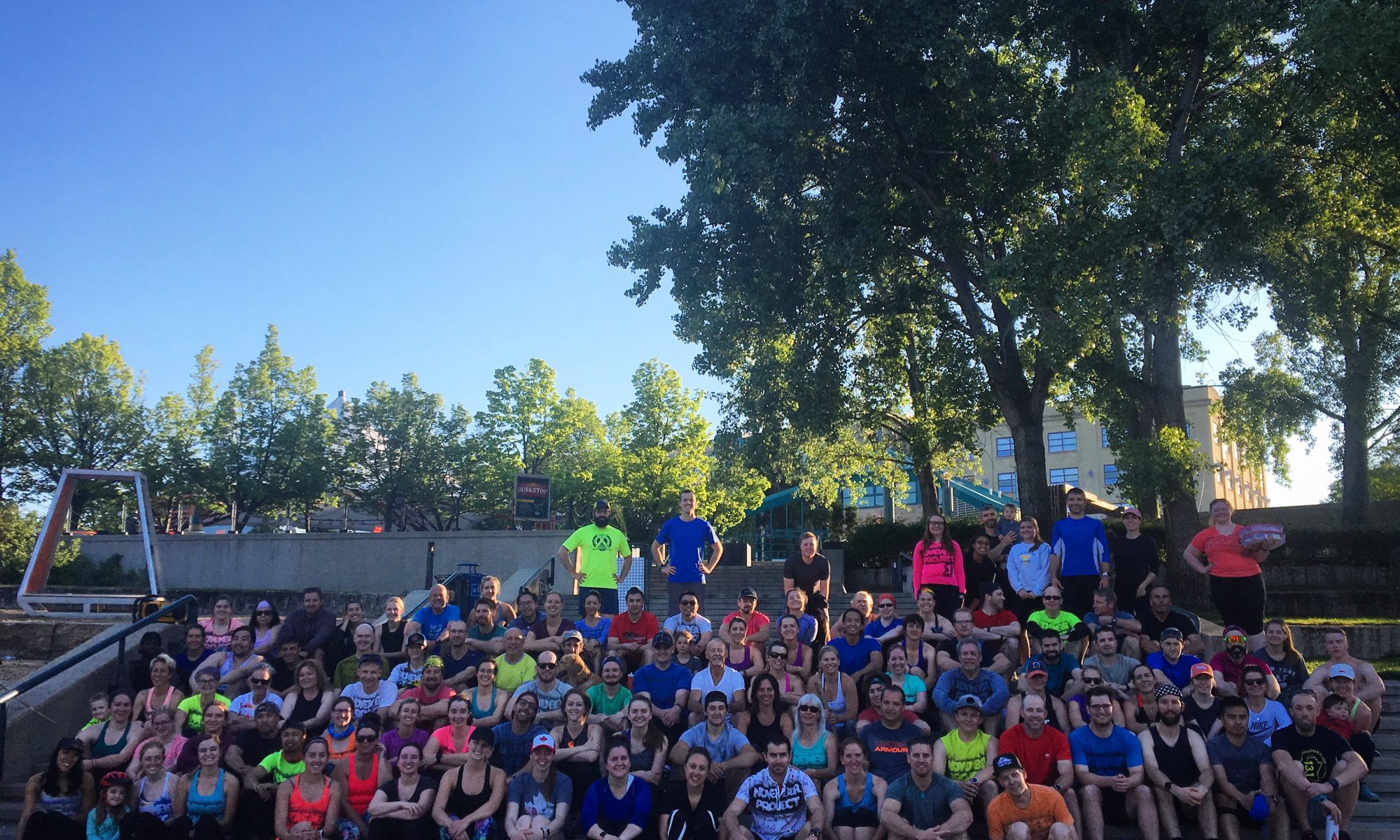 This morning was hard; hard physically, hard emotionally. Derek’s parting gift was an incredibly tough workout, we will all be SORE AS HELL FOR DAYS. And the city’s parting gift was a whole bunch of sweet, lovely, heart felt things: there were cinnamon buns from Yvette, cookies baked and decorated by Erin, a shirt signed by everyone and organized by Will, a wood NP Toba, designed by Steve, a video edited by Gen and heartfelt hugs and goodbye messages of various varieties from everyone else. Last week Will asked me the over under on the number of Pages at the workout and I confidently (and correctly) predicted all of them who were in town would be at the workout. Y’all showed up in big numbers today for Derek, and that is a testament to what he has helped create over the past 3.5 years.

It was the Manitoba marathon on Sunday, and there are a ton of people who I want to celebrate, so I will do a separate blog on Friday after Trash Stigma, so that no one gets short changed.

It is an honour and a pleasure to be a co-leader and I know that it is not a responsibility that Derek has taken lightly. Over the past 3.5 years Derek has given his all to this group, and if you know him at all, then you know that his all, is a whole hell of a lot. Three and a half years of mornings, every damn week, whether you want to get out of bed or not, weekly workout planning, extra event planning, relationship cultivation, picture taking, album posting, blog writing. Three and a half years of hugging and connecting, of leading from the front, and pushing others to join him, giving it their all. Three and half years of scheming and dreaming. The Great Skate started as a fly-by-the-seat-of- your-pants Sunrise 6K and has grown to what it is, almost single handedly because of Derek. He built and cultivated relationships, with the Forks, Prairie Summit, North Face Canada, professional photographers and videographers and all the other people who volunteer their time, resources and talents to help us pull off, what is now a truly epic event.

Derek holds himself and those around him to a higher standard. I know first hand, the effort that Derek pours into every part of his life, because I was his roommate for two and half years. Derek has poured his heart, soul, brains and brawns into this movement, this city and all of us over the last three and a half years. I know that from the outside, it can look like Derek leads a #blessed life and that goods things just come to him; he connects easily, he is a natural leader, he is super athletic, he has an incredible family and amazing friends. And although, all these things are true, I know that they did not come easily. Derek connects with people because he ask people questions and listens to and truly cares about their answers. He remembers what you shared with him and makes a point of following up. Derek is a great leader because it is a skill he has cultivated and developed, he reads books and listens to podcasts on the topic, he does an immense amount of self reflection, and he listens to and processes constructive criticism. He is very athletic because he puts hours and hours every week into running, skiing, yoga, and pumping iron. Derek has strong bonds with his family and friends because he prioritizes these connections and the time and care it takes build, grow and maintain these relationships. Everything he has, he has worked incredibly hard to build.

Through our time as roommates and co-leaders Derek has become one of my dearest friends. Derek has inspired me to be a better leader, to train harder, to be a better friend and to maybe vacuum (jk, I never vacuumed, a vacuum is not on the list of power tools that I know how to use). In our apartment, my other roommate and I called Derek, Papa D, because he took care of all of us. Make dinner for Derek once? He will make dinner for you three times. Have a bad week? You’ll come home to flowers on the kitchen table. You’re napping on the couch with a soul crushing hangover? Derek will cook greasy breakfast for you and leave it on the kitchen table. Through our friendship, I learned to value myself and my relationships more and because of him, I am a healthier person, with healthier relationships. Derek, I am glad that you are here.

The outpouring of gifts and thank-you’s from the city speak to what Derek has meant to all of you. On behalf of November Project Winnipeg, from the bottom of our hearts, thank you. I know that this type of attention makes Derek very uncomfortable, so even though I could say more, I will stop here. This isn’t good-bye, it’s just see ya later. I can’t wait for you to chirp me from the back of the group, “I wish you weren’t so f*cking awkward bud” next time I bungle a bounce. We’ll see you around.