This past Wednesday, Ana won the positivity award. She’s stood out over the last ~6 months as someone that has embraced EVERYTHING about November Project. You can follow her (and future positivity award winners) on Snapchat at @npdc_positivity. We asked her a few questions so you could get to know her better! 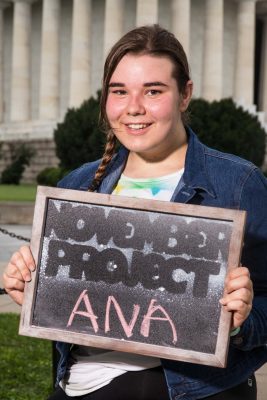 How were you introduced to November Project?

My introduction to November Project came via the instagram of one of my San Diego friends Joalby. I made the mistake of commenting on one of his NP photos something along the lines of “wow, this is something I would love to do once I get in shape.” I got sent this video in response. Later that month, I made the mistake of commenting something along the lines of “wow, plz keep posting about NP and maybe one day I’ll have the courage to show up.” That following Sunday night, I got tagged in a NPDC photo challenging me to go to Capitol HIll Monday the next morning.

I remember telling my four roommates the night before that they might need to collect my body on Capitol Hill. The workout was Indiana Jones sprints but I only made it halfway up the hill before I had to ditch my group and go solo. I don’t know what I was expecting, but you know you are in for a good time at NP when you nearly die just from the bounce.

That workout was defeating and very frustrating but as I was leaving to head home, Ron ran after me and said some variation of “the first one is the hardest. I really hope that you come back.” Had he not taken the time to do that, I think I would have dismissed NP as “not for me” and probably would not have come back.

What motivates you to keep you coming back?

Becoming stronger, faster, and a better, more authentic version of myself. I had accepted that exercise was just something I didn’t like and running was something I was just bad at. Now, that couldn’t be further from the truth. Every Monday and Wednesday I show up. Yes to workout, but also to prove to myself that the biggest obstacles we face are the ones we place in front of ourselves.

Next year, I’m going to be an RA at a GW freshman dorm and co-lead our club water polo team, and want to continue to get my friends, residents, and teammates out to NP. It can be a tough sell when most college mornings start at 11 AM but I’m optimistic. Showing up to NP has been a really awesome addition to my college experience.

What does winning the Positivity Award mean and represent to you?

I wasn’t expecting it at all all. It wasn’t until Steve talked about a newbie issuing a standing verbal that I realized “shit, that could be me.”

There is a certain level of vulnerability that I felt coming to November Project workouts.  For me, it was, and to some degree still is, really hard to show up and consistently do something that I’m not great at. Winning the Positivity Award just validates a lot of effort and makes me feel like a “real” part of this community.

What is one thing you want the Tribe to know about you?

I’m obsessed with coffee and work a second (or third depending on the time of year) job at Compass Coffee. Come say hi to me on weekends at 14th and I!

Fun fact: during the school year, I would go to the 5:25 workout, shower, change, go to work at Compass, and then go to class. I have a much easier schedule over the summer, and am really enjoying the freedom that working 9-5 allows. So much time for NP, yoga, swims, and sleep!

What’s your favorite sandwich and why?

Half tempted to say hot dog solely based on a passionate debate I witnessed in Wednesday’s burnout but avocado toast is just an open faced sandwich right? Toasted bread and avocado are the world’s most perfect foods.

What advice would you give to someone that is nervous about trying November Project for the first time?

Your nervousness is completely valid, but don’t internalize those emotions. Come out to a workout and try it for yourself. You can always take everything at your own pace, and modify as needed. I spent a lot of time being nervous about NP, but in retrospect those feelings seem so pointless. I was nervous about being judged. Nervous about it being too hard. Nervous about group workouts and holding others back. Nervous about long runs. In the first few months, I used these feelings as justifications for skipping. But when our fears or nerves get in the way of things we want to achieve, they no longer become feelings, they become limits. I have walked away from a November Project workouts exhausted, tired, sore, but have never once regretted going. As one of the younger and slower members of the tribe, I can vouch for it. ALL fitness levels. ALL ages. All you gotta do is just show up.

What is your most-used emoji?