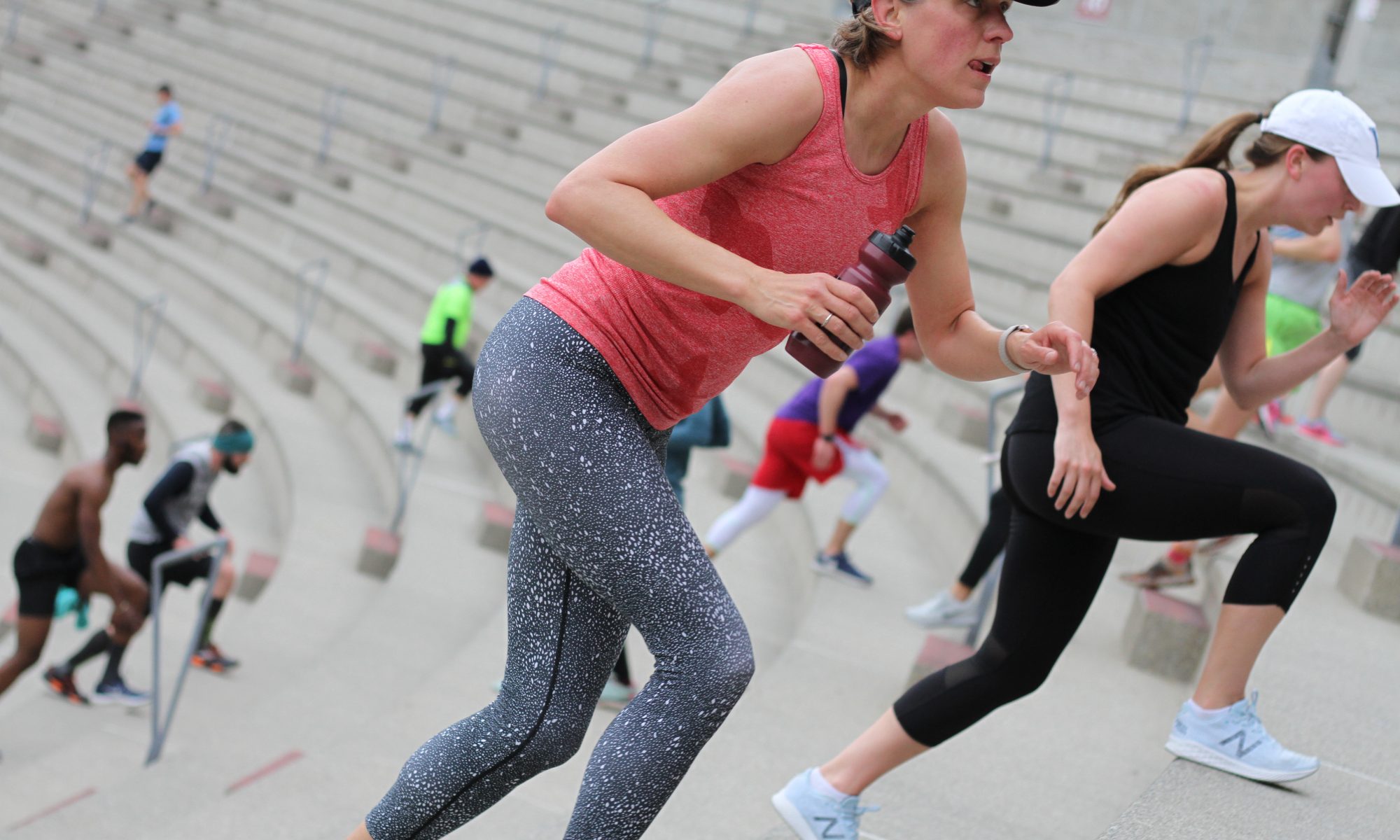 Today’s blog comes to you from a long-time member of the Boston NP community: Erika Anderson. She offers a pretty great perspective on the Stadium. From PR day, to stadium math, and why we keep coming back…there’s some wisdom in these words. Thanks for sharing it, Erika. We’re glad you and your whole family are such a strong part of NP_BOS

Even though I can run a marathon, I cannot “run” the stadium. I, who generally only like workouts that involve “running” (I’m looking at you, Fridays), have nonetheless been showing up at the stadium going on five years now. I say I am going to “run the stadium,” but really, it’s a slow-ish climb up the concrete seats and a fast-ish run down the small crimson stairs. Don’t be fooled by the reference to stairs, either. The stadium is not really a “stair workout,” unless you imagine the stair stepper at the gym with the setting, “masochist,” that not only allows you to make the steps come at you faster but also allows you to change the actual size of the stairs from normal one-steppers like you’re walking to the basement to gigantic lift-your-leg-and-make-your-thigh-parallel-to-the-ground steppers. And, by the way, now those stairs are concrete covered in concrete with a side of concrete.

Once, at a friend’s taunting (I’m looking at you, Harry Mattison), I tried “running” down the big seats. That experiment ended when it became clear I would either die from fall-induced head trauma or from the world’s first heart explosion. As I gasped out the words, “too – hard – gonna – die,” he calmly stated, “I said it was fast. Not free.” Never were truer words about Harvard stadium said: maybe you can find fast, but it won’t be free.

Regardless of how we describe it, there is no denying this non-running stadium ritual is strangely addictive. Like the siren song that smashed boats into rocks, the stadium similarly calls our bodies toward its concrete steps. (The pain may also make this metaphor apt). It calls those of us who show up even though we hate all exercise except running, and it calls those who show up because they will do any exercise except running. Here we both are, the runners and the haters – or the non-runners and the haters – most Wednesdays mornings hiking/climbing/running/walking, fill in the stadium Mad-Lib verb.

Every Wednesday, up and down, up and down, up and down we go. My watch’s exercise app traces my movements with a childish zig zag pattern. Once, on vacation with my then-20-month-old twins, a man at the beach told me he wished he had a map that traced my steps, chasing the twins all morning. “It would go this way, then back again, then that way, then around here, then cross over here. I’ll bet you’ve already walked ten miles and never left this small patch of beach.” He shook his head, smiling and looking at me with a mixture of awe and lady-you’re-crazy. That’s pretty much what the stadium, in Strava speak, looks like. Thirty-seven zig zags marks a “full tour,” the lingo we’ve adopted to describe this absurdity called stadium running. You don’t have to show up for long to learn the stadium has its own lexicon: frogman, robotman, double-burger, fire drills, and back to the future, to name a few.

Nor do you have to show up for long to learn the stadium has its own math. If you run from Section 37 to section 27, you’ve completed 11, not ten, sections. (Trust me – I just verified with the time-old tradition of counting on my fingers). If you want to run 40 sections, you repeat section 1 times 4. We say half a stadium is Section 19, but half a stadium is really half of section 19. I don’t like either math or statistics, yet I religiously track and document my weekly numbers. On the day our lingo dubbed “PR (or personal record) day,” I recorded 37 zig zags, 178 heart rate max, 30 minutes and seven seconds total time on the clock.

I scoffed at my husband’s “PR” stadium goals for months. What is a competition if it doesn’t involve a comparison to others? A podium or at least numbers next to names under a “results” tab? How do you measure up to all the other stadium runners when there are no actual stadium races? It’s not a 5K or a marathon that can be replicated pretty much anywhere; it’s a race concocted by (I’m looking at you, BG & Bojan) and limited to a small subset of people, in Boston, on a one-of-a-kind course. How do you even know if your time is any good when PR’s are documented only on an individual’s personal watch, and not on the Interweb? A photograph with a “PR chain” (or “PR Pig,” for my first PR) may announce a PR, but only generically. Why do we not only keep showing up but also keep trying to go faster or farther, trying to best our last best stadium-“running” version of ourselves?

It took many weeks of “running” the stadium for me to realize the answer lies in the question. My PR is important because besting myself matters to me. How I compare to you or the fact that there is no comparison is exactly the point. It’s why it’s called a personal best not a comparative best. It’s personal. I get to be competitive in the purest sense of the word: to make myself better for the sake of making myself better. Not better than you or some runner across the country or a recorded Strava time. I will give this contrived competition my all because I know how to measure my all. It is exactly right, therefore, that you, dear reader, cannot tell at first blush whether my 30 minutes and 7 seconds for a so-called “full tour” is good or bad or mediocre. Hell, you only just learned what a full tour was a couple of paragraphs ago.

What matters is that I know what it means. I know that on PR day, I gave what I had after a long winter, plantar fasciitis hiatus. I know I was some four minutes off my PR but some two minutes faster than last month. I know that at section 19, I smiled because I was (by stadium math) halfway done. I know how frustrating that seemingly endless curve marking the “teen” sections is. I know the grit that takes root in section 9 – into the single digits! I know the hope that arises when I’m in those last 5 sections – the end zone, to use the words of an NP OG (I’m looking at you, Nick Stamas). I know how I try to actually “run” Section 1 or 2/3 of Section 1 or at least half of section 1, even when my shaking legs and exploding lungs tell me I have no business doing anything but using those seats for their God-intended purpose: sitting. I know the the uplift of cheers from complete strangers at the top of Section 1 who, in that moment, are the most important people in the world. I know the satisfaction of stopping my watch, my legs quaking and lungs heaving as I grab my knees, silently chanting the mantra, you’re not going to puke, you’re not going to puke. You’re. Not. Going. To. Puke.

I know the view from behind Section 1, where I stand when I can stand again. I know the winter sun rise, the blaze spreading across the sky like wild fire, or the summer sun and its Midas touch making the world gold and the river diamonds. This view never stops being the sweetest site because it signifies, I am done, I am still alive, and damn, is this city beautiful even when – perhaps especially when – I’ve just emerged from the concrete belly of the stadium, like Jonah being spit out of the whale.

When you run this stadium ritual week after week, you realize running isn’t necessarily measured by cadence or splits. Running may not even be running. You learn the best route from here to there isn’t necessarily a straight line but one that zigs and zags. You find the best way to feel completely alive is to wear yourself completely out. You discover the best understanding isn’t what you think but how you turn and go, turn and go, turn and go until your hand slaps the number 1 and you know, you finally reached the end. Or perhaps, you’ve just reached a beginning – one that you can better, next month.

The new “thing” is the #ImGladYouWereThere. Show up to workouts, enjoy the humans around you–even meet new ones you didn’t know before today’s workout, then shout them out, either in person or on social media, by letting them know you are glad they were there. This kind of accountability and noticing each other only serves to better the entire community of us, by making showing up really matter to all of us. Show up. Use it. Keep changing the world, and growing this community.

Friday workout is at the top of Summit Ave (Corey Hill Outlook Park) at 6:29am. Get yourself there and bring a friend!

Monday workout on May 6th is at the Whole Foods near Symphony. 6:29am. We dare you to get there by running/jogging/walking/movement of your favorite kind, or show up early and do that movement around the area before and/or after the workout we do together.

Memorial Day Monday will still be on May 27th and it will still be a pretty epic & fun morning–that will not be like the “usual” monday workouts. So stay tuned for more details, and definitely make plans to be there.

NP Summit is a giant gathering of NP folks from around the world who #JustShowUp to gather together, do some workouts, run some races, have a whole lot of fun, meet new friends, see old friends, and keep building this cool movement that is November Project. NP Summit 7.0 will be held this year in Las Vegas, Nevada, November 15-18 at The Rock’n’Roll Las Vegas. The races on Saturday (5K) and Sunday (10K, 13.1M, 26.2M) actually shut down the iconic “Strip” and don’t start until the sun sets. There is much more to come, but for now, save the dates…think about going to Summit…and start making plans to join the fun. There will be a workout on Saturday morning and all NP events will conclude on Sunday night. We will be sharing NP-specific registration codes soon so keep an eye out for those!