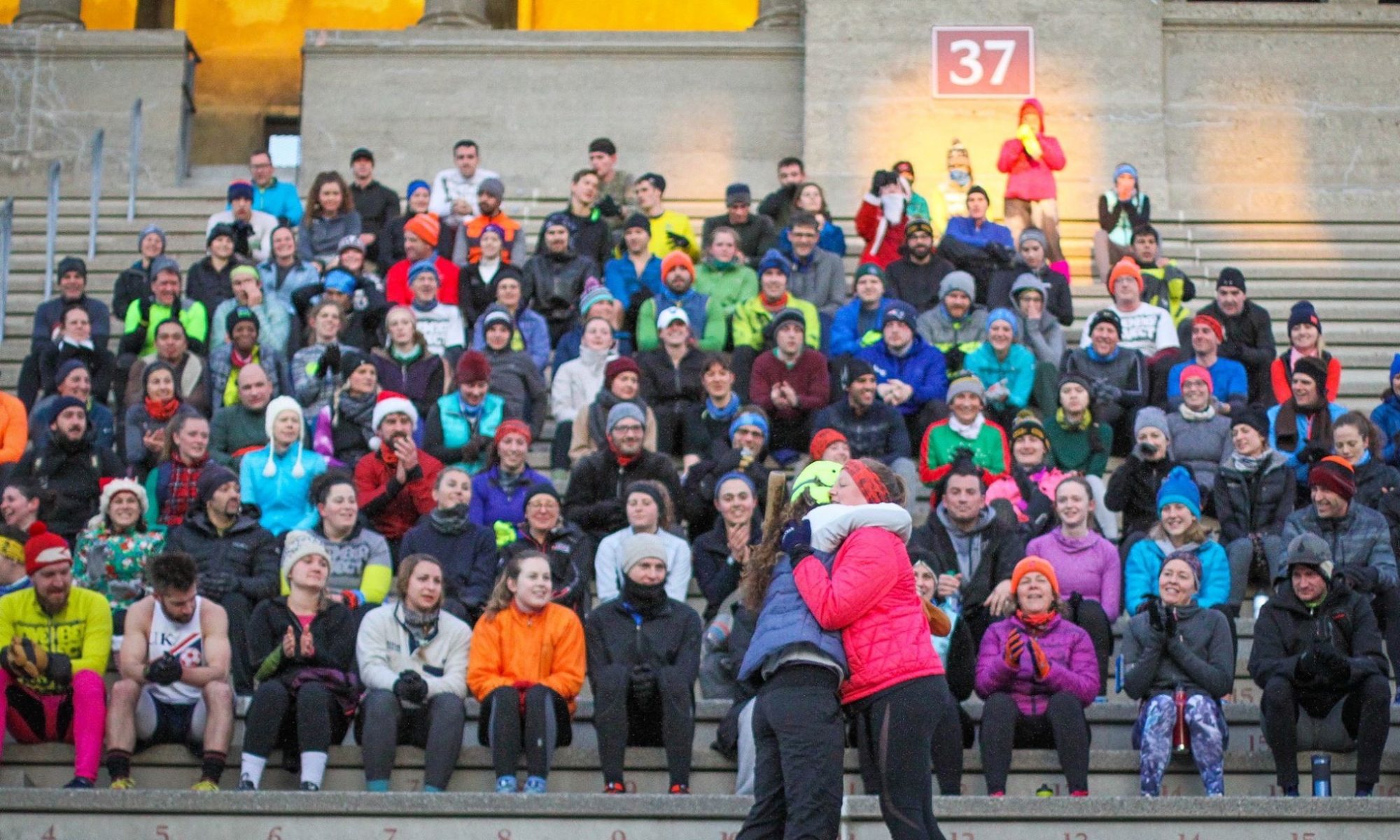 You know the Positivity Award? The old rowing oar handle that BG and Bojan started giving out a million years ago to symbolize the significance of each and every human being being valuable and important as a member of the community/team/boat. We give it out to members of the NP_BOS community who we want to recognize, celebrate, and say thanks for being awesome. It’s a nice opportunity to also make people a little more visible within the bigger crowd, for more people to get to know, in case they are one of the folks you just haven’t met yet.

Many of you might not know that we traditionally don’t give out the Positivity Award to the same person more than once, not because they stop being awesome or deserving a little recognition, but because we want to keep spreading the positivity around and celebrating more and more of the community over time.

And maybe this time of year brings out the best in Brooke…maybe she shines a little brighter as winter comes on…maybe she’s just awesome and that shows most right about now. Because this morning, the co-leadership of Boston tried to give Brooke the Positivity Award. AGAIN.

We have given out the PA to literally hundreds of people over the years, and one might think that we are able to keep track of exactly who has received it, so as to keep giving it to new recipients. But this morning, at the hills of Summit Ave. we were convinced (by asking ourselves) that we have never given the PA to Brooke, and it’s long overdue. She was at the workout this morning, crushing hills like she very regularly does, and it just seemed like the right day to throw the PA Brooke’s way.

We made two critical errors, however, which resulted in probably the best, funniest Positivity Award announcement I’ve ever given.

She’s not much of an IG poster, since her last TWO posts are from December of 2018, when she received the Positivy Award. But there it is, one IG search away from facts.

Second error, and this is hilarious, we knew Brooke was at the workout at the start, but when we rounded up for the group photo after the workout ended, we typically just double check to know where that human is in the crowd–to be sure they are there! And after giving what was a genuine, heartfelt, and really true statement of why Brooke was receiving the Positivity Award TODAY, everyone did that thing that crowds do when someone is getting called up and you look right and left, front and back, searching the crowd to lay eyes on that person and see their reaction as they make their way to the front. Everyone did that thing. And then Renee kind of whispers to me — you know, she put her hand up to her mouth like she was whispering in my ear but had to shout-whisper so I could hear her from the group — “BROOKE HAD TO LEAVE, SHE’S NOT HERE!”

Of course Brooke wasn’t there at the end of the workout to get the Positivity Award. HAHAHAHAHAHAHAHA.

But that wasn’t the end of the hilarity. I immediately realize the rookie-style co-leader mistake we’ve made by not checking on Brooke’s attendance at the group photo and I think, “geez, at least Laura McCloskey Green isn’t here since she would give me shit about this until the day I die…” because Laura most often doesn’t stay for the group photo, due to getting back home to her kid on Friday mornings. And I was smart enough to say that thought out loud…

at which point the entire group does the look right, look left, look forward, look back thing looking for Laura Green and her head pops out of the crowd, announcing, “I’m still here!”

“AND THE POSITIVITY AWARD TODAY GOES TO LAURA MCCLOSKEY GREEN!!!!!”

And that was the funniest thing that has happened to me in a very long time….

UNTIL after we took the photo, and Renee approached me to now very privately whisper that Brooke had already received the PA…like last year…and we should probably know that too. It was like the most perfect shit show of Positivity Award goodness there ever was.

So I would like to use this blog to publicly recognize both of our PA recipients this morning. Brooke, you ARE great. You’re a super dedicated part of the NP community and we are so glad you’re here. Thank you for working so hard to get back from injury so that you could challenge yourself to hit new PRs and keep inspiring others to push through hard times too. Thanks for showing up even when work is crazy and you have to leave early to get there, but not using that as a reason for you to not get everything you can from running hills with NP_BOS on Fridays. Thanks for being you.

And Laura McCloskey Green, you had better believe that getting the PA twice is in your future too. You loved the ridiculousness of taking it as a consolation prize and I look forward to all the shit you will give me about it until I die. And there isn’t anyone more deserving of the recognition of the Positivity Award than you. I’m Emily Saul, and I refuse to let it just be a funny moment, I’m gonna take it a little deeper to tell you, and everyone else reading this blog that you bring so much more to NP than anyone will ever realize. You care about people so much that it hurts sometimes, and that love is something I admire again and again. You crave for NP to be fun, and always funny, and hard, and connecting and empowering. You have a vision of NP where it can mean everything and at the exact same time no one takes anything too seriously at all. Which is a balance I wonder if others are striving for enough–and precisely the reason I think more people should know you and all you bring to NP. Most days we should all be a little more like Laura. Give a shit about the right things, and stop giving a shit about the other stuff. People matter, take care of them. And work really hard because being someone who relentlessly strives to find your own best is a great way to live life. Thanks for being you, and we are really glad you’re here, at NP, and in Boston.

Thanks for having so much fun this morning, friends. Let’s do it again next Friday, and Monday and Wednesday too. See you there.

Hey friends, we’ve done a lot in the last couple of years to make NP feel a little safer–specifically in regard to how we connect with each other physically. NP used to be the place where you get hugs…for sure. No matter what, we hug, because that’s what we do. And there was a reason for that, and it’s a part of the culture of NP. We connect, even when the world around us seems to be trying to disconnect us from a sense of community, neighborhood, family, and genuine feeling of having a group of your people. We’ve been explicit about making that physical connection be YOUR CHOICE, about if and how you do that. We no longer simply tell everyone to give out bear hugs, no matter what. We give options of high-fives or hugs, and truly hope & believe that the shift helps anyone who doesn’t want a hug to feel like that choice is respected and seen–equally valued in this community. And if neither of these is desired, that we’re also making the vibe of NP represent one where you know it’s okay to say, “no thanks” and for that to be respected. We all deserve that right with our bodies and our social connections.

We also need to remind everyone that the choice of if or how you physically connect with people extends beyond the bounce and the “hugs or high-fives” portion of the start. During workouts it is also necessary to respect the physical space of others, and if you want to make contact with people, even when it’s to be encouraging and supportive, that you do so in a way that gives others the choice to engage in that physical contact.

FOR EXAMPLE, when you’re running down the hill on Fridays, and you are passing someone–DO pass and say something encouraging. DO offer a hand out for a high-five, which can be received by that person. DO think good thoughts and/or send them encouragement with your mind/heart.

Please DO NOT make contact with them from behind, which does not give them choice about whether they do or don’t make that contact. DO NOT take it personally if you extend a hand for a high-five and they don’t return it–they might not hear you, see you, they might be in a pain cave and don’t even realize what you’re doing, or they just might not want to connect physically. That is their choice, and you can still be just as supportive and encouraging. No judgement there at all.

We have incredible people showing up to NP and it absolutely is our goal to be inclusive of everyone who wants to be here. Those who want a million hugs and those who don’t…even if hugging is “normal” at NP. It’s also normal to not want hugs. It’s normal to enjoy a group and want to talk a lot as well as to be quiet. It’s normal to do fitness and love it and to kinda tolerate it, even if we all are doing it. This is simply a request to be more aware that everyone gets to have their own experience at NP–by their own choice. Please respect and celebrate that by DOing the things that elevate everyone’s experience.

Show up for the workout on Monday at the park in the Fenway area, near the Landmark center/new Trillium spot. MAP HERE!

Today. Get your buffs ordered. Do it NOW. RIGHT HERE.

Wednesday 11/27 is the Last Wed of the Month–so #PRday is coming. And we will likely be tagging Grassroots Gear, temperature depending…so stay tuned!

Friday 11/29 is the day after Thanksgiving and we’ll DEFINITELY be having a workout. Since both Capozzi and I will be out of town, we’re having the entire Klawiter-Anderson clan lead the workout–and then they’re hosting a post-NP brunch at their house down the street. You don’t want to miss this, if you’re in town. #JustShowUp #FunYeah