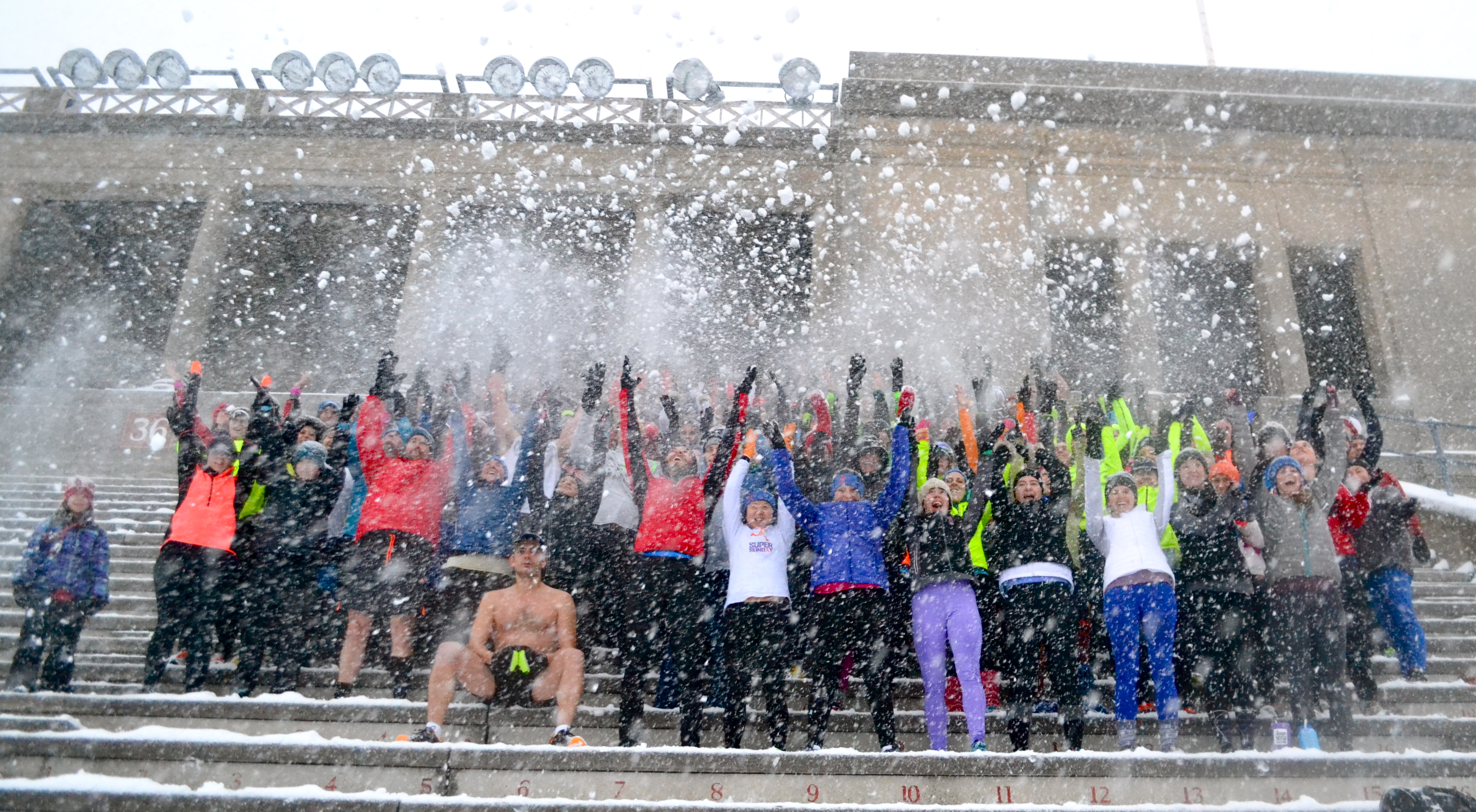 So it snowed. A lot. All over the stairs and seats. But that didn’t stop us from doing the workout. Are we insane? Weeeeelllll, those shirtless boys sure are dropping our chances of arguing against the affirmative answer. Are we reckless? Absolutely not! On days like today safety is our number one priority. Number two is having fun. Everyone did a very good job on staying safe. Everyone had a lot of fun. Today was a great day!

Giant thanks to our friend Andrew that attempted to tackle the Sisyphean task of shoveling stairs. Relentless snow made the stairs look like Andrew wasn’t even there. But we saw him, and we acknowledged his effort by giving him the Helping Hand Award!

For those of you who have to go to work/school/meeting/event today, be safe out there. For all of you that don’t, happy snow day! We’ll see you all on Friday in the hills of Brookline.

Last week the local paper published an article, “Indy Not as Brave as Other Cities”. It compared and contrasted Indy’s recent snowmageddon and closure of the city—that’s right, the city of Indianapolis shut down, twice; to that of nearby cities. Some are braver than others. Two weeks ago, -14, and the tribe is strong. Last week -10, again the tribe is strong. This week a balmy 7 degrees, but 7.4 inches of snow overnight, with unplowed roads leave this fearless leader literally stuck in the snow. I would have ditched the car and ran to our location, but said vehicle was smack dab in the middle of an intersection. Indy is a large metro area, with poor snow patrol which further illustrates the need for mass transit. Dear Mayor, People need to workout with NP. People need hugs. Please plow the roads. And fund mass transit, that is all. Tribe, you know what your Indy NP Remote Workout Version 1.0 is today. Let’s hope we never have to remote workout again. #missedthetribetoday.

Mother Nature keeps turning it up… and we keep bringing the noise!

Today was one of the warmest Wednesday workouts we’ve had during our tenure as an NP tribe; a balmy 33 degrees! It was also one of the worst freak weather situations, most us had to jump, ice skate and/or swim through freezing rain, downed trees and flooding to get to the Art Museum this morning. With all the ice, the steps were not an option… Mom Nature thinks she’s funny, see.

These hardcore folks (including 2 newbies) did sprint work, push ups, wall sits, lunges, squat jumps, etc. We played “something you don’t know about your neighbor” and learned fun facts about each other, like one of our tribesmen found us because he ran hills with NPSF and Clayton gave him the PHL 411 – proving yet again that world takeover is imminent and the tribe is super fucking strong!
We hugged a ton, took some photos and ran back off into the freezing rain to start our days.

I almost don’t blame the missing tribe members this morning. Patches and I practically skated to the workout and my poor 1999 Buick Lesabre drove over a fallen lamppost( #offroading). Somewhere during the course of the night the sky had decided to chunder ice, keeping a number of our brethren safely tucked in their beds. We ALMOST don’t blame you…

It was hairy out there this morning, sure, but the faithful got their work in. We ran, squatted, burped, planked and generally rolled around in the 3 inches of water sitting at our feet. This morning was kind of like a polar bear plunge but arguably more hardcore.

Other highlights include:
-Our rogue stencil artist Giovanni who made himself a badass crab stencil which he proudly rocked to this morning’s workout.
– Finding out that both Travis and Steve have twins (twin hoistie workout anyone?)
– Allison being smarter than us all and wearing ski mittens.
– Frank’s beard….again

The tribe is strong, a little wet, but very, very strong.