WE KNOW, WE KNOW. WE SHOULD HAVE USED WHIPPED CREAM THIS MORNING!

**warning! long post…scroll down for the Wisconsin notes..! 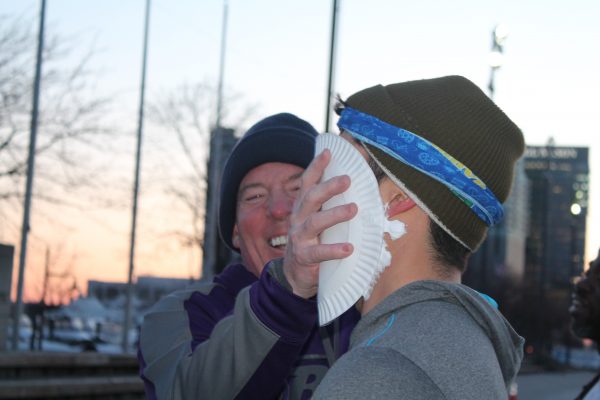 Wow, the small things that might make a if difference in a workout really escaped us yesterday when we were using our co-leader artistic license to create a PIE experience after our PI DAY workout submitted by the epic collab of Bill Logan and Lizzie Harkins. Last year we couldn’t do the full work out because it was 10 degrees and the stairs and lap were completely iced over. So this year we felt it was necessary to bring back PI DAY on 3/14 because it is Bill’s birthday and Bill loves numbers it all seemed way to perfect of an opportunity to pass up.

SO we crushed the workout and the bear crawls and then we gave you the opportunity to shove shaving cream in our faces…”WAIT, WHAT??” you ask, genuinely confused why we would chose to do such silly things before the sun rises. Well you see and most of you probably already know that this is exactly the flair of November project that must never get lost. We concluded the workout with a relay where the baton passed between teammates was a PIE (AKA a plate with shaving cream on it) and the team had to safely get the PIE to a cone and back while only holding on with one hand. This led to hilarity and also some lost shaving cream. The final person in the first three teams was granted the opportunity to put the PIE in the face of one of the co-leaders. While that was the instruction…I’m 99% sure every team got the opportunity to PIE one of us judging by the amount of shaving cream the landed on our faces. It’s telling to note that the first not one, not two but THREE, the first THREE pies went into the face of Nicholas Rodricks. I guess that’s what you get when you’ve been in charge for four + years. Congrats! We appreciate you, Nick, I promise!

This shaving cream choice led to WAY TOO MANY questions about why we chose shaving cream. Truth be told, we aren’t 100% sure. It was the first plan we thought of to get weird and was unanimously approved plus something about the Orioles using shaving cream in their pies…also who would want to waste pie or whipped cream for that matter, seems unnatural. But I did have an “ah hah” moment as soon as the first PIE was smashed in my face…”wait a minute, WHY did we not think of using something edible?” and that was the theme of the morning. 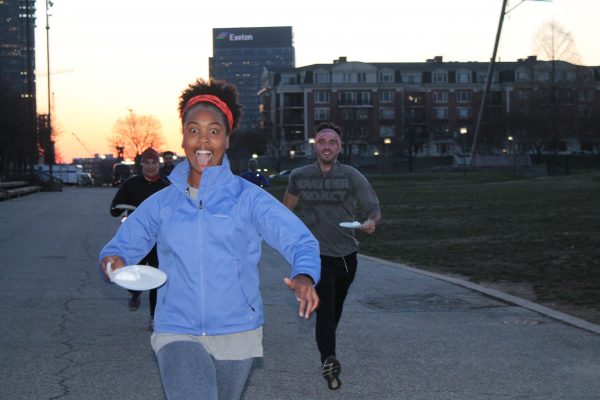 Quite possibly the most silly part the questionable decision making of this is that WAY WAY back in another life of mine I worked at a summer camp, shout out to YMCA Camp Woodstock in good ol’ CT. When I worked there we had a tradition of waking up other staff members up by putting cake in their face. Pretty sure none of this would fly at this point in 2018 but it was pretty much the most fun way to spend the hours of 2AM-3AM when the majority of our time was making sure the rug rats at camp were getting to the right activities on time or sneaking out of their bunks. This goofy, easy and simple old fashioned fun is exactly what I love about the people who seem to be attracted to November Project. The “yes” folks who are willing to step out of their comfort zones!

*Seems important to note, I am definitely not endorsing this activity now in “adult” life, which is why we volunteered ourselves for the PIE-ing.* However, it does make me wonder why I couldn’t take two more steps in my line of thinking to realize maybe just maybe we wouldn’t want a mouth and nose full of shaving cream…alas, we had a hilariously absurd morning and I just want to THANK all of the humans who came out and had fun with us this morning. If I know one thing for sure, I know that if you’re willing to get up a little earlier, come out and connect with other people at our workouts, engage in the little things that make us smile the tough parts of life will get a little easier, and you will probably be a happier human. SO GO NOW SPREAD THE NP VIBES and tell a few people about this crazy group of yahoos you run around with in the early hours of the AM. 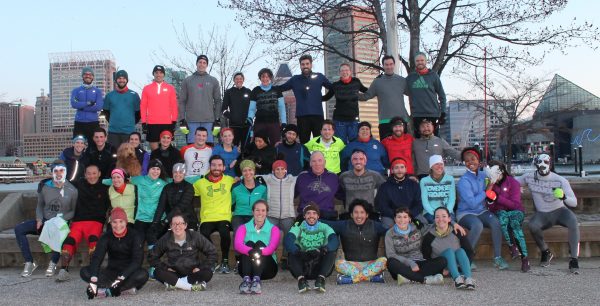