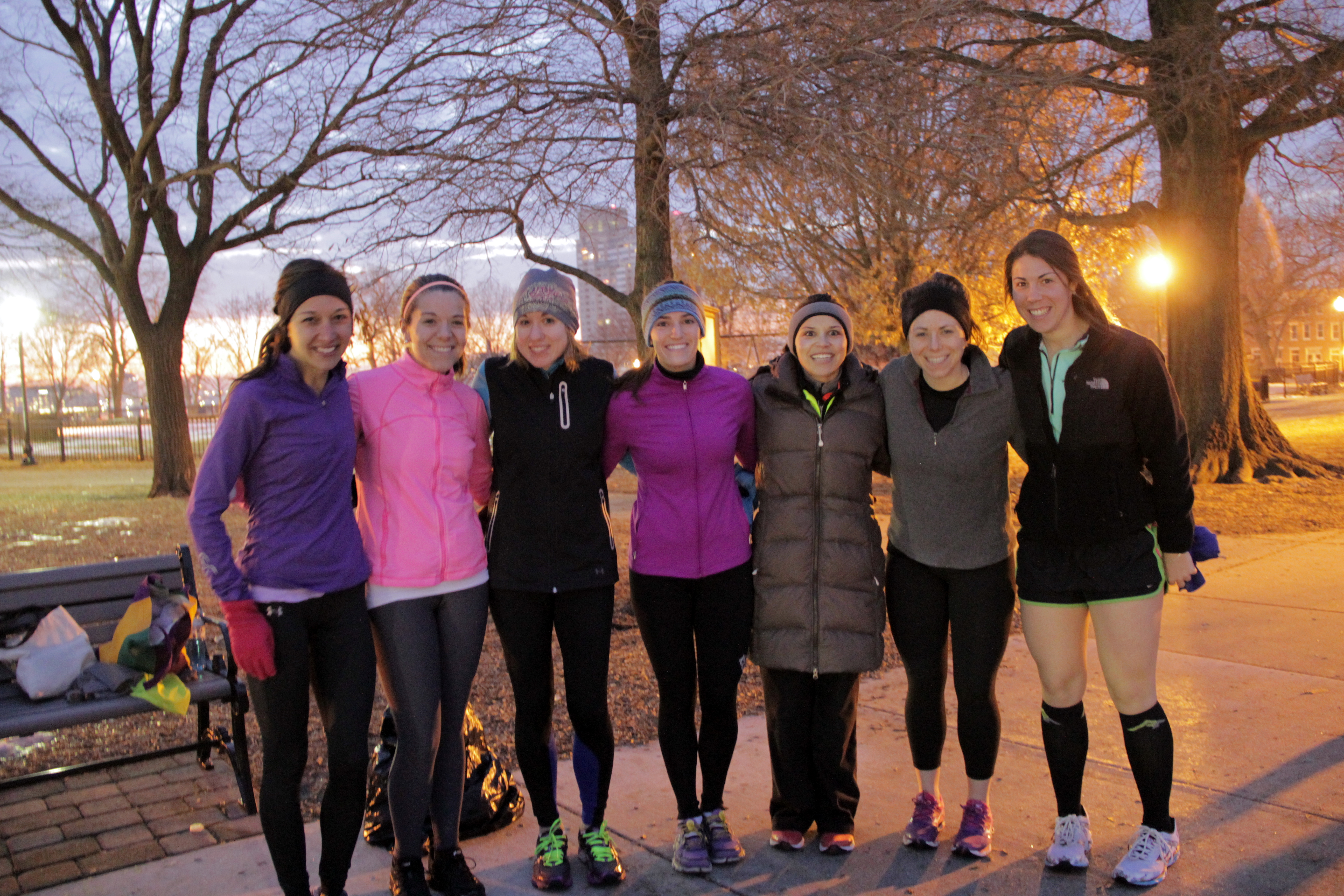 Sarah Pardus, we will miss you.

Sarah came to us in the earliest days of November Project Baltimore. She arrived quietly, maybe a little tentative to hug all of these new, sweaty, tight clad folks. We’re a lot, we’re loud, we’re obnoxious and we understand that but Sarah kept coming back, every week, without fail (a flat tire doesn’t count as a fail…at least not on her part).  And now, when Sarah leaves in a few weeks, it’s going to be hard to imagine the tribe without her. Who else will be at Friday Night Tight Club pushing us to run a couple extra miles instead of giving in to tacos and beer? Sarah, you’re Bmore through and through. Rock that crab with pride girl. Take it away…

I originally saw November Project creeping up on my Twitter feed from some people I know in Boston. Then it showed up in Runners World. Next thing I know, I’m getting tweets from people telling me that a tribe was starting in Baltimore and that I just had to go when I returned from winter break. I felt like it was haunting me. I wasn’t even sure I wanted to go. I was positive it wasn’t something I was going to enjoy. I didn’t know what it was, but I had it in my head that my endurance running self wouldn’t like the workouts.

I was wrong. SO very wrong. Showing up at 6:30am on January 29th was one of the best decisions I’ve made since coming to Baltimore four years ago. I remember running up the stairs in the pitch black as I arrived with a group of random strangers cheering for me. I thought it was kind of odd, and even odder that they all started hugging me. I should probably mention that I’m not a hugger. At all. My friends are constantly making fun of me for my lack of human contact. At November Project, I had a choice: either learn to enjoy hugs, or look like the jerk that doesn’t want to make new friends.

Needless to say, I started to enjoy being greeted by my fellow tribe members with hugs at the crack of dawn. It made the 5:45AM alarm and the 20 minute drive bearable. I actually began looking forward to Wednesdays, even counting down the days until the next one. There’s something that kept me coming back for more each week, and it certainly wasn’t the workouts. As someone who has been an athlete for my entire life, I couldn’t imagine getting a “good” workout in with just 30 minutes. Wrong again. Never underestimate the power of burpees.

All of a sudden I was being tagged in tons of pictures every week on Facebook that started a string of questions from my coworkers and my friends at school. What is November Project? Why is it called November Project? When is it? Where is it? Why do you get up so early to work out? My answer to every single question: #JustShowUp.

It wasn’t until I started spending time with my newfound November Project friends outside of the Wednesday morning workouts that I realized how great it was. Suddenly we were going to Tight Club at Lululemon on Friday nights, running races on Saturday mornings, and meeting at a bar on a Sunday night instead of writing lab reports so I can graduate. I finally found a group of people who are just as crazy as I am- they love to run, they love to talk about running, and they don’t mind getting up at the crack of dawn to exercise. They are the friendliest people I’ve ever met; everyone has a story to tell or advice to give. I started looking forward to spending time with these people I barely know, or in some cases have never met before in my life.

Almost three months later, I’m still attending November Project every week. I’ve only missed it three times since my first week: the first time the roads were too icy to drive downtown, the second I was home for spring break, and the third I got a flat tire at midnight the night before. I seriously contemplated taking a taxi the third time but I doubted my parents would warrant the large credit card bill an “emergency.” I’ve grown to love the tribe. It’s truly a family. It is one of the few things that I will miss about Baltimore (tied only with the running store I work at) when I move home in about a month, and I know I’ll be back to visit. The best part about moving to Boston is that I know I’ll have another November Project family ready for me with open arms. Literally.