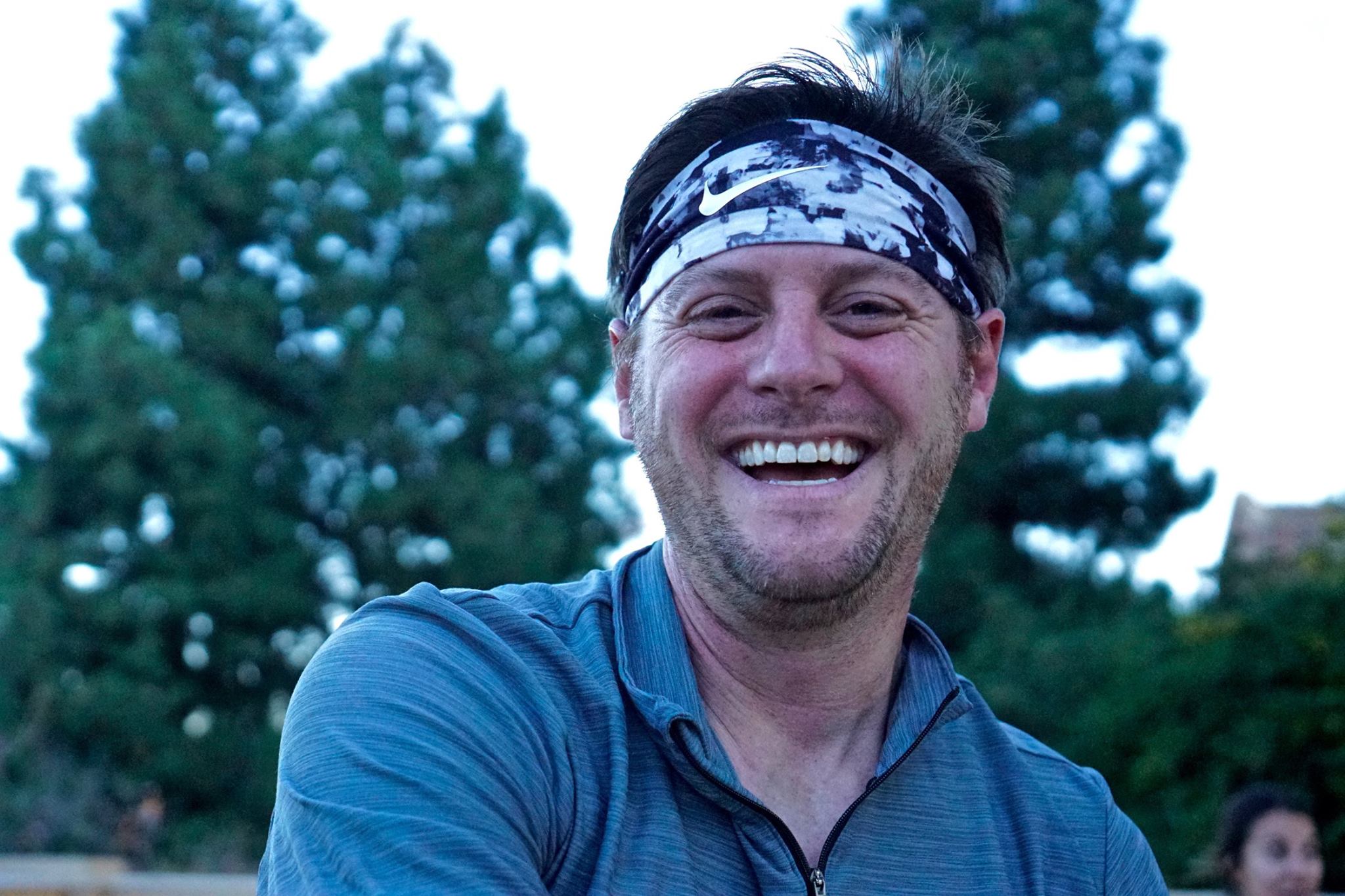 Benj Benj Benj! Where do I begin with the lovely Benj! Benj was an early veteran of our Westside Wednesdays crew, just a week shy of being with us on our first day. Benj is one of those super-humans you meet and instantly feel warm and comfortable around as he takes the time to make each person he talks to feel special in the most loving way. Every-time I see this guy walk into the stadium on a Wednesday morning I feel like Peter from Homeward Bound when he reunites with his dog, Shadow (more on that below). This community wouldn’t be the same without this wonderful, smiley, hard working human around. Take it away, Benj!

One year ago I walked on to the track at Drake Stadium on the UCLA campus for, what I didn’t know at the time, would be my first November Project workout. Back then NPWestLA was known as Westside Wednesdays. It was their second workout. Since NPWestLA wasn’t yet a tribe it would be a few weeks till I found out what November Project actually was. I was coming in to the workout blind and I have to admit that first workout was a little strange without knowing what to expect. The group was welcoming and encouraging for sure, but I wondered if I really needed a new group in my life. I’d worked out for years and always been pretty disciplined. I have participated in workout teams before but I didn’t love the pressures I felt on them often opting to train alone. Yet here I was early in the morning on the track giving hugs to complete strangers. What did I just agree to? I felt like sneaking away during that first workout and pretending it never happened. Luckily I didn’t. Now one year later, I hardly miss a Wednesday at 6:30AM. So, how did I end up on the track that morning? It was Kevin Netzly’ fault. 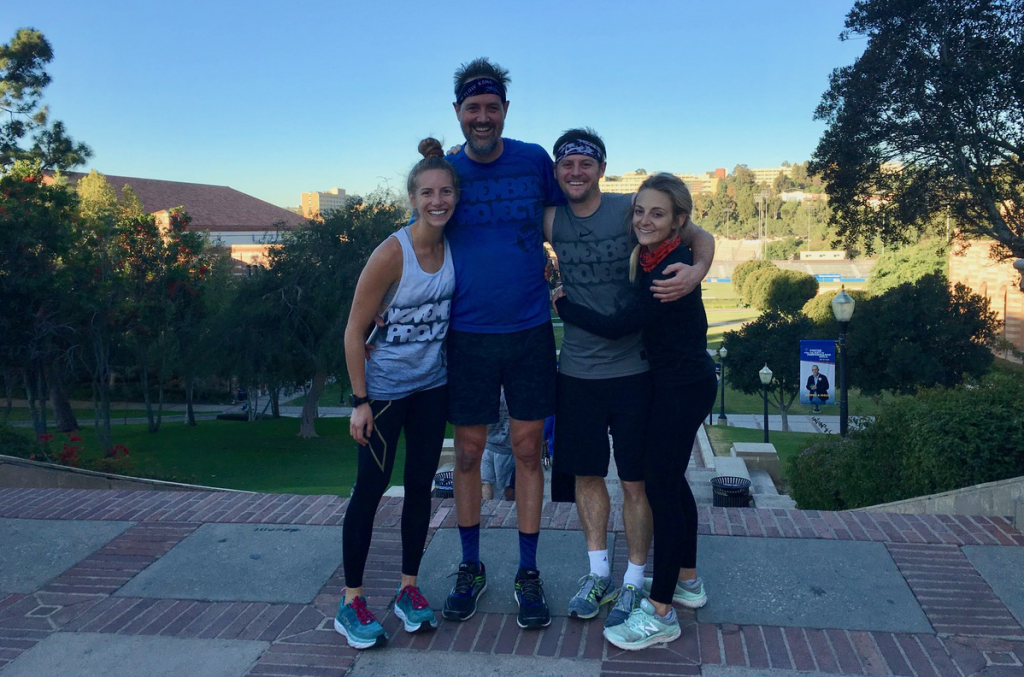 One week before that workout I had signed up for my first Marathon, the 2018 Los Angeles Marathon and already the nerves had pitched their tent’s in my gut. I had done a lot of running over the years but never further than 6 miles in one workout. My knees didn’t hold up well after a few miles so I had been running barefoot in vibrams for years. Those are those funny little toe shoes. They helped my knees and fixed my gate, but for the marathon I knew I needed more padding for the miles ahead. I was looking for a minimal running shoe when I met Kevin Netzly at Frontrunners. Kevin fit me in my perfect minimalist shoe. We had a nice conversation about the marathon during which Kevin mentioned his friend had just begun leading a group stair workout on Wednesdays. I showed some interest as it could help strengthen my knees, so he wrote down a URL for the workout. It was free. No catch. I was suspicious and put the paper put it in my back pocket to be polite. My goal at the time was the marathon and everything else was a distraction. As Wednesday approached my curiosity got to me. I thought what the hell. One workout wouldn’t going to kill me.

The alarm went off at five thirty that first day. I groggily left the house. Luckily for me, Drake Stadium is about a three mile drive and there was free parking. Bonus. Still, as a USC grad, I did feel like an imposter of sorts wandering around the rival campus before the sun was up. There were several groups working out on the track so it wasn’t until I saw Kevin’s six foot plus frame that I knew I was in the right place. He introduced me to Maggie and Tara who lead the workout. We began with a little bounce and then the new people were asked to introduce ourselves. Everyone said hello back in unison like I was in a support group meeting. Weird I thought. Then we were asked to turn around and hug someone and tell them you were happy they were here. Now, I’m not shy person at all. But, I have to admit at that moment I wanted to run the hell out of there. What did I just show up for? I was here to run a stair workout, not to participate in a share circle. Next, they set a course. We’d be doing stairs as well as additional exercises in a circuit. And then Maggie said go! Correction, she screamed GO! 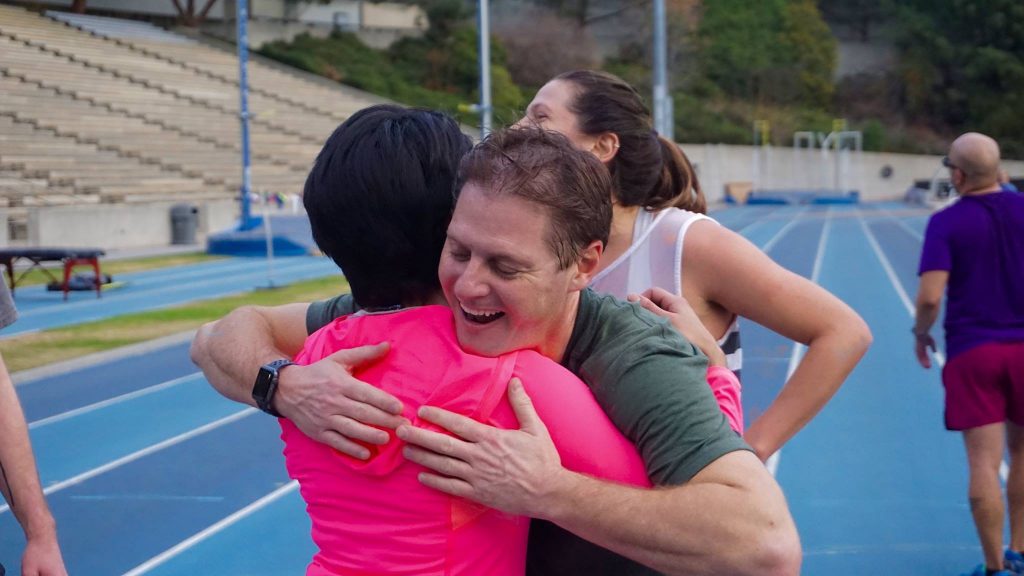 As I ran up that first set of stairs I quickly dropped any pretense I had that this would be an easy workout. I wasn’t as strong as I thought I was. But I didn’t feel as bad as I might have had I worked out alone. All around me were others at different levels of fitness but no one was in competition. Everyone was encouraging each other. No one more than Tara and Maggie who ran around the group with such energy you would have thought they were on happy pills. By the time the thirty minute workout was over I was beat. Exhausted, but in a good way. My knees felt strong and it seemed like this type of cross training could be helpful to my marathon plan. As long a I could survive the hugs at the beginning of the workout I would be fine. I spoke with Kevin after the workout again looking for the catch. But there wasn’t one. He just told me workouts begin on Wednesdays at 6:30 am. Just show up.

A little on Maggie and Tara. I’ve been around a lot of workout leaders over the years and taken a lot of workout classes. There are no two other leaders around with the energy, enthusiasm and love for everyone as these two. Their welcoming attitude had me eager to try it again the following week. It was like retuning to summer camp on Wednesday mornings. If all I had to do was survive the hugs, I thought maybe I could handle it. 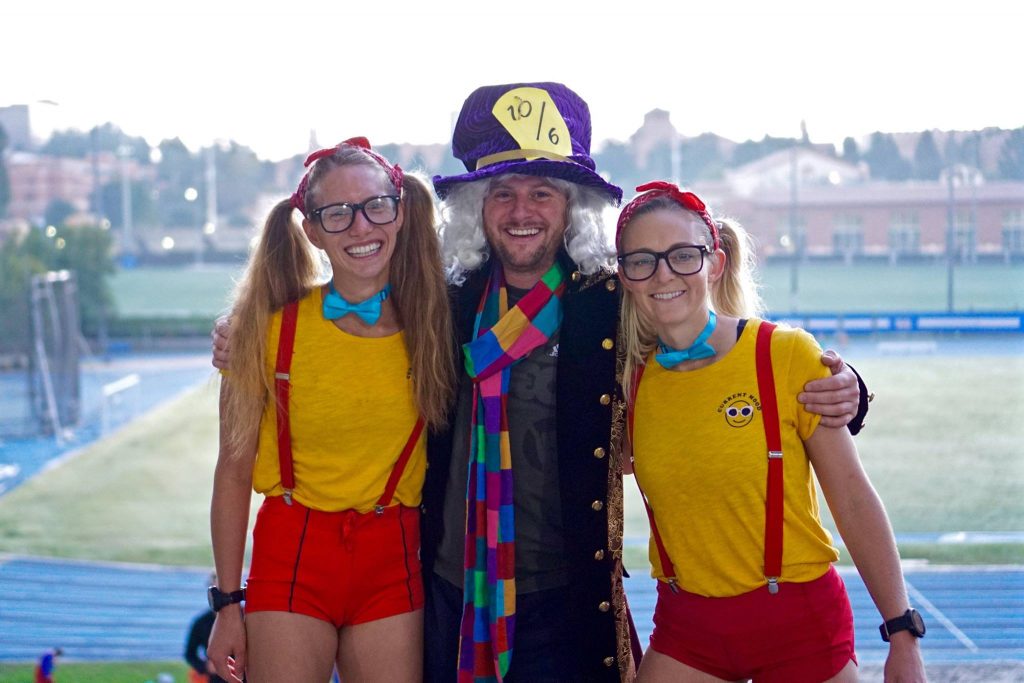 The marathon was sixteen weeks away. I printed up a schedule for my running from the internet which included the mileage I should be hitting each week but nothing like the westside workout was on the schedule. No strength training. Just runs. Over the next few weeks I would scratch one of my runs and make Wednesday mornings at Drake Stadium an integral part of my training. The strengthening exercises were only a small part of the benefit. Many people I was meeting had done the marathon or were signed up to do LA, so there was an informed community from which I could ask questions and find support. Every weekend I was running more miles in one go then I had ever done and the support I was getting from Tara and Maggie calmed a lot of my nerves. Tara was also doing the marathon and she invited me along on longer runs with a larger group. I would never have been prepared to get to that starting line without the support of the Wednesday group. 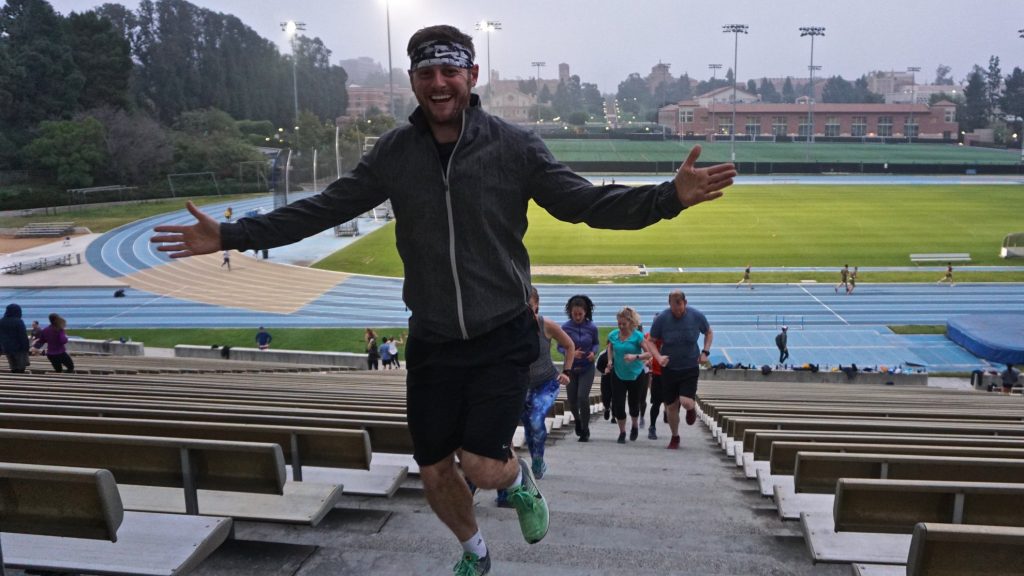 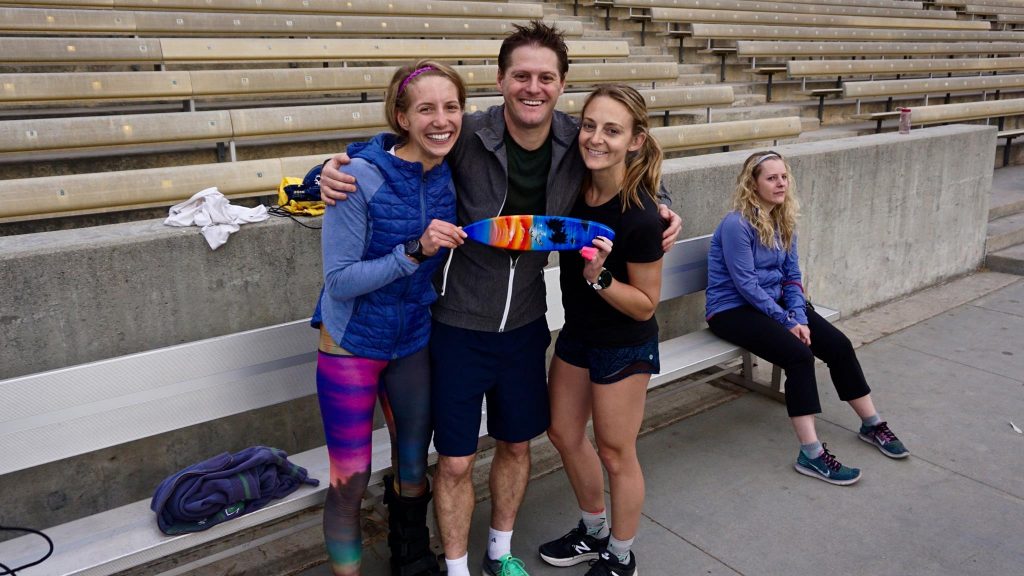 My first marathon began at a steady and fast pace but things did not go entirely as planned. As happens to a lot of people, at mile nineteen I hit the wall. I spoke more about my wall in my marathon story, but to keep it simple I wouldn’t have been able to get over the wall without November Project. At mile 19 I found myself dizzy, out of fuel, and walking to a water stop. I could jog a little, but I wasn’t sure if I would finish until I came around the corner at mile 21 and heard someone calling out my name. It was Jose, a fellow November Project friend who I wasn’t expecting to see at that moment. He ran over, gave me a huge hug and ran with me. Jose is someone who, while I knew casually through the workouts, treated me like a brother in that moment. He gave me the energy to carry on and I’ll be forever grateful. More people from our Wednesday tribe were waiting at mile 22. Maggie and Kevin were there to cheer me on and gave me the last bit of energy to get to the finish line.

I mentioned earlier that when I first joined the Westside Wednesday workout I had no idea what November project was. Over the following weeks since joining I slowly started to see the shirts and read about it. The Wednesday group was pledging to be a tribe. Maggie and Tara put so much work in to every week to make our workouts different, challenging, and fun. It was an honor to be there when they became an official tribe. Over the last year, I’ve hardly missed a Wednesday. From a legendary fourth of July workout, to Beachtober and Halloween. Through it all I’ve met so many people in my community I would have never had the chance to meet. All sharing a love for challenging our selves to be fitter and happier. 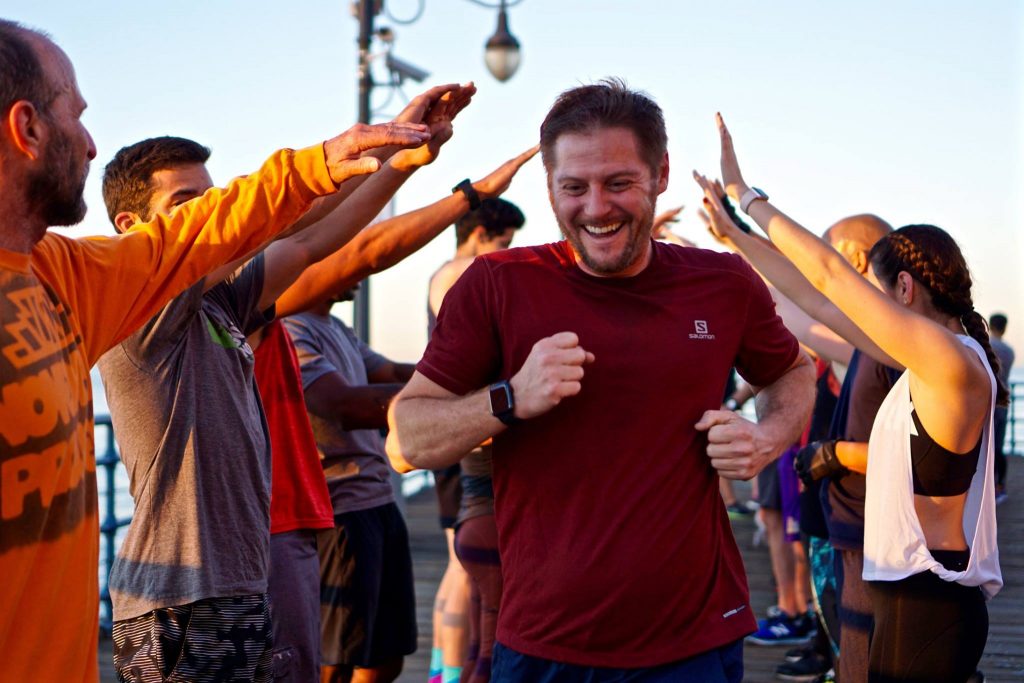 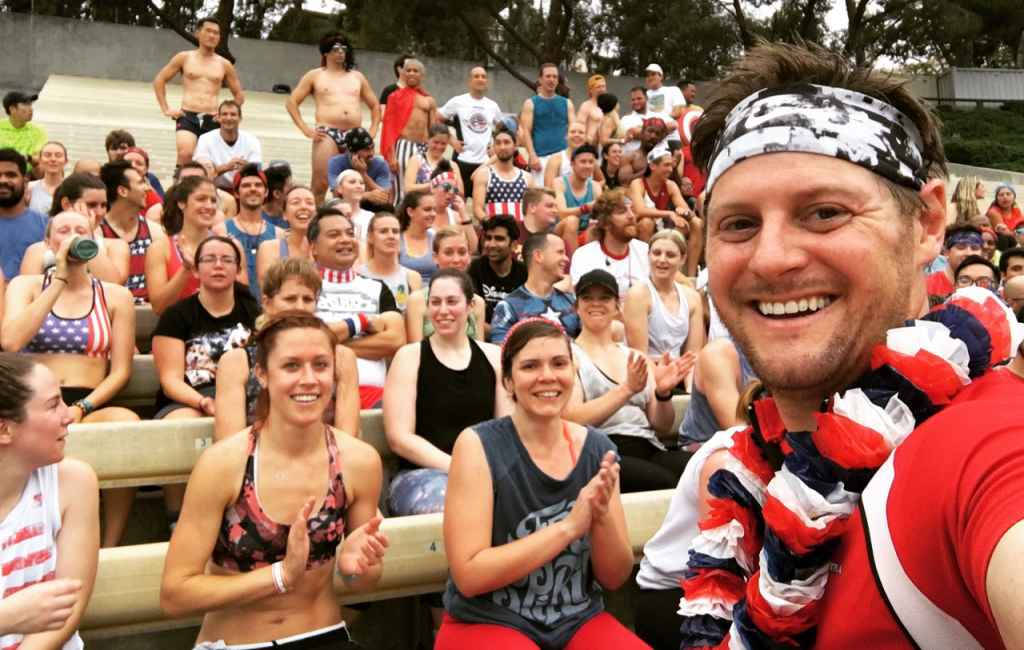 It’s been one year since I met Kevin, Maggie and Tara on the track at UCLA. The magic every Wednesday has not subsided. It only grows. What’s been particularly gratifying is that since then I’ve invited a few others to join the workout group. It’s amazing to see the joy they have found working out together. And throughout it all I haven’t experienced that catch that I was so worried about initially… or it could be that I’ve become less cynical, less suspicious and more open to working-out with others in our Los Angeles community. Perhaps the catch was in the hugs before the workout I was so hesitant to embrace at first. That non-judgmental connection to another not only gives them strength but gives me strength. It is simple but awakens something deep inside all of us. A desire for real connection and support that is lacking in our increasingly hollow digital lives. We are not alone in our pursuits to better ourselves and the world.

If that’s the catch, then I think it’s worth it to just show up, especially for the hugs. Thank you November Project for an amazing first year.
Thank you, Benj- for showing up week after week and always believing in us!! We are SO glad you’re here. 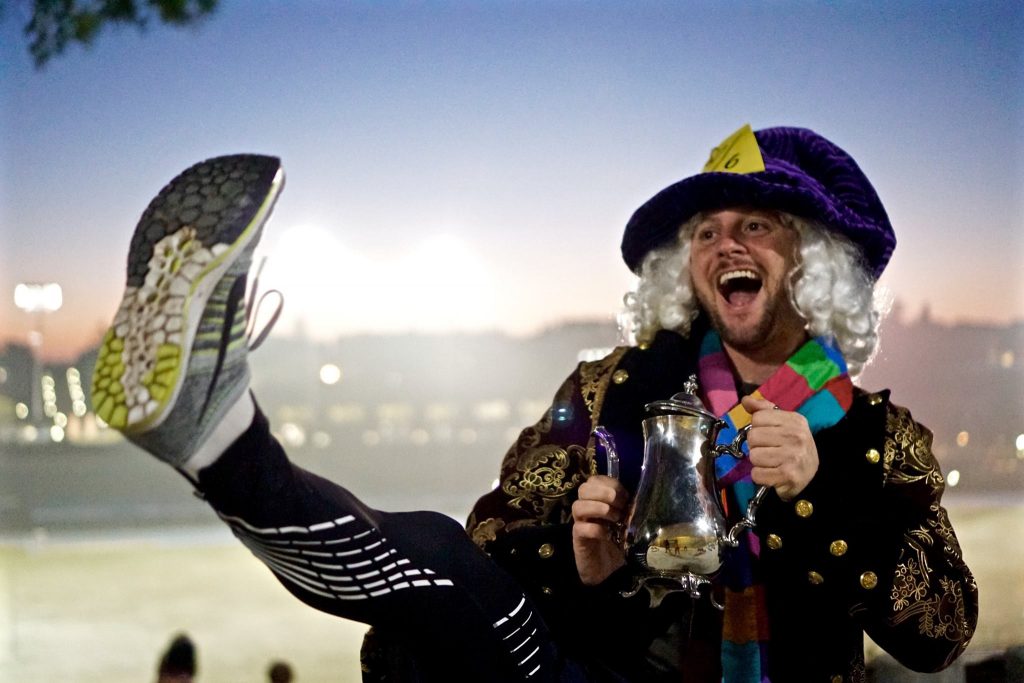 ANNOUNCEMENTS:
Sunday 12.16 – End of the year/Holiday Mixer!! Facebook event HERE!
Are you in our social page? Join HERE!
Share via socials: