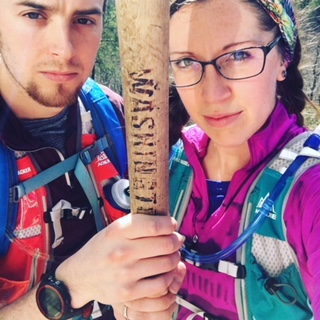 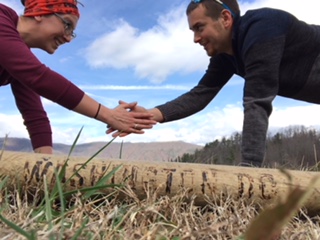 I met Jason and Anne the Friday before the Marine Corps Marathon in late October at Canal Park for our Friday workout. I welcomed them. I tried to remember their names (it usually takes me two to three times, TBH). I figured, them having just moved to DC, I’d see them again soon (turns out, it was already their second workout and I saw them again Friday at the post-MCM party). Since then, I’ve seen this new NP Power Couple over 50 times because Valentines Day was the first workout they missed. The first! They have yet to miss a social event. They’re regulars at post-workout coffees. They’re UBIQUITOUS! And as much as they love each other, they are always striving to meet others at each workout.

Folks, when we talk about how NP allows one (or a couple) to join and embrace and become fully engaged in a community, Anne and Jason embody this. And I have no doubt that just because they received this stick, this oar, this Positivity Award, they will stop coming consistently.

OK, I’ll shut up now. Get to meet them in writing, compare their answers (what is this, The Newlywed Game??), and then introduce yourself at a workout!

1) How and where were you introduced to November Project?
J:  We were in DC for an advocacy event and while Anne and I were out running, someone from NP came up to her and said we should join and she even showed me a photo. We had never heard of it before but there wasn’t one in San Antonio so I kind of forgot about it. Then, I heard Brogan’s interview on Rich Roll’s podcast and I really wished there was a tribe in San Antonio. Fast forward and I accepted a job in DC, so while we were in the process of moving, I thought about how now we would actually be able to check it out.

A: We were in DC on an advocacy trip we did each year, and decided we’d get our run in around the National Mall on Wednesday morning that week. This was back in 2016. I was running past Lincoln when a guy ran up next to me to stop me and introduce NP and invite me to the next workout. I remember taking a photo of all the people running up and down the stairs and thinking it must be so cool to workout there at the memorial. (Turns out it IS really cool.) There isn’t a tribe in SA, (SA has a big after work/evening running scene) so I didn’t really think about it again until we were all moved in here; and agreed we would come see what it was about in person. (Turns out it’s pretty awesome in person.)

2) What do you remember about your first workout or thinking at/after your first workout?
J: It was the Push Up Challenge on Wednesday. I remember the bounce and how I went from sleepy, you know having just moved cross country, to getting pumped to workout! I knew immediately that this was the group for us, an energetic positive group working out in the morning.

A: It was a Wednesday and that first workout there were lots of hugs and SO MANY PUSH-UPS! The workout was when there was a push-up challenge with another tribe. I couldn’t believe how encouraging and strong everyone was, and I knew I wanted to be apart of it. We hadn’t even been here a week and I was stoked about the prospect of waking up early to join you guys again.

3) What motivates you to keep you coming back?
J: Well, it is no secret I love to run but running and working out with this great group of people is even better. I love the idea of being weatherproof and no matter what the weather is, everyone is in a great mood and ready to workout. I love the team atmosphere at NP, everyone is high-fiving and encouraging each other, it is a great and fun way to stay accountable. Oh and the coffee afterward is not bad either.

A: The bounce, the people, & the workouts! On the mornings that I’ve been sore or extra tired, the bounce is when my mood changes and I’m so happy we showed up. The people to push myself with and to laugh with, and that post-workout feeling is always good.

4) What does winning the Positivity Award mean and represent to you?
J: It may seem like a small gesture to people outside of NP, but I know it’s a big deal and it made my day. Being the “new guy” or “new couple,” it felt good that we were noticed for just showing up and being ourselves. Coming from San Antonio and having led a run group, I thought it would be hard to fill that void of community, but I have found my new place with NP.

A: Oh man, it really made my day! J & I winning the positivity award still feels incredible! The award definitely made me feel that us just being us, working as hard as we each can and being supportive of anyone around us, exemplifies what NP is about; and that is a huge honor!

5) If you had to eat a snack in the middle of an NP workout, what would it be?
J: Coffee, a liquid snack!

A: Oooo these delicious things called PBJ bites, because peanut butter anything is always a good idea.

6) If you could travel to any NP tribe, which and why?
J: I would want to go where it all began, to Boston!

A: So, last week I was (happily) distracted from some homework by Steve’s blog post about the Great Skate and that looked freaking awesome… So I’ll say NP Winnipeg!