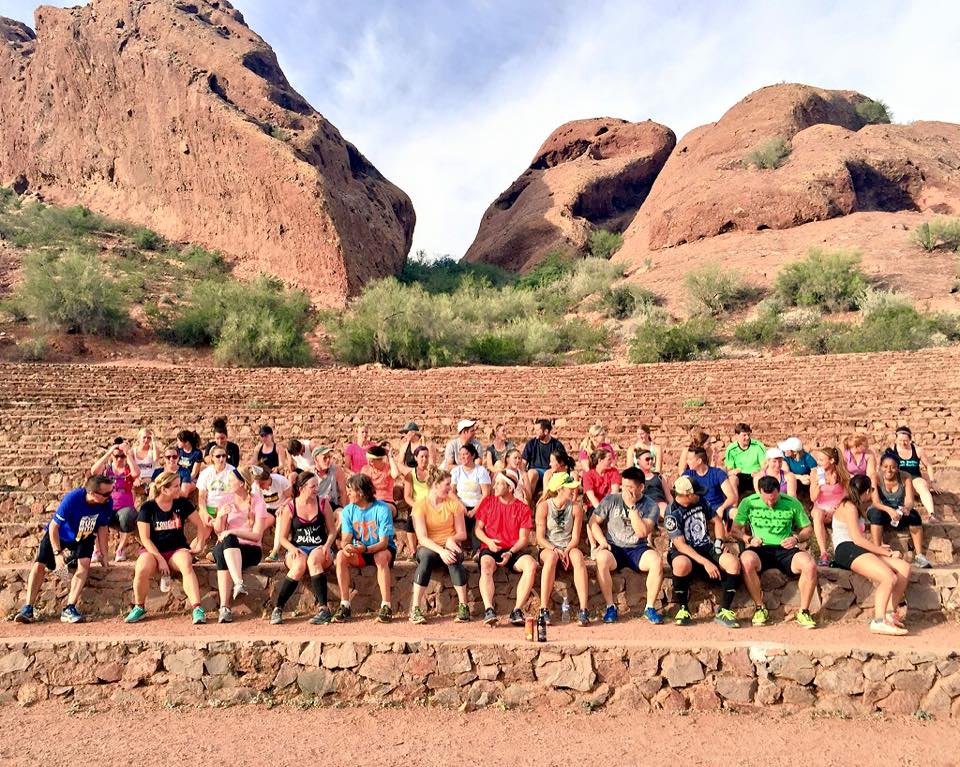 While the majority of you are all across the country and jumping for joy over the thought of summer, we here in Phoenix cringe at the very idea of it. The entire city becomes a ghost town in the summer time. And yes…there are actually tumbleweeds blowing across our deserted streets. The “snow birds” flock away, the baseball stadiums are boarded up, and the golf clubs are left strewn across the streets because they will melt your hand off if you attempt to touch them. It’s a dry heat, but it’s no joke.

After I returned home from three incredible months in DC (the city and tribe who showed me what November Project is all about) I knew it was time to add a little dirt and heat to the mix. When I realized that our pledge-ship and first several months as a new tribe would be during the hottest part of the summer, I immediately thought about waiting for cooler temps. Then it hit me: THIS IS NOVEMBER PROJECT! What better way is there to show the November Project community (and the world) how tough the people of Phoenix are?  We live through HABOOBS for goodness sake – We can handle a little heat. We would just represent another perspective of #WEATHERPROOF and thus the Phoenix pledge group was born.

With a “Congratulations. You don’t suck” and a blessing to start pledging from Bojan and BG, I dragged my friend out to scout the most epic location I could think of in Phoenix that would show what Arizona is all about. This epic spot had everything, Papago Park’s’ weird red mountains towering over our now-beloved dirt stairs, a killer view of our city, a lot more dirt, and a brutal lack of the one thing all Phoenicians crave, shade from the summer sun (#weatherproof). So, two became six and within a few short weeks, six became sixty. Trevor found us through social media and was pumped to jump in and help co-lead. His love for November Project started during his time spent in San Diego and is a great example for our tribe.  Since then, Brogan and Goldie visited us for a pop-up and we have basically been on a high that hasn’t quit. They were beyond motivating and the energy they brought to the workout that day has carried on in our members since they left. After a bit of suspenseful radio silence, I got a text from Brogan saying “something epic is about to happen” and without another word about it Bojan showed up on our doorstep. Bojan silently crushed everyone on the steps before introducing himself, handing over the coveted stencils and positivity award, and announcing that Phoenix was now legit.

Which leads me to this week, our first “official” workout, where sixty+ incredible individuals got up and ran the stairs at Papago Park Amphitheater despite the excessive heat warning. The highlight for me was getting to hand over the first positivity award to my friend Ashley – who if she hadn’t believed in me and run those stairs when it was just the two of us, our headlamps, and that creepy guy playing the guitar, this tribe might not be here. It is the people of the tribe, like Ashley, that are heart and soul of November Project and make this movement what it is.