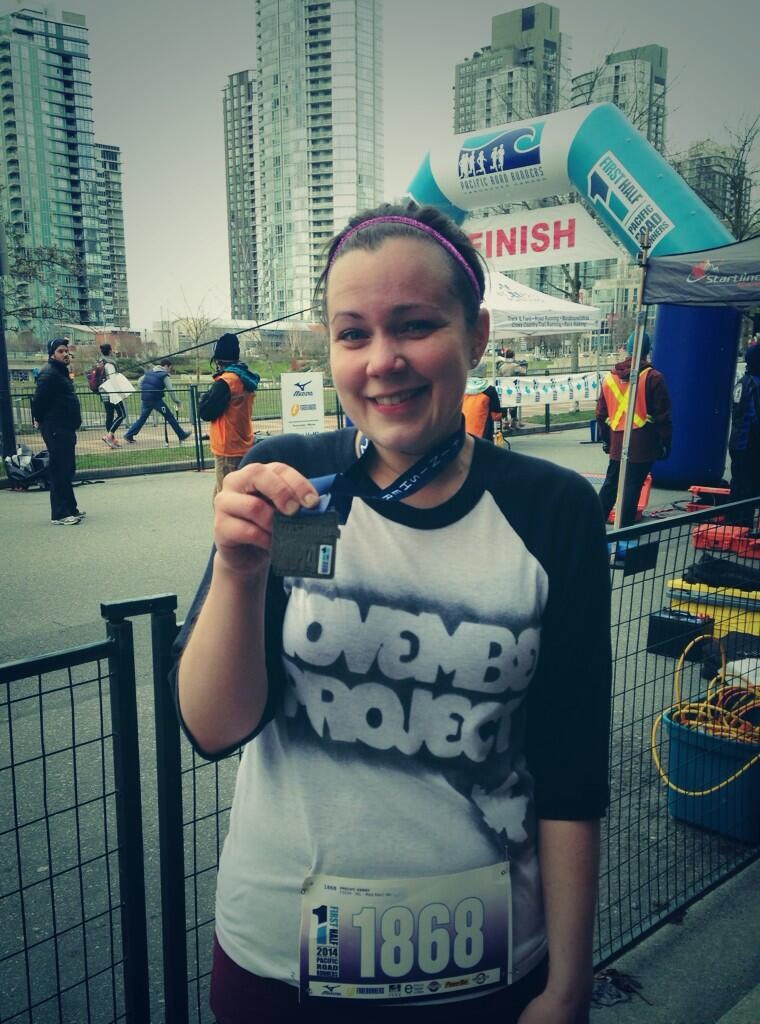 We always say that we want to make a positive impact on tribe members’ lives. We have no better example than Kerry Precht. It started with her secretly working out beside us at the beginning and overcoming her fear of hugs, and evolved to her taking care of all of our grassroots gear tagging throughout our cold winter. She may not be the loudest tribe member, but AF, JF and me know that she has one of the biggest hearts in the tribe. On a side note, I know how much it eats her alive when there is a grammar mistake. That is likely not going to change anytime soon, sorry. I could tell you story after story about Kerry but there’s no better person to tell her story, than herself.

I read a lot of the past personal blog posts before writing this and I’m struck by how many things November Project means to people: community, friendship, accountability, strength. All those things resonate but for me, more than anything, November Project is about conquering fear.

I have to give you some background to explain this. I don’t come by exercise or even mild athleticism easily. I probably should, because I come from an active, athletic, nice, supportive family. (Maybe I was adopted?) In other parts of my life, I’m generally at ease. I’m not scared. But while my sister was a unicycling, soccer and hockey goalie playing, tree-climbing biathlete and future aerialist, I was the kid (and adult) who found athletic things too scary for words. For example, as a six-year-old soccer player*, I dragged waaay behind the action, because maybe the ball would hit me or maybe I’d kick it in the wrong direction and people would yell at me or maybe some other catastrophic thing would happen.

By the time I was in my twenties, I was very, very overweight and I felt like I was stuck. It was, without question, driven by being afraid.

These are some of the things I was afraid of:

One. Doing any form of exercise in public because people might judge me for being slow/sweaty/fat.

Two. Feeling shitty about myself because inevitably, other people would be faster/better/cuter-while-working-out.

In the face of such crushingly unreasonable fears, it often seemed a lot easier to hide. It was also crappier. And less happy. And less hopeful. And, despite an excellent family and practically perfect friends, it was often lonelier.

Skipping all the parts of the story that involved me deciding to start moving my body, in December 2011, I started walking. Then I left a job and a tiny town that were, on the whole, not good for me. I came back to the city and I started going to the gym and started running.

By the time Andrew Ference signed with the Edmonton Oilers and brought November Project to town in July 2013, I’d run my first half marathon in a slow but glorious 2:18:52 and I was training to run my second half that August in what would turn out to be even slower and depressingly sucky 2:21:03. I’d dropped about 65lbs out of what is now closer to 80lbs. Things were happening. But I hadn’t really dealt with the mental stuff – the fearfulness – and that’s where November Project comes in.

In a completely uncharacteristic move, I showed up for the very first November Project Canada workout after seeing the tweet from Andrew. I went by myself because I couldn’t convince any of my friends to come with me. I went even though there was going to be a professional athlete present. It was terrifying. I went to the first two stairs workouts too, and didn’t talk to anyone even though I recognized Nadim, Dayle and Brian. (I almost offered to take this picture. Instead, I chickened out.)

In mid-August, I sucked it up and started talking to people. I let strangers-who-have-become-friends hug me and encourage me. I discovered a wonderful community: there are people I only cross paths with at 6AM on Mondays, Wednesdays or Fridays, people I run with on the weekends, and new friends who have become integral parts of my daily life.

I am a work in progress. I think it’s a lot more difficult to change your mind than to change your body. To some degree these things have to happen together. But I’ve found that changing my mind requires community. It’s hard to let go of things I’ve told myself for decades. The November Project community – even though most of them don’t know it (or didn’t, till now) – are my allies in the dying days of my battle against a scaredy cat who sometimes really, really tries to resurrect itself. Just by being present, they are helping me replace all the bad adjectives I used to embrace with words like “capable” and “strong”. It is a gift. A huge, fucking awesome gift.

These are just a few of the fear-crushing things I really like about November Project:

One. Fit people are shockingly nice. I never feel like anyone is frowning on me for being too slow or too sweaty. I still have to convince myself, some days, that it’s okay that I’m not as fast as others. Sometimes people I know from other places show up and I have to talk myself out of slinking away to hide under the stairs or shuffling off of the hill into the forest. But I am not afraid to exercise in public any more. Not even a little bit.

Two. People are going to be faster/better/cuter-while-working-out than me, but so what? It’s what I do that matters and I am getting stronger.

I ran my third half marathon this February and cut twelve minutes off my last best time. My personal best is still above two hours (it’s 2:06:29). But I cut twelve minutes. I think my favourite thing about this is that it’s not something I accomplished alone. I’m the only one who can get myself out of bed in the morning and show up at the destination, stairs, or hill. I have to put my feet one in front of the other. But I’m moving faster and pushing myself harder because of the community that’s working alongside me.

Three. I am learning that it’s always more important to #justshowup than it is to worry about how good I’m going to be at something. I’m only going to learn if I try.

I’ve also discovered that my November Project friends believe I can do things I don’t yet realize I can do. They have somehow convinced me that they won’t be disappointed in me as long as I show up and I try. This is huge. No-one’s ever convinced me of this before (which is more a reflection of me than it is of my family and friends, just so you know). I am finally learning that when other people believe in you, it’s a lot easier to believe yourself.

To this end, I’ve signed up to run the Honolulu marathon in December with ten other November Project Canadians. The old, scared me would have said that I can’t do that: 42.2 kilometres is too far and my body’s too heavy and my left hamstring will probably snap in half. But when Chris said I could do it, the new me believed him. I guess there’s something to the fact that he and everyone else are running hills and stairs and doing push ups and sit ups and fire drills alongside me three (or more) days a week.

It is worth waking up at 5 o’clock in the morning to be part of November Project because it is changing my life for the better. I don’t know how to tell you how much it means to me when Josh and Lorin run to the hill with me on Fridays. (They’re fast.) Or when Chris and Chloe push me up the stupid hill at Emily Murphy and treat it like a matter of fact that I have enough energy to add sprints to the run. Or everything that Jen and Nadim do to keep us all going and together. Or when all the people who so warmly invite me running on non-NPC days. One of my best training runs during the winter was a cold Sunday run with Camper Dave. I could give you a thousand more examples.

* A few years ago after watching Bend it Like Beckham and She’s the Man too many times, I decided I wanted to play soccer after all. I freaking love it, even though I’m not very good (the consequence of only really starting to play as an adult). This summer, one of my NPC friends, Vincenza, is joining my team. Fun, right?