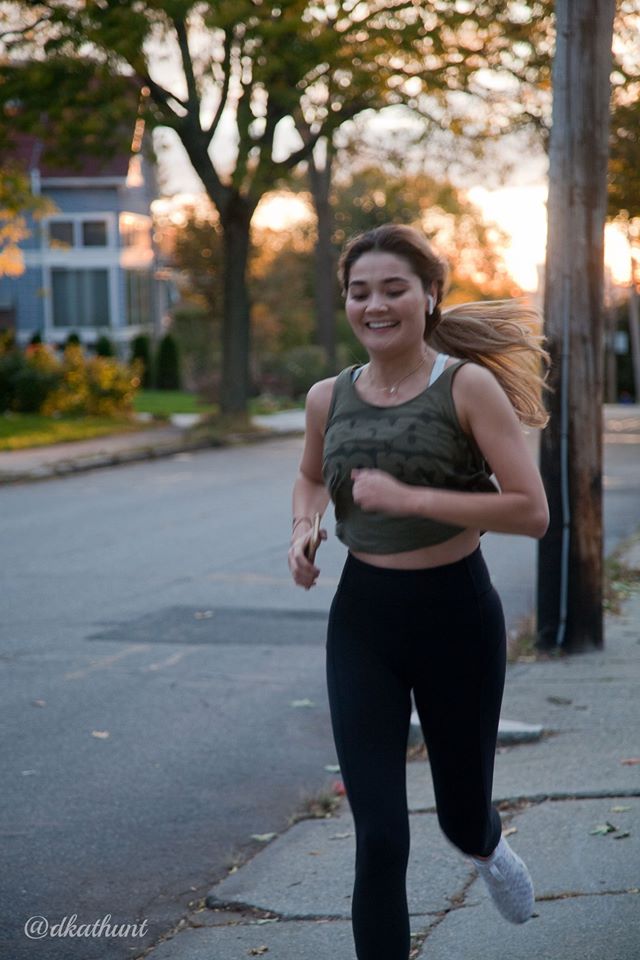 NPP: Installment 3. This is the regular feature on NP_BOS blog called November Project People (NPP). NP members interview other NP members, and we all get to know each other a bit better. #community

It’s no secret that I love people, especially new friends who are willing to let me sit down with them and do a deep dive into their soul. That’s just pure, unfiltered good shit, as far as I’m concerned. Because I truly love the challenge [opportunity] of getting to know someone brand spanking new—someone I’m curious about and I’m around a lot but know zero about. That’s why this new NP Interview Challenge was so exciting to me. It combines all the things I love, in one simple Word doc.

So the split second EmSauce and Capoze issued the challenge, I was on it like white on rice. I knew exactly who I wanted to learn more about and I all but knocked her down the next time I saw her at Friday hills. In fact, I’m pretty sure I didn’t even ask Z if she wanted to sit down with me. I think it kinda came out like, So, I think you’re awfully sweet and I wanna get to know you better, so the next time we’re together at a workout we’re having breakfast and you’re telling me everything there is to know about you. Ok? Cool. Thanks.

Now when I say Z, I’m talking about Zulfiya Akbarova, one of my new favorites in the NPBOS community. And I got the rare opportunity to hang with her after a recent Monday Deck that fell on a holiday when I sweet-talked her into spending the morning chatting with me in a tiny breakfast joint in Somerville.

See, the thing is, even though Z’s been coming to NP for over a year, you still might not know her by name yet. That’s because, while she comes to run, and sweat, and be part of the greater community, she does what a lotta people do and she bolts right after the workouts so she can make it to her day job on time. And that doesn’t leave too many opportunities for a good, long, post-fitness hang. So short of a random social here and there, you won’t see her around as much as she’d like to be seen. That’s where I come in.

So everyone, meet Z. She’s a special one. Trust me. And you’re gonna want to go out of your way to get to know her. And here’s why…

#1 In spite of the fact that the friend she heard about NP from isn’t even part of the tribe, Z just showed up anyway to her first workout. Solo. Because she had such a strong desire to grow her social roots here in Boston and to her, NP sounded like the perfect way. And I love that because it’s a ballsy move. Anyone who’s willing to step outside their comfort zone and into that intimidating place of being the newbie is always gonna be the person I want to get to know better.

#2 Z loves November Project. And everything that that implies. Like loves. Reason number two for me that she’s good people. Because anyone who gets us, just plain gets IT.

#3 Z adores her mom, which puts her in a special class of human in my book. Because moms. And even though her own mother is still living in her home country of Uzbekistan, Z’s goal is to be able to help her mom retire and move here to the states. So, we could pretty much stop the interview right here because that just about says it all about who she is as a person. But we won’t, cause there’s a lot more goodness to talk about. Onward.

#4 Growing up, Z dreamed of studying abroad here in the US, so she earned herself a scholarship and moved to Iowa to study accounting. And of course, she crushed it because she’s super-crazy smaht.

#5 After graduating college, Z moved from Iowa to Boston where she lived on her aunt’s couch for a year. Like an entire, full, whole year. On a couch. To pursue a better life. I mean, damn, gurl. (In love with her yet?)

#6 With $2K saved up and three bags of clothes to her name, Z moved off her aunt’s couch in Needham and took her shot at making it on her own in the big, scary city. Right in the middle of the last big recession. Knowing no one. Did I mention she’s got a ginormous set of balls?

#7 After a chunk of time, she got herself a job working for an asset management company here in Boston. And she’s been moving up the corporate ladder, making a name for herself, and killing it every damn day since.

#8 Unless work keeps her away, you can usually find her at Monday Decks, at Harvard Stadium on Wednesdays, and running Summit Avenue on Fridays. Because she truly loves and appreciates this community and this movement and this opportunity we all get to be together exposing the best versions of ourselves. And she’ll be the first to tell you that NP has helped her find a family away from home. “November Project is the one thing that I’m sure I’m doing right in my life.”

#9 Z believes herself to be a truly fortunate person. And she is. But she’s also an insanely driven and accomplished, and hard-working person. Because at age 34, she’s a totally self-made human being, living and thriving on her own, with a rich and devoted family of friends that she’s prouder of than almost anything else in her life. And that’s something else I love about her, because we have in common that intense feeling of love and gratitude for the beautiful who represent the family that we get to choose in our life.

#10 She’s excited to deepen the relationships she has within NP and made me promise to let the tribe know that she’s always there. For a ride. For help. For a shoulder. For a conversation. For friendship. For just about anything. Because to her, friends represent family and that’s pretty powerful when you’re living thousands of miles away from your own family. In fact, it’s worth noting that since our interview well over a month ago, Z has gotten to know my family and I consider her a dear friend. Simply because I invested a tiny pocket of time to get to know her better.

So seek her out. Say hello. Choose her as your hoisty or pushup or burpee partner. You won’t be sorry. Because she’s worth the seek. And while you’re at it, connect with other people too—especially the ones you don’t know—the ones who are on the periphery of NP, trying to make connections and build relationships and plant some friendship seeds. Because if it’s one thing that NP and life has taught me, it’s that we’re better together. Way better. And all it usually takes is the ice being broken.

Now go smash some ice. And give Z a squeeze on your way.

NEXT MONDAY WORKOUT 12/9 at 6:29am will be at Medal of Honor Park, in Southie. Map right HERE.