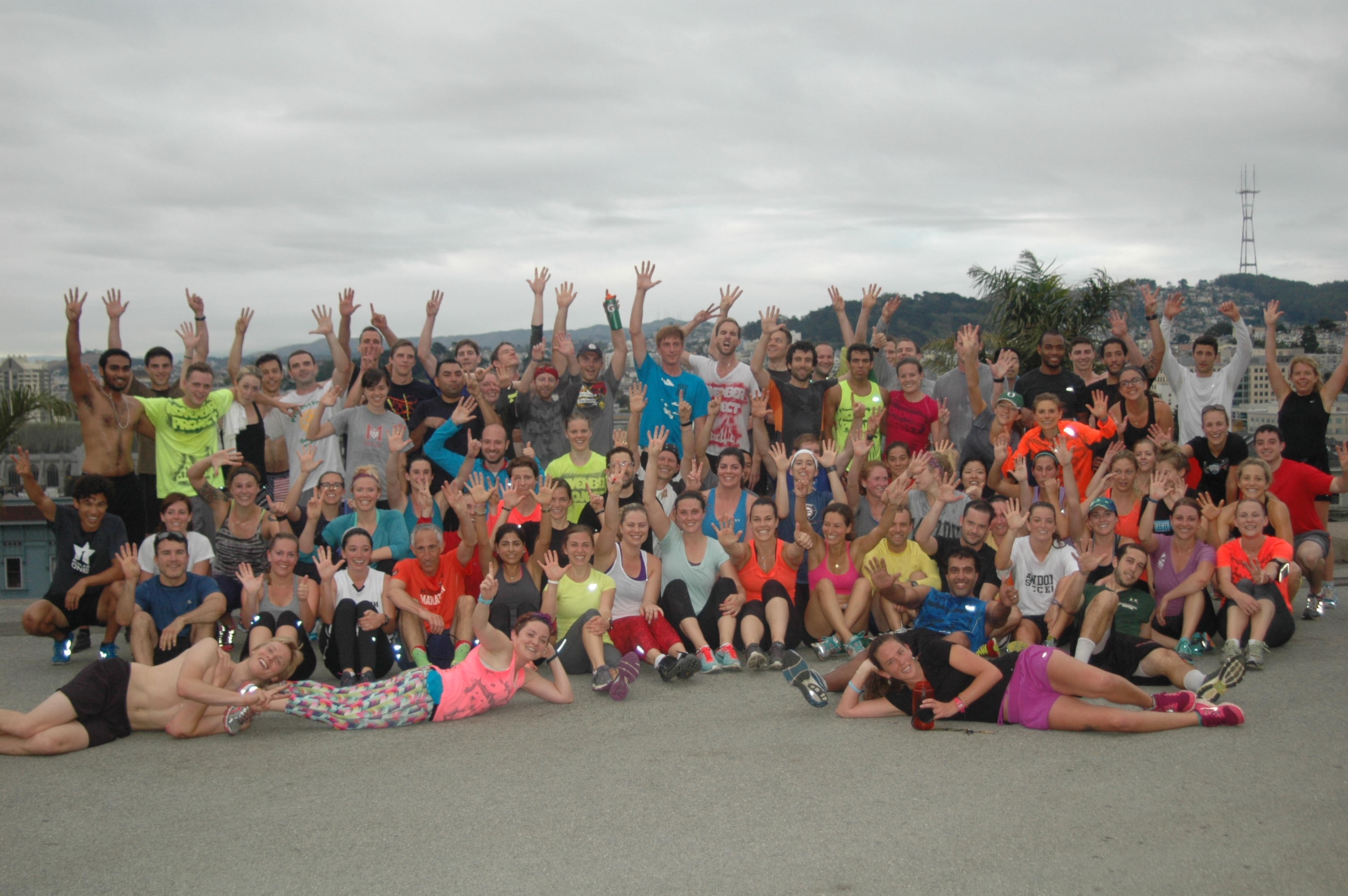 Board games. Sure, they’ve been the cornerstone of our economy for decades. But now they’re quickly becoming the cornerstone of November Project San Francisco. This morning, Alta Plaza Park was transformed into a massive game of Chutes and Ladders. Here’s how it worked (thank you, Microsoft paint):

All players started at the bottom (on the 1) and played a quick game with a random stranger / friend / new friend / ex-stranger/ new lover / NPSF-er (I’ll fill you in on the details of the game later on). Winners climbed the stairs (ladder) to Level 2, while losers had to take the chute (blue line). The chute wasn’t much of a chute for losers on Level 1 (since they were already at rock bottom). Losers on Level 1 had to run out to the south-east corner of the park and back, where they geared up to play again. The winners, now on Level 2, played the game a second time with a second stranger. Once again, winners took the ladder, losers took the chute. Losers on any level followed the blue line and would wind all the way back down to Level 1. This continued for half an hour, with several members making it all the way to Level 6. These members were sorely disappointed to find out that their prize for reaching the top was 10 burpees and a quick trip back down to Level 1.

The entire course was laid out with chalk, and exercise instructions were drawn out at random points along the chute. So picture this; you make it all the way up to Level 5, but lose the game. You have to zig-zag on that blue line / chute allllllllllllll the way back down to Level 1. This means you’re passing the sergeant jump station, the push-up station, the sit-up station, AND the leg raise station. Brutal! The higher you climb, the higher the stakes!

So now the game. And oh, what a great game it was! We’re calling it “Air Squat Compliment Contest” … or, you know, the next name we come up with. Players faced off with a random stranger, went into air squats in unison, and alternated giving each other compliments. “You have nice skin!” “I love your shirt!” “You have a glorious sparkling aura!” and so on until one person hesitated, laughed uncontrollably, or failed to come up with a compliment. This yielded some HILLARIOUS results:

“Your feet smell so good I would love to stick your socks up my nostrils!” – Katy Kunkle

“I knew I loved you before I met you. You would make a great father to my children. Let’s go home together after #BREAKFASTCLUB and put on some sweet Marvin Gaye tunes.” – Viviana (but more likely, Josh lying)

“I bet your mom is really proud of you.” – Lindsay Bolt

Jorge told everyone (male or female) that their _________ (fill in the blank with a random body part) was giving him an erection. Compliment? Not so sure.

Anyways… THANK YOU for coming and playing along. It was a ton of fun!

Get your new profile picture this FRIDAY at HILLS! 6:23am at Hyde Street and Bay Street. We’ll be racing some cable cars. Kenny Wong will be holding #BREAKFASTCLUB afterwards. Don’t miss it.