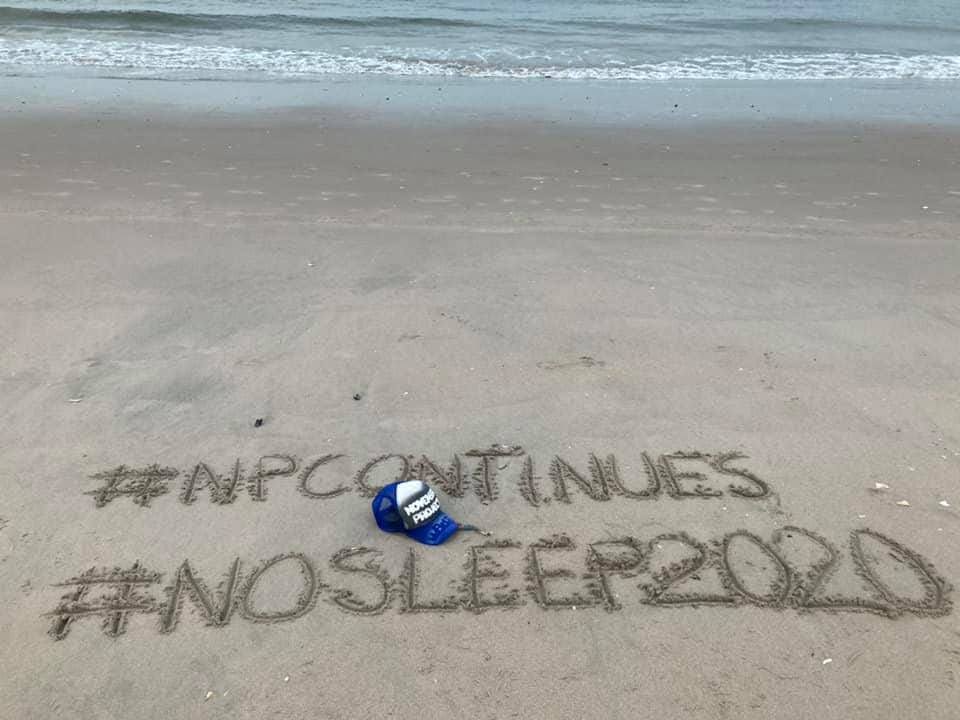 I don’t know about you, but it kinda feels like I got hit by a party bus over the weekend.  Body is sore, I could go for approximately 12 more hours of sleep, but somehow I’m still in an incredibly happy mood.  Over the weekend, 14 teams joined together in No Sleep 2020– a 48 hour virtual relay race.  We were honestly surprised by how many of y’all joined us on this adventure, and we’re so incredibly grateful that you did.  From Madison to Brooklyn, Minneapolis to Grand Rapids, Milwaukee to Chicago, and tons of other NP expats around the country, we came together for a weekend of fitness and fun.  Thank you to all our teams for running and walking with us this weekend:  Chaos, Corunnavirus, DOM SQUAD, Knight Runners, No Sleep Til Brooklyn, Team Northwood, MilWALKee, Rarámuri, Rocinante, Sunglasses at Night, Sleepwalking on Sunshine, Sleepwalking on Moonshine, Run to Fireball River I, and Run to Fireball River II.

Friday night we kicked off at 8pm CT, sending out our first runners with that fresh, first leg energy.  Every hour on the hour, each team would hand off from one runner to the next, for 2 days straight.  Some of us hung out on the official Zoom call every hour for the handoffs, planning out the movies we would watch later around midnight, cheering on everyone coming in and going out.  We discovered that Zoom and Amazon are too smart for us, and Turbo would not be screened.  Instead we selected some smooth jazz for the overnight hours and we watched DOGCAM while sipping our morning coffee.

Saturday morning dawned.  With teams of 12 you were either heading out for your first run to trying to snag some sleep.  Each teammate was covering 4 legs over the course of 48 hours, so unless you doubled up like me, you had a run approximately every 12 hours.  Saturday was a hot one in the midwest, but each team powered through the day.  As the sun set teams geared up with blinking lights, glowsticks, and headlamps and took off into the darkness.  Sun down brought a little heat relief, but not much.  I felt like I was swimming from 10pm-midnight in the city humidity.  If you joined into the Zoom call overnight, you were serenaded by the smooth sounds of Lionel Richie, and of course, accompanied our faithful mascot, Grady on DOGCAM.

Sunday morning we creeped into the final 12 hours of the race!  Legs were definitely not as fresh as they were Friday, but folks were still on the virtual course.  A few teams had emerged at the halfway point as contenders for the most mileage–who would emerge victorious?  Other teams were forced to combine running with paddling and swimming to keep their relays going.

If you weren’t able to join the Zoom closing ceremonies at 8pm to welcome in our final runners, you missed the official contest winner announcements.  There is $0 in prize money, but there are legendary bragging rights until we run again next year.  Note:  After reviewing the Google Sheets this morning, there was a change to the best prediction category announced last night!

Best Predicted Mileage:  UPSET!  After final tallies, No Sleep Til Brooklyn wins, by predicting only 4.1 miles off!  Second place to DOM SQUAD by predicting 7.17 miles off.  The rest of us…we dramatically underestimated our abilities.

Best Baton:  It’s gotta be the Rarámuri dog handoff between Karen and Nimbe.  Clearly dog fans over here at HQ.

Best Photo:  Honestly so many great shots this weekend!  But two of my favorites were Remi Chian’s Coney Island Beach shot and Ken Zugay’s Pizza Wings.  But I highly recommend cruising through the rest of the Google Photos album slideshow (while playing Lionel Richie’s “All Night Long”), or the event page for more shots:  https://photos.app.goo.gl/2D2r41i7JuSZnB9t5

Thank you again to all of our teams!  It was hot, it was humid, it was exhausting, but we hope you had as much fun as we did.  See you in 2021…or sooner if we decide to go for that Guinness World Record!!