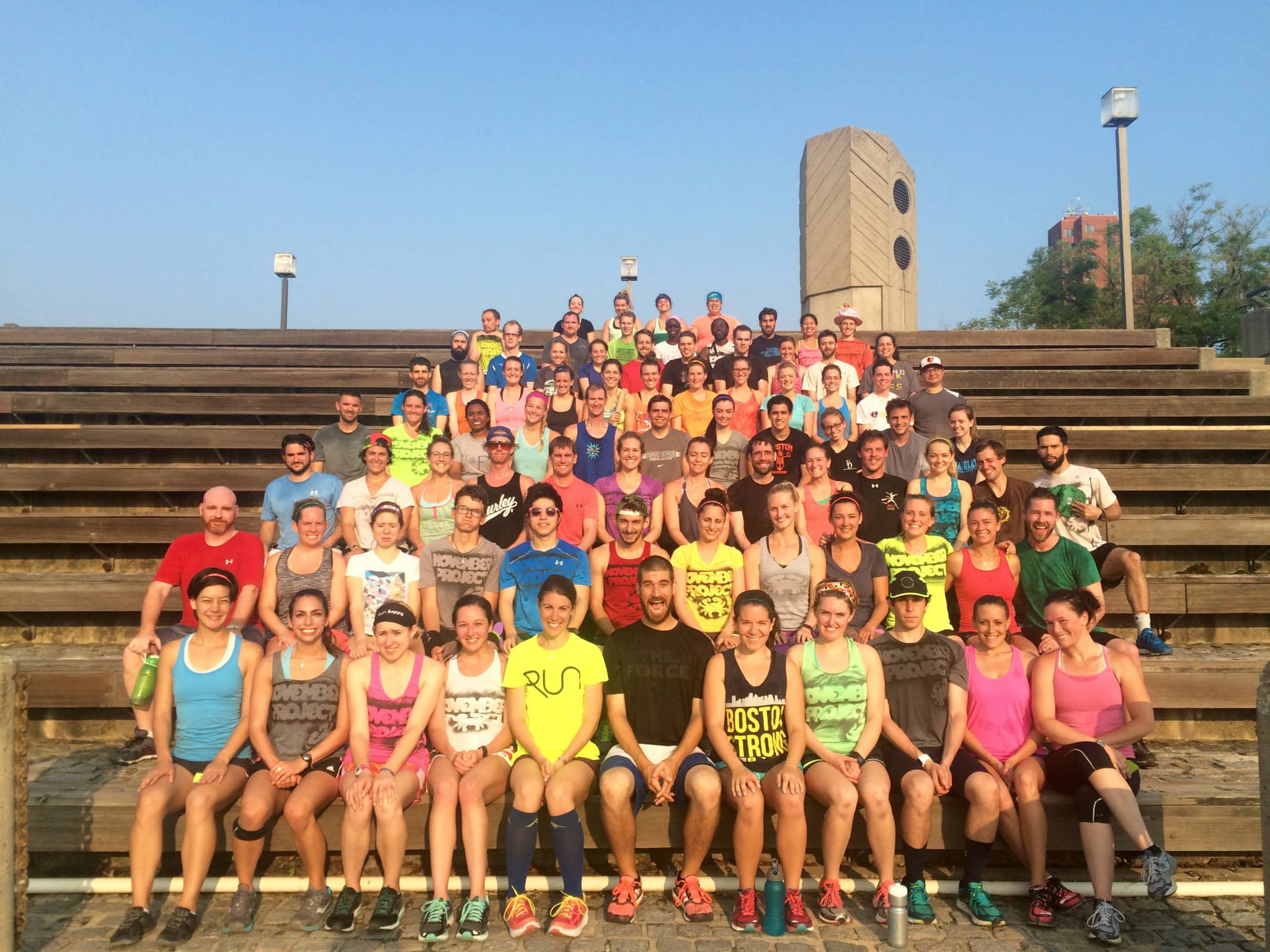 (This isn’t a long post, there are just a lot of spaces)

Now this is a story all about how

My life got flipped turned upside down

And i’d like to take a minute, just sit right there

That was a low blow. Pat has plenty of hair but it’s frigging hard to come up with an appropriate rhyme for Bel Air. We can’t all be the Fresh Prince, OK?!

This post is basically about my man crush on my co-leader. It’s also about why we need to do crazy random things in our life. Focus on that second point…do crazy, random things.  Indulge me as I tell this tale in very short sentences. STORY TIME!

Today was Pat’s birthday which meant we got to do his favorite workout and he had to wear a birthday cake on his head. His Birthday also prompted me to think  about how I ended up standing in front of almost 100 people, screaming ” It’s an NP Birthday” at an individual who, a year and a half ago, I hardly knew. Sometimes I think it’s important to reflect on these odd life moments.

When I was 21 and fresh out of college I decided I needed to get out of town for a bit.  I applied for the Peace Corps and Teach for America. Those didn’t work out so I randomly moved to St.Louis as a Jesuit Volunteer and spent a year working in the East St.Louis school system. I loved it out there but moved back to Baltimore in 2013 to pursue my dream of becoming a dolphin trainer (false). One of my roommates in St.Louis got a job and moved back to Baltimore at the same time, staying with my family in the city for a while. Her name was Carly. Carly went to Holy Cross. Pat went to Holy Cross.

A few months after moving back to Baltimore I was unemployed and decided I wanted to start something called November Project (i’d read about it on my internet typewriter).  Around that time Carly asked me to go to dinner with one of her friends.  Pat was the friend. I bought beer. The beer was Devil’s Backbone.

That dinner went pretty well, although I wouldn’t say we were soul mates quite yet. That came later.

I started pledging NP with a few good friends in November 2013.  All four of us (Pat wasn’t yet one of them) would meet on top of Federal Hill  and pretend we liked being up that early. Pat would periodically show up with this wild haired woman named Sydney that he was apparently courting. ( These things became much more clear later). Pat seemed cool, we sort of became friends, sometimes we talked, mostly I think I overwhelmed him with how cool I wanted to be and how uncool I actually was. The tribe started to grow a little bit, Pat dragged some roommates, Sydney eventually took some sweaty photos of us. Things started to pick up a little bit  more, so when it came time to pick a co-leader I decided I should probably get Sydney’s sweet ass photo and video skillz in on the action. Then I decided I should probably factor in the only dude at NP at the time who was consistently scorching everyone on “PR” day.

2. Get rejected from TFA.

3. Remember those cool Jesuit Volunteers and decide you want to be one. Move to St.Louis.

5. Pass up a job in St.Louis and move back to Baltimore.

6. Carly gets a job in Baltimore

7. Pat decides to become a Bon Secour volunteer in Baltimore

8.  I buy good beer and Carly makes me to go dinner.

9. Pat deciding that running at 6:30 in the morning is ok and actually joins my crazy ass.

Pat and I eventually became good friends. I think… right Pat? Watching all of you wild catz point fingers and yell booyah at him ( and our homie Grant) this morning made me appreciate how complex and odd life can be. So many pieces had to fall in place in order for 100+ people to be able to get together and share a morning together. I’m not saying that NP wouldn’t have happened if Pat, Syd and I hadn’t met…but it wouldn’t have happened like it did. Because of those random decisions and happenings my life has become infinitely richer. Pat has been there through the coldest mornings helping me make that happen. I couldn’t ask for a better co-leader, a kinder friend or a more genuine human being to have along side of me. Sometimes rolling the dice on an experience yields amazing things.

This is all to say: Go do random, wild, unexpected things. You have to. It’s the only way to truly live life.

We say #justshowup all the time but it wasn’t really until I watched Pat receive a round of Birthday Booyahs that I understood the bigger meaning behind that. Just showing up is how all of the best things in life happen. It’s how we meet our best friends, how we find new jobs, pursue new adventures, get new hobbies and maybe fall in love. Netflix is awesome but unless you make a rash decision to try that new roller skating rink or move to St.Louis you may be missing out on beautiful, beautiful things. Go do something new, something crazy, something random…and bring good beer with you.

Take Big Bites out of Life