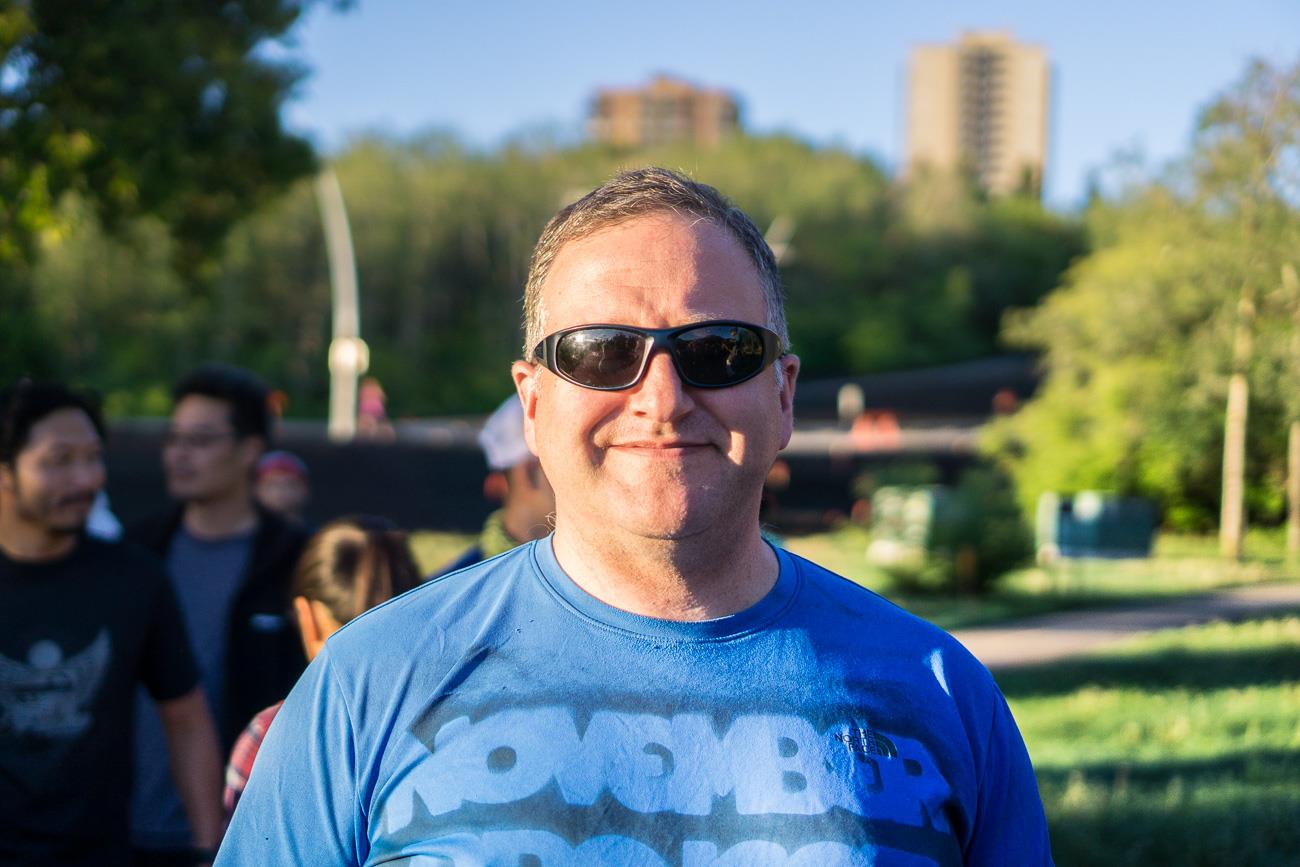 I am excited for you to meet one of the most cheerful members of NP Canada. While most people do not choose the coldest time of the year to join an outdoor fitness group, Joel did! I clearly remember that workout – one of our most difficult Monday circuits that included stairs, bridge sprints, and body weight exercises…I’m really glad we didn’t scare him off! A special memory I cherish is having Joel join me for my 40k 40th birthday run. Take some time to read and watch why Joel is hooked on NP!

So it’s October 2012 and I have just returned to Canada from an overseas assignment and landed in Sarnia, Ontario.  Having spent most of my life in Edmonton, I was used to the great running/fitness community that YEG had to offer.  A smaller city like Sarnia really had nothing that could compare.  Googling to try and find some local groups, I came across this nifty YouTube video that was my first exposure to NP.  Nothing like giving the true meaning of a #VERBAL.  You might just recognize one of our leaders:

I was fascinated, and this led me to a couple of articles that got me interested:

Fast-forward to 2013 and I see a Facebook post that Andrew was traded to the Oilers, followed later by another post that he was bringing NP to Canada.  Now I was having some serious #FOMO.  Could not get transferred back to YEG, so my wife Debbie and I decided to try to:

& another one featuring Bojan and Brogan: November Project – The Story Behind the Movement

Here was my first major challenge – Debbie is not a morning person! Hardcore workout fiend – Yup!  Never say die attitude – Yup!  Push yourself until you puke – Yup!  Wake up at to get to a workout -whoa boy, she’s got limits.  Truth be told, Deb did make a real effort to give ‘er a go.  We just could not recruit a tribe.  And to throw salt on the wounds, my buddy Steve Baker joined NP Canada shortly thereafter and we all know how he likes to post. Major #FOMO!

Fortunately, in January 2016, we started our slow move back to Edmonton.  It was a dark and stormy morning, when I honoured my first #verbal by meeting up with Steve and Hi-Five Guru – Spencer Gerlach by the Talus Dome Silver Balls.  It was bridge month and NP was meeting on the Quesnell.  After being introduced to Jen’s version of Bounce and signing my life away on a waiver, I finally got to experience my first Monday morning workout and then a whole pile of hugs and I was hooked!

In February, I finally got to be in one of those cool YouTube videos for NP Canada:

By March, I got my first taste of #NPTravel with a stop with NP Iceland.

Then in April, I started running stairs at Commonwealth with my buddy Bill.

July gave us a chance to take in our first NP Summit in Ontario.

September brought more great hills and fantastic pictures from Steven Czorba – we are so very fortunate that you help capture the spirit and life of the tribe.

I could go on for hours, but instead I will leave you with one of my moments so far in with NP Canada.  There was that time that Jen almost floated away…

Unfortunately, I still travel quite a bit and most of the places that I go, do not have a NP to visit.  I always look forward to getting back to my favourite tribe – NP Canada!