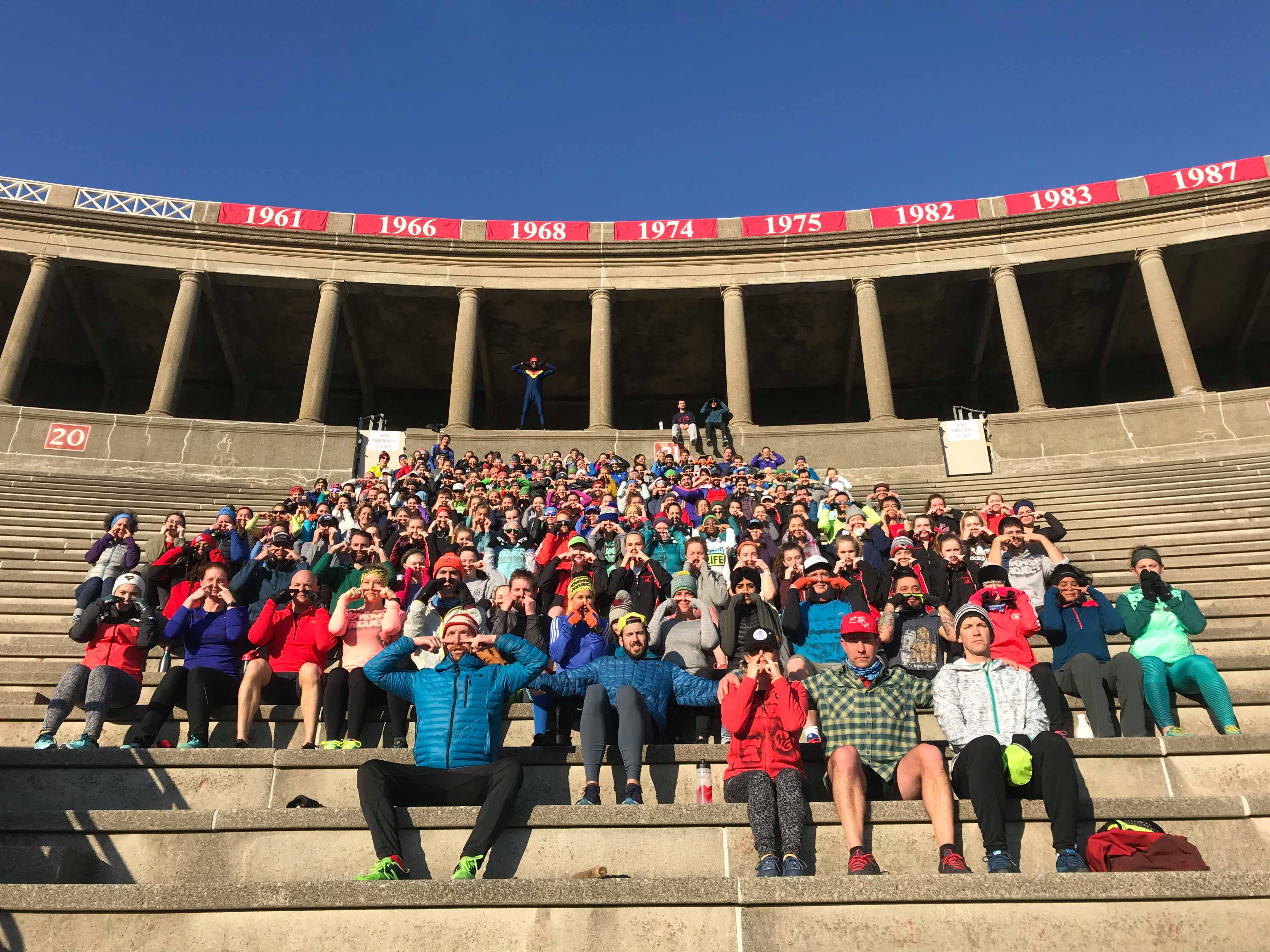 There’s a lot of love in Boston, after the marathon and everything, and that wave of love continued this morning at NP.  It was one of those classically beautiful mornings.  The 5:30 crew saw the sun rise in amazing colors over the endzone of the stadium.  The 6:30 crew watched the sun shift from brilliant pink on one half of the stadium to a bright light overhead, while appreciating how brisk the wind was on the 20-1 half of the stadium, and how warm it was just on the other side of the sun-line.  Everybody crushed some stairs, and they were just as hard as they are every week!  The hype was still strong after the marathon, with some badass humans still in town from Edmonton (NP_CAN), from San Diego, and other places.  It was just one of those mornings that you leave the stadium and you realize how glad you are that you showed up–no matter how tired you were before, or how breezy the wind was, or how un-spring like the temperature was.  It was just great to be there.

You know where else is great to be?  Mile 18 on Marathon Monday.  There’s a lot of love there too, and there was this week, despite the incredible weather.  The Tribe had lots and lots of runners come through the Mile 18 Cheer Station, both from NP and everyone else.  And if you ever wonder how much of an impact that kind of support, cheering, and excitement has on the runners, keep reading.

We’ve got a guest blog from Ari Ofsevit, a tried and true NP_BOS tribe member, with a penchant for all things math and science to explain, understand, and geek-out about NP workouts.  The following is his account of the “Scientific Impact of the 2018 Boston Marathon Mile 18 Cheer Station,” or something like that…as explained by his data.

When I went back and looked at my Strava for the marathon I noticed something odd when I turned on the “cadence” feature: there were two dips in my cadence.

The first was in Framingham. I’d been running with Henri Romeo (#NP_LAX) when I decided I had to use a port-o-John. I’d peed before the race and was well-hydrated (#NoDying2018) and usually figure that once the race starts, my body will put any excess liquid out as sweat. Except when it’s deluging rain, my body says “fuck that” and it goes in to the bladder. So I ducked in to the stall  (I wasn’t the only one; it wasn’t quite Monty Python’s incontinence marathon, but close) and my cadence went down.

So at Mile 6, you can see that my pace drops at the same time my cadence does for the short time in the restroom. Both then even out for the next 12 miles (I was very happy with my relatively even splits, although it may be more of a case of “I have to keep moving to stay warm” than anything else).

Then something happened later in the race. At first, I didn’t make anything of it. After a night of sleep and another look, I realized it was right around #Mile18. It took me a while to figure out what had happened, and at first I still thought it was a blip in the data. Then I looked more closely. My cadence fell from 178 to 92 before returning to 176. My pace actually picked up, and it happened on an uphill. And I didn’t remember stopping, or walking, and I wouldn’t have been walking a 6:30 mile anyway. Then it started to come together. My cadence is measured by my watch. I wear my watch on my left hand. #Mile18 is on the left. That’s not a set of bad data. It’s when, for 13 seconds (yes, I checked the gpx file), my watch went from measuring steps per minute to high fives per minute.

Overall the crowds were thinner this year, but you wouldn’t have known it between Exeter and Dartmouth Streets. (Sidebar: #Mile18 is one of two sections of the course between Exeter and Dartmouth, the second, of course, being the finish line. How cool is that?) #Mile18 was the second loudest spot on the course (we’re still a bit behind Wellesley College, but they must have people out there in shifts, or something, so they don’t lose their voices). The high-fiving was a tunnel of familiar, if drenched, faces, hands extended, positivity exuding in the rain. Like November Project, positivity is downright #weatherproof. It’s one thing to come and cheer on a nice, sunny day. It’s another to #JustShowUp on the rainiest marathon ever.

Huge thank you to all the volunteers at the feed station, the med tents and everyone cheering at #Mile18. The NP #community is amazing.