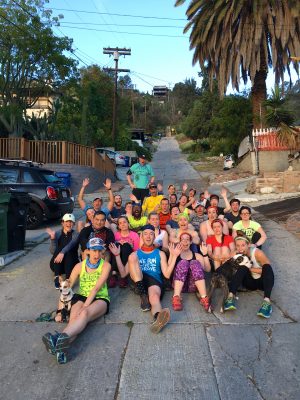 Just like that, week 3 of #APRHILL has come to an end. Next week will be an emotional week for me. First up is PR day. A torturous combination of Widowmaker repeats and a burpee ladder. My heart tells me I can do it. My brain sends every chemical receptor in its arsenal to try and get me to stop. My legs remain silent while having that look on their face that my mom had when I was a kid, and I knew that once I got home, I had hell to pay. So yea, Wednesday is going to be great! Friday’s breakfast of chompions is my favorite set of triplets, Micheltorena. First hill, easy peasy. Second hill, lemon squeezy. Third hill, yea Frodo would have just kept the ring if this was the way to Mordor.

Time for some honesty. The hardest thing about next week is that after Friday, I won’t be able to say #APRHILL until next year. It just rolls off the tongue with such eloquence, and I’m not ready to say goodbye! Also, can’t wait for all those JT memes to start flooding IG/FB…

Now seems like as good a time as any to write something that has any significance: SCORE UPDATE!

Coming into this morning, Team Mess held a lead of 990 over Team Kait’s 861. After this morning, Team Mess has increased their lead to be 1075 over Team Kait’s 925. Next week is the 4th and final week. Can Team Kait climb their way back to the top? Will Team Mess continue to #justshowup hungry for more? Who will #recruiteveryone to their side and claim vertical dominance? WHO WILL BE SUBJECT TO FUNISHMENT?! Tune in next week 5:27/6:27 am pst on Wednesday and 6am pst Friday.

We’re almost getting to the fun fact!

Battle of the Babysitters – Joel and Molly are our first set of #babysitters, and they’re excited to take charge on 5/4! GET HYPED!

Finish the Ride/Run – Sunday 4/29 we are racing/cheering our faces off in our very own backyard. Cheergang location to be announced, but if you’re not racing then come support the running community in Griffith Park!!

FUN FACT: Despite its name, Worcestershire sauce was originally an Indian recipe, brought back to Britain by Lord Marcus Sandys, ex-Governor of Bengal. One day in 1835, Sandys appeared in a prospering chemist’s emporium in Worcestershire, England, and asked the chemist to create a batch of sauce from his recipe.