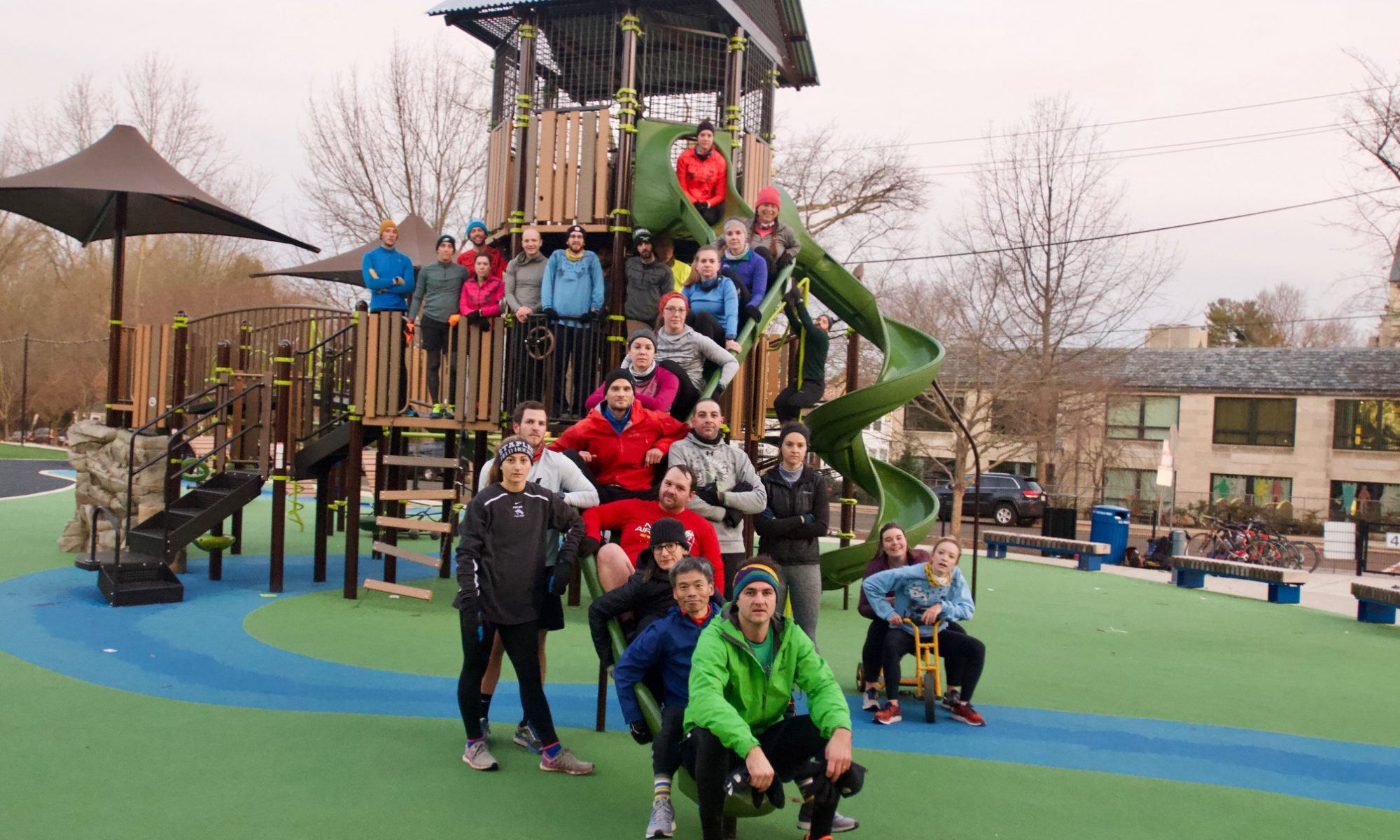 Last week to kick off the new year, we gave out the Positivity Award to Mike Deloge, a stalwart source of good vibes in the NP community. Without further ado, get to know Mike (and find him at your next workout).

How, when and where were you introduced to November Project?
In May of 2018 I went to bed one night thinking, “I should join a running group to stay motivated and keep active.” Whenever I’d thought about running groups in the DC area, though, I thought of some of my friends who are strong, fast runners — words that I would not use to describe myself in any way — and had been intimidated by even considering joining a running group for fear of not keeping up. The next day I woke up at 3:30 in the morning and, unable to fall back asleep, decided to run down to the Lincoln Memorial to watch the sun rise. Waiting to cross Constitution Avenue around 5:15 a.m., two young ladies — who later introduced themselves to me as Noli and Kate — asked me if I was going to NP and when I didn’t know what it was, they told me to join them and thought, “Well, why not?”

What do you remember about your first workout or thinking at/after your first workout?
Coming across NP randomly, I was caught off guard a bit by a few of the rituals of the workout: the bounce, the hugs and high fives, etc. I was starting to wonder what I wandered into but decided to step out of my comfort zone a bit and to just go with it, especially since only a few hours earlier I had been thinking about how I needed an active community in my life. And it really made an impression on me how people asked my name and not in a “what do you do / who do you work for?” networking context. Just genuinely wanting to know my name, followed by a “I’m glad you’re here” in DC of all places! It was really refreshing.

That was the May PR Day and I was glowing (and exhausted!) the rest of the day after the workout, thinking ,”What the heck just happened??” It took me a few months until I started showing up regularly, but I can honestly say that one day changed so much of my experience of living in DC, and only in positive ways.

What motivates you to keep you coming back?
Starting the day off in a healthy way with so many positive, genuinely wonderful and encouraging human beings. It’s just such a fantastic group of people to start the morning with and gets my day going on a positive note. Everyone is so supportive, and not just during the workouts. There are people at NP that have been there for me outside of workouts when I’ve needed someone to talk to, or a hug, or just a friendly face. It’s made me a more positive person and more understanding and accepting, not just with others, but with myself too.

What does winning the Positivity Award mean and represent to you?
It’s really an honor. Heck, it’s an honor even just to think of me being considered for the PA! When I think of the people I have seen win it during my time in NP, they’re just fantastic, awesome people that always bring something positive at every interaction I have with them, whether it’s just passing by each other during a workout or a longer conversation over post-workout coffee. I don’t know if I do that, per se, but it means a lot to be asked to watch over the DC PA oar handle for a bit.

Describe for us your favorite November Project moment to date.
Some of my favorite times are the ones where we live up to being #weatherproof. There was one last year when it was snowing down at Lincoln and I rode my bike there and back in a lot of slush and there was no one else on the road on the way back, except for the occasional bus. All I could think of for the rest of the day was how cool it was that this group got together no matter the conditions outside. There have been times when I’ve looked out the window in the morning and not been looking forward to a workout, but it’s so great to not have to wonder, “Is the workout still on? Will it be delayed?” Those aren’t ever questions I need to consider, and it really removes a lot of barriers that otherwise might keep me from showing up. I know it could be pouring rain, or snowing, or super cold, but others will always be there. And if they’re not letting the elements keep them away, why should I?

What’s your favorite NP workout?
This is a hard one! I love the first Monday of each month when we have the guest leaders — it’s always a fun surprise to see what they come up with (shoutout to Alex and Shannon for the animal-themed workout this morning! That was fun, and a great mix of activities!). Wednesdays, well, what a treat to workout in such a cool location and to see those sunrises! And Fridays, I always appreciate seeing a new part of DC, even when it involves some extra planning to get to — always neat to see different neighborhoods and go to new coffee shops that I don’t think I would get to on my own.

What’s your favorite DC-area race and why?
I haven’t done a lot of the area races because, honestly, I haven’t considered myself a runner until recently. The North Face Endurance Challenge 50K was fun last year. I’m looking forward to the Cherry Blossom 10-miler this year, even if it means going at a snail’s pace after a trail run the previous day.

Any New Year’s resolutions for 2020?
I’m trying to listen to an album by an artist/band from a different country each week, preferable someone I’ve never heard of. This past week I listened to a super fun album by George Maluleke Navanwanati Sisters, whom I believe are from South Africa. The album is Ni Hava Dyondzo No. 11. Check it out and let’s get George and the Sisters on the Spotify charts! Next up is an Icelandic rapper who is cousins with my friend. It’s a fun resolution. I’m open to any suggestions!

What’s the one DC restaurant or bar you haven’t been to but want to check out?
I’m not too up to speed on the dining scene, but I believe the folks who run the Georgian (country) restaurant Supra are supposed to be opening a more casual restaurant in Park View focusing on khatchpuri, Georgian cheesy bread that is amazing, and khinkali, Georgian dumplings. I can’t wait for that to open! I had the pleasure of spending six months in the Republic of Georgia on a short-term Peace Corps project, so I’m stoked to have access to some Georgian eats in a more casual setting.

You’re stuck in a metro car for 4 hours with just the podcast app and headphones. What pod are you listening to?
Planet Money. I love how they dig up interesting stories, especially the ones that make me think about a piece of our financial/political/social structure I’ve never considered before.