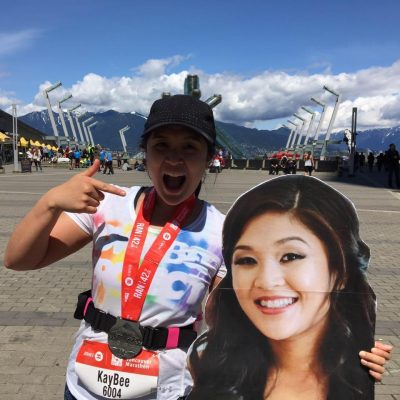 The right place to start my story is by telling you a fact: #Angelface (Angel Barron to the outside world) is my brother. By the time he came for a long overdue visit to Vancouver in April 2015, he’d been going to the LAX tribe for awhile. I remember looking at photos from his workouts and thinking “Hm, that looks fun,” but in hindsight, I really had no clue what his “fun workout group” was really all about.

And then came Angel’s seemingly innocent suggestion to run the stairs at Jack Poole Plaza at 6:29am on a Wednesday while he was in town.

Crazy talk. Wasn’t this supposed to be a vacation?! But since my bro and I live on opposite ends of the West Coast and see each other fewer times than I’d like, I got up at the ungodly hour and went to indulge him in waking up the sun.

Okay, fine. Truthfully, I hit snooze more than once and showed up late.

By the time I got there, he and his friend Casey (also from LAX) were already gone. Thinking he was halfway down the seawall by now – did I mention he has an inhuman amount of energy at all hours of the day? – I walked further and instead found him and Casey with more crazies — I mean, people — who were also ready to run the stairs. The man leading the group was Graham Snowden.

Coincidentally, he and a bunch of friends did weekly workouts here inspired by the November Project movement. I almost died by the time I finished the last set, but couldn’t stop talking about all the hugs I got and all the fun I had for days afterwards. I was finally starting to understand my brother’s obsession with NP.

After this fateful visit, Graham and Richard began pledging our tribe. A few months later, November Project Vancouver was born and I was getting my first shirt tagged with Paul the Lion emblazoned proudly on it.

What turned into a one-time thing to make my brother happy has turned into a weekly lovefest for me. I now willingly get up at that insane magic hour to get high on endorphins and hugs with some of the most inspiring, good-natured, and fun people I know. This tribe reminds me to always try to bring more positivity and joy into every single interaction I have with others – whether it’s hips-in-hugging my loved ones, high fiving strangers on the seawall, or giving positive comments to that customer service agent when I’m trying to lower my cable bill.

Okay, that one is a lie, but I swear, through gritted teeth, I try.

I read somewhere that when you smile through the challenging parts of a workout, it does something to your brain chemistry where you feel a little less pain as you attempt to conquer your limits. The idea is that it’s hard not to feel good when you’re smiling (try it next time, I swear it works!). I also believe that when you see a smile on other people’s faces, it not only gives you that same anesthetic effect, but also doubles, triples and even quadruples in potency depending on the size of the horde laughing and cheering as they run towards you.

If you’ve ever tried to describe November Project to an “outsider,” you’ve likely resorted to using as many positive-sounding adjectives as possible in a single breath to explain this effect. It’s that feeling of awesomeness you get from smiling because you can’t help but do it as everyone around you dishes out high fives, “I’m glad your here’s!”, and sometimes scary-sounding roars of encouragement (oh, just a Vancouver thing?). It’s likely why you tend to remember how amazing NP made you feel for the rest of the day instead of how hard the workout was.

Summit is basically THAT feeling times a hundred and increasing tenfold over 3-4 days and lasting for as long as your ability to retain long-term memories remains functioning.

Yes, we ran a crazy amount of stairs. Yes, there was a day of trail racing and trying not to faceplant in the dirt and groaning as you ascended a never-ending river of rocks. But all that was such a small, secondary part of being at #5UMMIT.

What I remember is the booming way hundreds of voices echoed in Harvard Stadium after yelling “Fuck Yeah!” in unison. What I remember is searching endlessly for a breakfast place that could fit 15-20 people afterwards, but not minding so much that I was hungry and tired because I was excitedly getting to know new friends from LAX and Virginia Beach and many other places I hope to #traverbal soon. And yes, I remember running that really technical trail alongside people who, like me, weren’t going for time, but rather came to have fun, try a new challenge, and meet people from all over the world.

We made the hard parts easier together, and guess what? So many of us were smiling from ear-to-ear while doing it.

So if you’ve never been to November Project, it’s time to go out and look for us. A tribe is ready for you. #justshowup.”

It’s not just a workout. It’s not just a bunch of yahoo’s running around a park screaming and giving each other high fives. This is good for you! This crazy community of people who embrace you immediately, no judgement; who wonder where you are if don’t show up. We are genuinely glad you are here with us. Sure, there’s some fitness thrown into the mix, but this is so much more than that. It’s the best thing you’ll do all week… SEE YOU WEDNESDAY MORNING!!