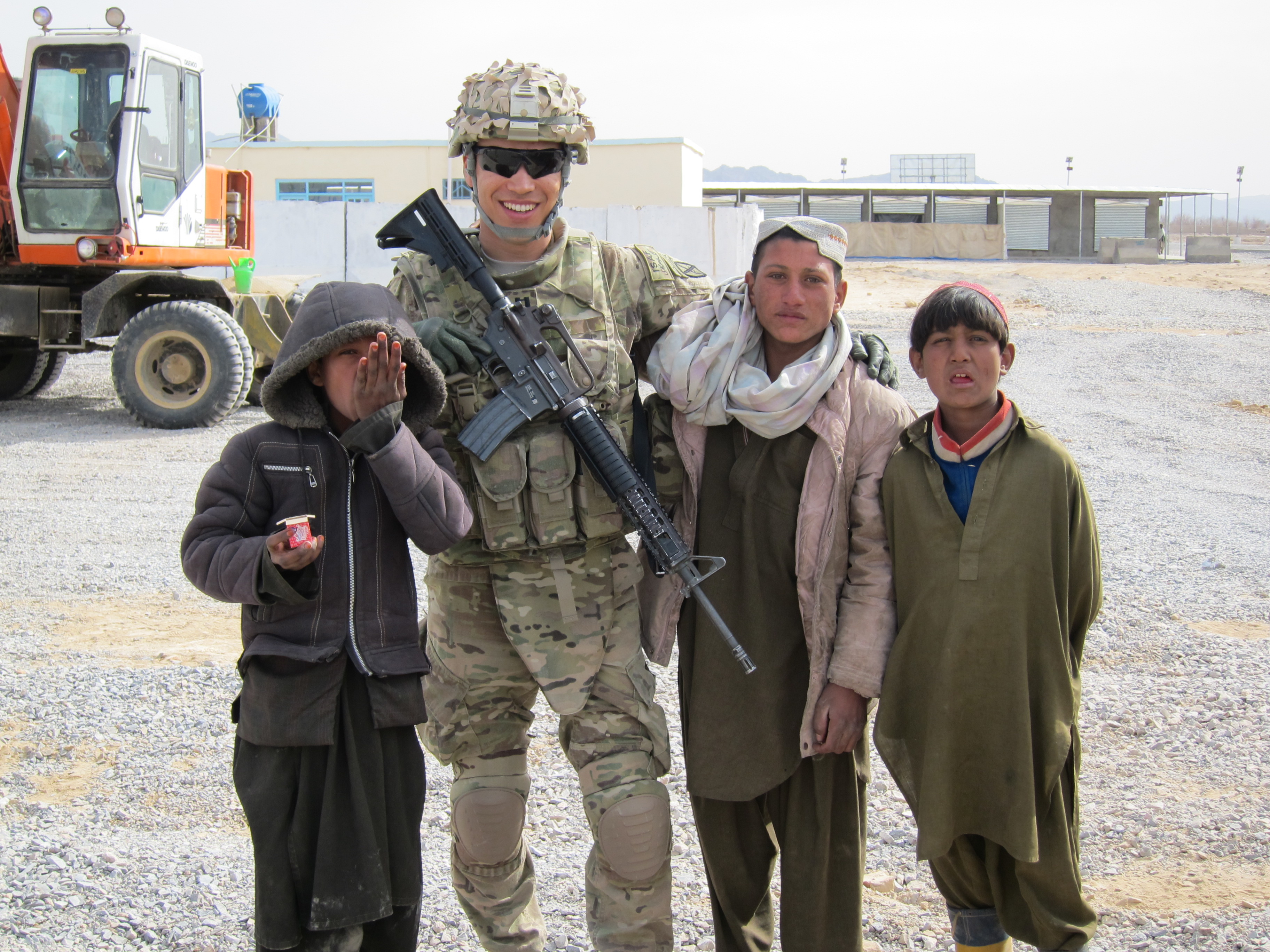 Andrew Hutchinson has been one of the most consistent members of the San Francisco tribe over the past few months. He greets you with a warm smile, a comforting hug, and then absolutely destroys you on hill repeats. But Andrew is much more than a fast runner. He exemplifies everything we love about November Project. As a West Point graduate and Afghanistan veteran, Andrew is now working full time with Red, White and Blue in San Francisco, a non-profit aimed at enriching the lives of America’s veterans by connecting them to their community through physical and social activity. Working together with Andrew to build this community has been an honor and I look forward to many more opportunities to combine these amazing groups. So without further adieu, here is Andrew Hutchinson, recipient of this week’s positivity award:

Legs burning and heart pounding, I cover the last few feet to the top of the hill. Waiting for me, on either side, is my November Project Tribe. They shout my name and give me high fives as I crest the hill, chest heaving. Bending over, I place my hands on my knees and catch my breath. As I look up, the sun has just finished cresting above the horizon, casting a beautiful orange glow across the whole city that is laid out so brilliantly before me. As I slowly rise and soak it all in, calmness sets over me and makes me smile.

I can’t help but think that at this very moment, there is nowhere else I’d rather be.

It’s amazing how quickly things can change. Last year at this time I was a Captain in the Army, living in Upstate New York and training up for deployment. Two years ago, I was finishing up a tour in Afghanistan. Change and transition have always been a big part of my life—Texas, California, Alaska, and the United Arab Emirates were all places that I lived growing up. My nearly 8 years in the Army saw even more change and transition as I lived in 6 different states, and deployed to both Iraq and Afghanistan. The positive side of living in so many different locations was the chance to see new things, and meet new people. Transition however, often doesn’t allow you to develop meaningful and lasting relationships with people, to get immersed in the place you live and to build community. Always deployed, training, or getting stationed at a new base, I never had a chance to get plugged into the place I was living, or to feel like I belonged.

October 2012. I had just recently left North Carolina for my new duty assignment at Fort Drum in Upstate New York. The unit I was joining was already in Afghanistan—after a month of training, I was slated to join them. My first weekend in NY, I was suddenly overwhelmed by a wave of sadness and a feelings of loneliness. I jumped in my car and drove 5 hours to New York City because I didn’t want to be alone.

And there, in the middle of Times Square, surrounded by millions of people, I cried.

I have long struggled with bouts of sadness. Sadness that can suddenly overtake me for no apparent reason. People are always surprised when they hear this. “But you went to West Point,” the say. “Weren’t you in the Army?” As the 2nd oldest of 8 kids, and as an Army Officer, there was always a high level of responsibility resting on my shoulders. I never wanted to appear like I didn’t have control—I wanted to be strong.  I resisted admitting I had any kind of problem, or seeking any help for it. My best friend finally convinced me to talk with a counselor. I came to realize it wasn’t weakness—we all have issues that we deal with in our lives, and the folly lies in not seeking help.

I discovered through the years that running helps me with my sadness. My mind always seems to clear after charging up a mountain, or running fast and hard until my legs ache and my lungs burn. Running, as wonderful as it is in the moment though, is usually always just a temporary fix for my sadness. The Army forced me to me display the personality of an extrovert at times, but deep down, I am a textbook introvert.  I don’t like large parties or big crowds. I prefer deep, meaningful conversations over small talk. So even as I was seeking the comfort of running, I did it alone. Outside of the Army, I always ran alone. I would go to local races alone and not talk to anybody else. I’d show up, race, and then leave—usually not sticking around for the awards ceremony, even if I’d won.

What I often needed most in my life—other people and community, was something that I shunned all too often.

I got my first glimpse of the power of community and its healing effects on me while living most recently in Syracuse, NY. I spent a year and a half there—one of the longest times I’ve ever been in one place. I joined CrossFit Syracuse and loved it. The workouts were great, but the reason I would drive an hour and half straight there from work was for the people. They became like family. There was something special about the bonds created with a person that you struggled through a workout with. I also joined Team Red, White and Blue and the local Syracuse chapter. The mission of Team Red, White and Blue is to enrich the lives of America’s veterans by connecting them to their community though physical and social activity (www.teamrwb.org). I started running and doing athletic events with them instead of just on my own. It felt good to belong to a Team and to know that others were there for me. It felt good to help others that were struggling.

I found that by helping others, by motivating them, by making them feel like they belonged, that I focused less on myself and my sadness.

Fast forward to September 1st, 2014. After spending a week driving across the country from NY, I finally arrived in San Francisco. After leaving the Army last summer, I took a full time job with Team Red, White and Blue, organizing Athletic Camps for veterans all across the country.

I am used to change, but my arrival to San Francisco was some of the most change I have gone through.

Since going to West Point at the age of 17, the Army is all I’ve known the past 11 years. I’m used to living in small military towns. San Francisco is big and fast paced, and it’s certainly not the Army and what I am used to. With my new job, I found myself on the road 50% of the time. There was no established Team Red, White and Blue chapter in San Francisco when I arrived, so I didn’t have a group to get plugged into. So while I was busy helping veterans all across the country, I didn’t have anything local to help me get connected. Three months into my time in San Francisco, I still felt like an outsider. Working from home, I hadn’t really made any friends, and I felt out of place. Through Team Red, White and Blue, I was helping other veterans make the transition from military to civilian life—But I was struggling a little bit myself. The sadness started to set in again.

And then I discovered the November Project.

Seeking community, I join a group run one Wednesday evening at lululemon, and start chatting with Laura Christine. When she found out that I work for Team Red, White and Blue, and that I like to run and workout, she recommended that I try out November Project. I’ve heard of some of these fitness groups before, and am a little wary. But it’s free, so I figure I’ll check it out.

My first workout was on January 8th, 2014, and it was unlike anything I had experienced. It was 6:28 in the morning, and everyone was laughing, smiling, and hugging each other. And there were over 100 people there—the energy was incredible! Nobody shook my hand—they all gave me hugs instead and treated me like a friend. Not just a quick hug either. They lingered, as if to say, “Hey, I’m glad you’re here.”  Everyone I met was so welcoming and inviting. And everyone in the group seemed like they were family. It was amazing. This was just what I had been looking for.

I haven’t missed a Wednesday or Friday workout since then.

I eagerly look forward to Wednesday and Friday mornings now. It makes my week. I make a huge effort each workout to try and motivate and encourage others—to make them feel welcome, to make them feel like they matter. Everybody needs community, and I want to be a part of making a positive impact in people’s lives.

I’m inspired to do this by so many people that are a part of the Tribe.

Sam Livermore…her sincere enthusiasm and love of life is addicting, and she has the ability to encourage and motivate anyone. Every time she sees you, she greets you with a huge embrace and smile—as if you are her best friend who has just returned from a long absence. And she always uses your first name. There is a certain beauty in hearing someone say your name—sometimes it’s the simplest things that have the biggest impact.

Jorge Moreno…his athleticism can’t be denied. He manages to sprint up hills every Friday morning, even after biking all the way from the East Bay. Even as athletic as Jorge is though, it doesn’t match his ability to connect with people. Jorge has the ability to make you feel welcome, to make you feel comfortable—you know when you talk to him that he sincerely cares. After missing an event he committed to verbally, he called me to apologize for being absent. You don’t see that too often these days.

Lillian Christina…a bundle of energy, smiles, and kind words. Last weekend during a hiking trip that was planned for the group, she hugged and thanked me no less than 4 times for organizing the event. Her warmth and compassion is real, and it’s a breath of fresh air. You can’t help but feel better about yourself after crossing paths with her.

I tell everyone I know about November Project, and try to get them to join. I know that if they just come once, they’ll be hooked. I’ve gotten other veterans from Team Red, White and Blue to join, and I love the support that November Project has shown them. I don’t start off by telling people about the fitness aspect of it—I tell them first about the amazing people and the awesome community. We also just happen to like to sweat and get after it. I tell them about the effect it has had on me, and how it has made me feel like I belong. Once you join the Tribe, this amazing community, you become family.

It’s all about community, and we all need it. It’s about connecting with people in a way that is sincere and real. Supporting and encouraging them, motivating them, keeping them accountable, helping them to be better than they were the day before. A simple kind word, a lingering hug, taking an extra moment to ask someone how they are doing. November Project and community. It’s powerful and it’s real.

And it’s a beautiful thing.