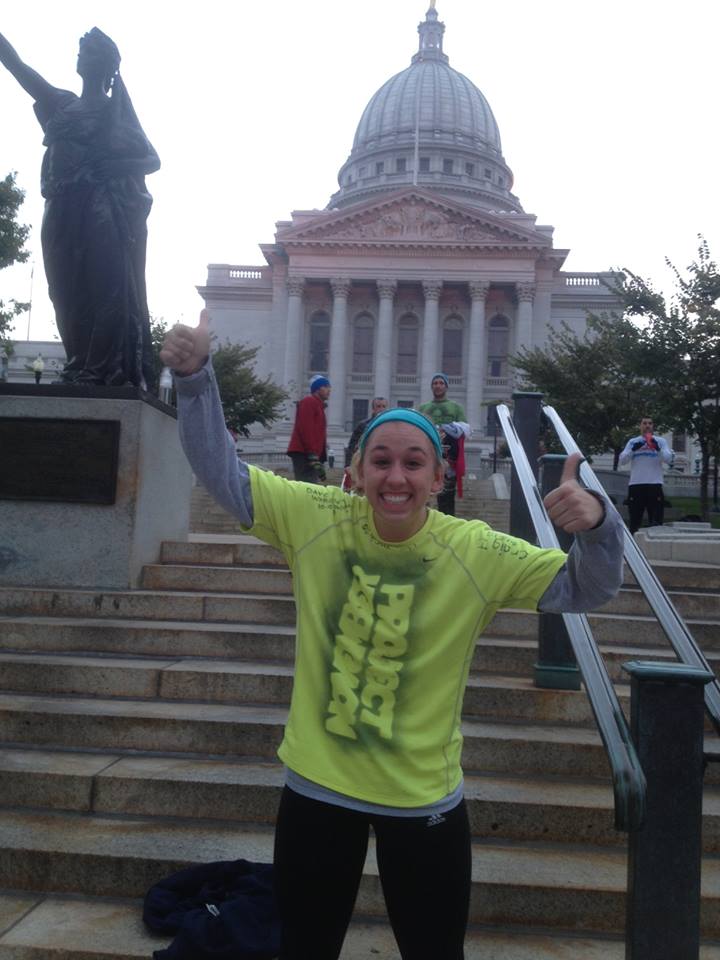 It was Saturday morning and my alarm awoke me at 5:05 a.m. and that there begun a 6 day adventure that would entail much more than beers, confusing metro systems and 15 hour driving dance parties. That 6-day excursion brought us 100 new friends, 3 different tribes and a fresh born belief of just what November Project love can entail. Love that pertains way before the vocal straining scream of “GOOD MORNING!”

November Project love means sweaty hugs with strangers. November Project love means tickles behind ears and swipes of butts – gyrations and hips moving forward whilst hugging. Falls on pavement because I can’t seem to laugh and workout at the same time. Loud farts during abs and everyone take blame. Despite what I just described: No, November Project is not college students in a dark corner of a bar (or you after your senior year prom). We do weird things and we are all weird, and in the words of BG, it IS a love fest. With webs of smiles, freakishly soothing loud voices at 6 a.m. and the coolest
people I’ll ever meet in my life, it’s a movement that affects my entire day – my entire person, bloody knees and all.

I say it’s taking over a community. We say it’s taking over the world. You start to believe everything that the NP leaders say. Especially after they shove unicorn-like endorphins into you before sunrise. So when BG and Bojan promise a world take over, I’m here fellas – tickle my ears and have at it – I fucking believe you. But then again, I’ll also believe you when you point to my shirt and tell me I have a stain. But when I LOOK for the stain, you assholes flick me in the nose. For the first time since my NP adventure started last May, I was able to test this world-take-over-thing I believe in and LOOK to the other tribes. I come from the MSN tribe. I’ve had the joys of emerging myself with the MKE tribe. And for my last spring break as a college student, I chose to visit Washington D.C. – and there met an elbow high-fiving, hip thrusting, fucking insane tribe.

Because just as the Kennedys and the Brady Bunch, the tribes are family – and the tribes are taking over the world. I can attest. Even to the unicorns.

I consider the MSN tribe to be my immediate family. The people that I consider to be better than Beyonce and make me forget the Kardashians exist. I come from the tribe that was once led by DG. (History lesson, woot woot: DG fell in love. That said love (we love you Meggie) only cleans teeth in Milwaukee. Cue move to Milwaukee. Cue Teddy Testosterone and Pork Bauch emerging from the unicorns and becoming fearless leaders. Yeah like emerging from within the unicorns. Sure.) While the MSN tribe cannot vocalize how much we miss DG’s overuse of hand gestures at the toes of Abe and the steps of the capitol, the emergence of the MKE tribe meant only one (or two) things for MSN: the yellow lines of I-94 just got a little brighter at 4 a.m. and the 90 mile playlist will be loud. The travel will easier than it ever has ever before, because the travel is met with love. It meant opening arms to a new city and new slew of crazy people, without a doubt of their goodness.

I started my spring break adventure, appropriately waking up before sunrise and traveling 90 miles with THIS (shout out to Ashtin of MSN for this jam) on repeat – to be with my MSN tribe, by the side of the MKE tribe. There was spray paint, jorts, fannie packs, a boy Schwabe fucking up the course of our race. There were beers, laughs, less gyrations and zero (yeah right) farts. But there was NP love and the two tribes became family, for not what was the first time. The love emerged when we saw the first blurry picture of the new tribe on the first pledge work out. Because that’s what November Project love is: loving people you’ve yet to hug.

Then came tribe number 3 that I was part of in 6 days. It’s the Holy Grail to my attest. And it was a love fest (I JUST RHYMED).

We sat in a car for 15 hours. We played Bauch music and we rolled into a gas station with 0 miles of gas left. This is the way Amanda Ellmaker and I travel. Selfie videos and all. Chaos. As one of my best friends, and fellow avid November Project MSN go-ers, the tribe didn’t think we would survive. We didn’t even think we were going to survive. Turns out, we did survive. But we did about everything wrong we possibly could have in D.C.: stood on the wrong side of the escalator, got toppled over by crazed politicians, didn’t stand back far enough while getting on the metro, drank coffee on said metro, etc. for seriously ever. But we did one thing right: we just showed up to November Project D.C. – we gave our verbal’s and DG sent over our “Sunday morning post Saturday flip cup” mug shots. Everything was routine. Everything was greatly weird.

After what was two days of exploring the city (aka being barged into on the metros. Getting lost. Being too loud in the Library of Congress) it was finally Wednesday, 6:20 a.m. and we are shuffling our way to the steps of where a much larger, and much more serious looking Abe sat. The space between our steps widened as we began to hear voices. Our people, our people – our people are up there. We picked up a jog as we saw silhouettes of bodies, plastered with bright colors with what we mirrored as smiles. Everybody is hugging. And everybody is laughing. My feet started to tingle. I grasped Amanda’s shoulders and begin to shake her, WE WERE SO EXCITED. Because holy shit. This is it. This is the world take over. We quickly scurry about the large mass of happy fucking people, to finally find whom we think is Danny. I scream “GOOD MORNING” in said Danny-like-looking-persons-face. And a sudden “HOLY SHIT THE MADISON GIRLS” opened up into a three-person hug, and that right there: November Project love. My favorite part about this: I never met the dude, I only exchanged a few texts, and there we were, all embraced and loving and unicorns and shit – but that’s exactly what I expected. Because that’s what November Project love is.

Through the blur of burning legs, sweat dripping foreheads, and post-burpees-hand-bleeding-palms, we managed to hear a fellow tribe member belt out through his pounding heart rate, “this is only my second time here and I’m never going to miss one! November Project is giving me endorphins that keeps me going throughout the entire day!” It suddenly all became clear: this tribe is my family, and it brought me to the best people in this community.

Three tribes, six days. The world take over is not only believed, but it is seen. November Project D.C. makes welcoming people look easy, makes strangers feel at home in a completely foreign city; because that’s what DG, Ted, Pat, Danny and Steve and all the others leaders I’ve yet to meet fuel, and that’s what November Project fuels across the nation. Just yell. Hug. Sweat. Tickle Ears. Dance. Fall Down(dancing). Hug again. And believe it, party people.