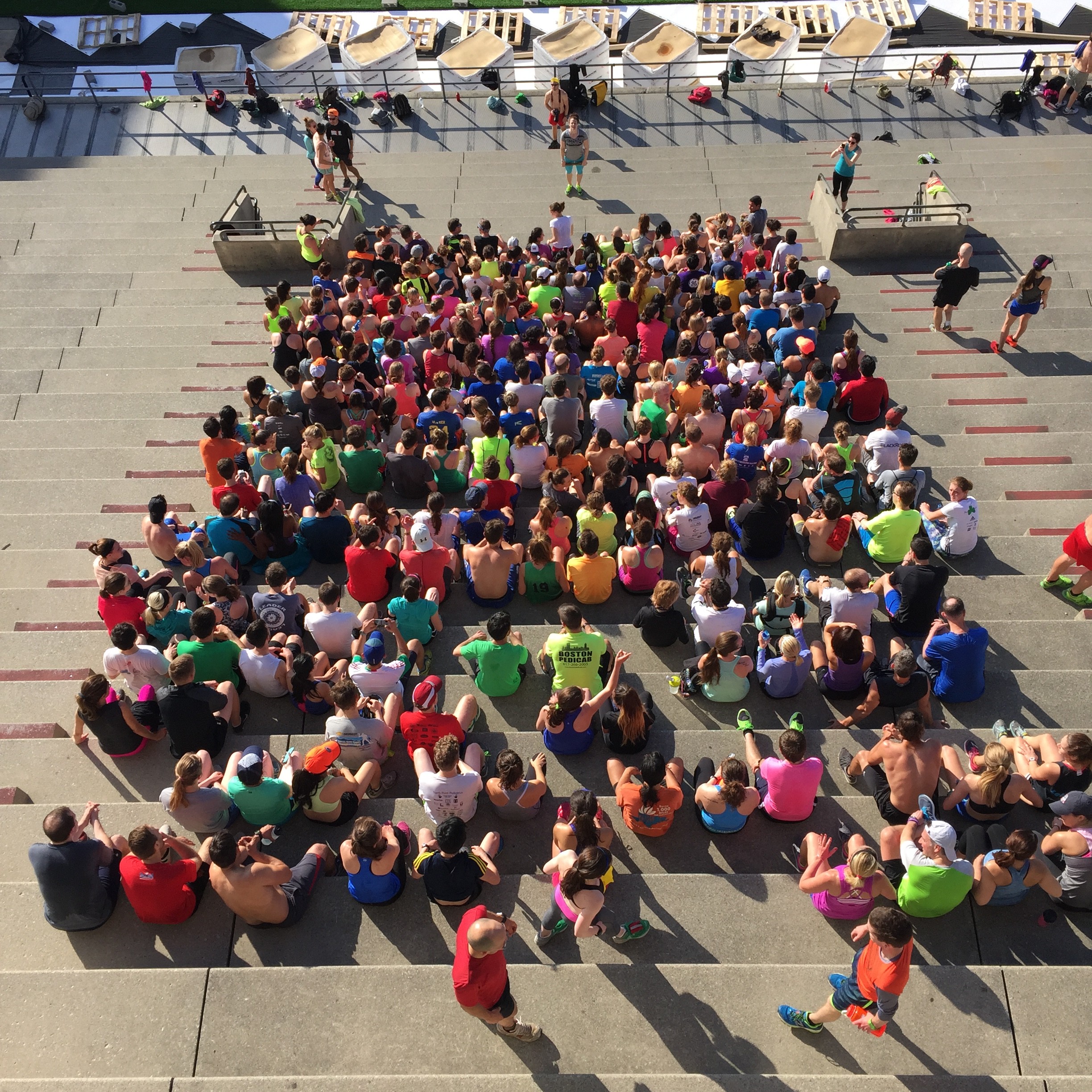 Y’all get on the train because it’s rolling, and the momentum is strong.  I mean it–get ON THE TRAIN, show up, get involved, keep coming, keep getting better because this shit is happening!  Every Wednesday I get reminded how big and powerful this is…and there’s no stopping the roll.

From the cozy hundred who showed up this morning for 5:30, to the masses who showed up at 6:30, there was some electricity in the stadium.  Roars of cheers from the Tribe, for the Tribe.  FIERCE racing. And I was really impressed and proud like a mom how many of you took to heart the challenge presented: to do as many sections as possible from the start to 22.5 min in, then attempt to return back to section 37 in the same amount of time.  The positivity was overflowing today, and I’m not going to lie, I left the stadium after being there for just over 2 hours feeling like I could leap over buildings, climb mountains, and do pretty much anything.  Wednesday mornings change me, every single week.  The Tribe was really strong today.  The tribe was utterly DIALED IN today.  I want to try to describe the feeling as I saw huge numbers of people ready to push themselves, set goals for their fitness accomplishments, tear up one more section, puke (and come back to keep going),  be here for the very first time, and verbal for next time. It was partly awesome and impressive, and in other ways it can’t be described.  Which is why we need to get on the train.  If you’re on it, stay on it.  If you’re sometimes on it–take a moment to reflect on how it feels when you’re with the Tribe and decide if you think life is really better half on?  JUMP ON people.  All the way on.

It’s just like I told my new friend Russ this morning.  He did NOT show up for November Project.  He was walking by me just as the 6:30 group was starting and I gave him a hug and said “I’m glad you’re here!”  His response was, “…um, thanks.  I’m not really here…for November Project.” Turns out, Russ runs the stadium on Tuesdays usually, but had to change his day.  He knows us.  He has true respect and admiration for the depth and duration of this NP movement.  We chatted about being an athlete who knows how badass he is, even if most of the time he just goes through life with people thinking he’s a good guy.  I described for him the way that the ENTIRE community of NP is motivating and inspiring.  He’s a guy who could run fast with the fast fuckers and maybe (finally) find a crew of peers to push him to be faster.  And he’s a guy who could realize the satisfaction that comes with knowing he inspires others with his _____ (speed, dedication, positive attitude, smile, abs, colorful clothes…) whatever others need, they can find it at NP.  And while you can show up on Tuesday and get a badass workout, then go about your day as a good guy who works hard early in the mornings, when you GET ON THE TRAIN you make yourself and everyone around you better.

Track your score from today.

NEXT WEDNESDAY be sure to carpool, walk, run, or ride your bike to the stadium. Or get on the train!! Harvard parking patrol is likely cracking down.  We don’t want to get tickets and way more importantly, we don’t want to piss off our friends and kind hosts at Harvard.  Do your part.

CALEB DANILOFF is authoring a book about November Project.  You’ll be able to read it soon.  He received the Positivity Award today.  We’re pretty happy he’s around.

One Reply to “Get on the train”