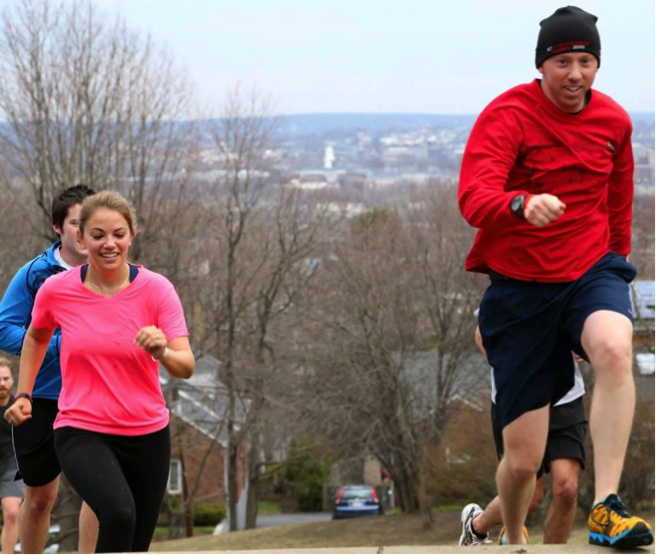 If you haven’t met Ryan Komaiko at this point, you haven’t been using those morning hugs and intros for their intended use. This dude is a soft spoken racer that comes up with brilliant ideas around the Boston Marathon. Recently he decided to share his story of how November Project helped him embrace Boston as his home away from home.

As I approach my 30th birthday next month, I’ve begun to reflect a bit on what has gotten me to this point, and January 15th, 2014 was probably one of the most important days of the last decade for me.

But before I get there, I need to set the scene, and take this story back to November 2011, when I took a job in the Boston area. This meant moving away from my family, friends, and known surroundings of New Jersey, and relocate to a city I knew nothing about and knew almost know one there. I made the choice for personal and professional reasons, and had hoped to push myself out of my comfort zone.

I moved into my apartment in early January 2012. I quickly learned it was almost impossible to make friends when it’s 20 degrees outside. I began to immediately doubt if this was the right decision.

Flash forward to April 2013. One of my sisters and my father had come into town to watch their first Boston Marathon. We had been standing on Commonwealth Ave, at the top of the Mass Ave underpass, right before the turn onto Hereford for the better part of the day. We had left just after 2pm to get lunch. It was a great day… until 2:49pm. This moment is the exact point I began to fall into a deep “mental funk” that would grow over the next nine months.

As I sat on my couch that Monday evening, I could say nothing. At that moment, I was unsure what was to come, if I would stay in Boston, or if my dream of running the Boston Marathon was over. For the next several weeks I found myself going to Boylston every day to pay respect at the makeshift memorials and be around other people. One of the events I ended up at was the One Run Boston final mile on May 25th. This was my introduction to November Project, but I wouldn’t realize it at the time.

I remember seeing people with spray painted shirts and jackets, and thinking how bizarre that was. I was speaking to someone in a yellow marathon volunteer jacket with the tag on it, and I didn’t really understand exactly what they were trying to sell. “You run stairs at Harvard Stadium? I’m a runner, I would never do that!” I said to them. I moved on from that moment not to think of November Project again. The rest of 2013 was filled with highs and lows. I fell into the worst of my “funk” while back in NJ for the holidays. I became homesick and was completely ready to give up on Boston. I contemplated what I would be giving up if I just decided to up and quit, and move back home.

I soon came to the realization that giving up wasn’t an option. I returned to Boston the next day, resolved to be better. It didn’t work. I continued to struggle with my place in the world, and what I was doing with my life. I lacked the support around me to really want to change.

As luck would have it, one day the following week, while running my zillionth treadmill workout of the winter, there happened to be a copy of the December 2013 Runner’s World on the ground next to me. I had vaguely recognized the November Project tag on the shirt of one of the runners on the cover from the prior May encounter. I ended up “borrowing” the magazine and bringing it home. I read the article, still wasn’t completely sure what this whole community thing was all about, but committed to checking it out once. I mean if it’s in a reputable magazine like Runner’s World, maybe it isn’t so bad!

I showed up the following Wednesday on January 15th at Harvard Stadium at 6:25 in the morning. I rarely got out of bed before 7:45, and for this I was up at 5:30 to run stairs in 20 degree weather?!? I was already turned off to the whole idea, but continued on for the purposes of at least saying to myself “I tried it, but it wasn’t for me”.

I proceeded to bounce for the first time, awkwardly hugged a few strangers with my crotch pointed out, and then went to the newbie meeting. I, like so many other newbies, didn’t heed the warning to take it somewhat easy the first day and I bonked, big time. I was shocked. Here I was, in what I thought was good shape, and I was getting whooped by young and old, tall and short alike. But it was memorable, and as I sat for the group photo, I began to understand that this was what I needed two years ago. This is how you make friends in 20 degree weather in Boston in January!

See six months ago this past week is the exact moment my life took a turn for the better. It hasn’t just made me physically stronger, but it has made me mentally stronger. My whole philosophy has changed because of November Project. I no longer say no, or I can’t to ideas. I push myself to get out of my comfort zone, and most importantly, I #justshowup every week. I never know exactly what the day’s workout will entail, but I know along the way, I’ve gained a collection of me doing absolutely ridiculous things at 6:45 in the morning. And I love every one of them:

To my tribe mates (and BG & Bojan in particular), I say thank you! The tribe makes my life better and encourages me to make others’ lives better as well. I find myself doing this bizarre thing when I see strangers on the street. I smile at them, and I don’t really know why, it just feels right now.

I often catch myself telling to people I wish I had found November Project sooner. But I can’t change my start date. So if you are reading this, and haven’t joined us yet, I ask why not? Make this coming week be that moment for you, where your life gets even better. #justshowup!

One Reply to “From Mental Funk to Cartwheels”