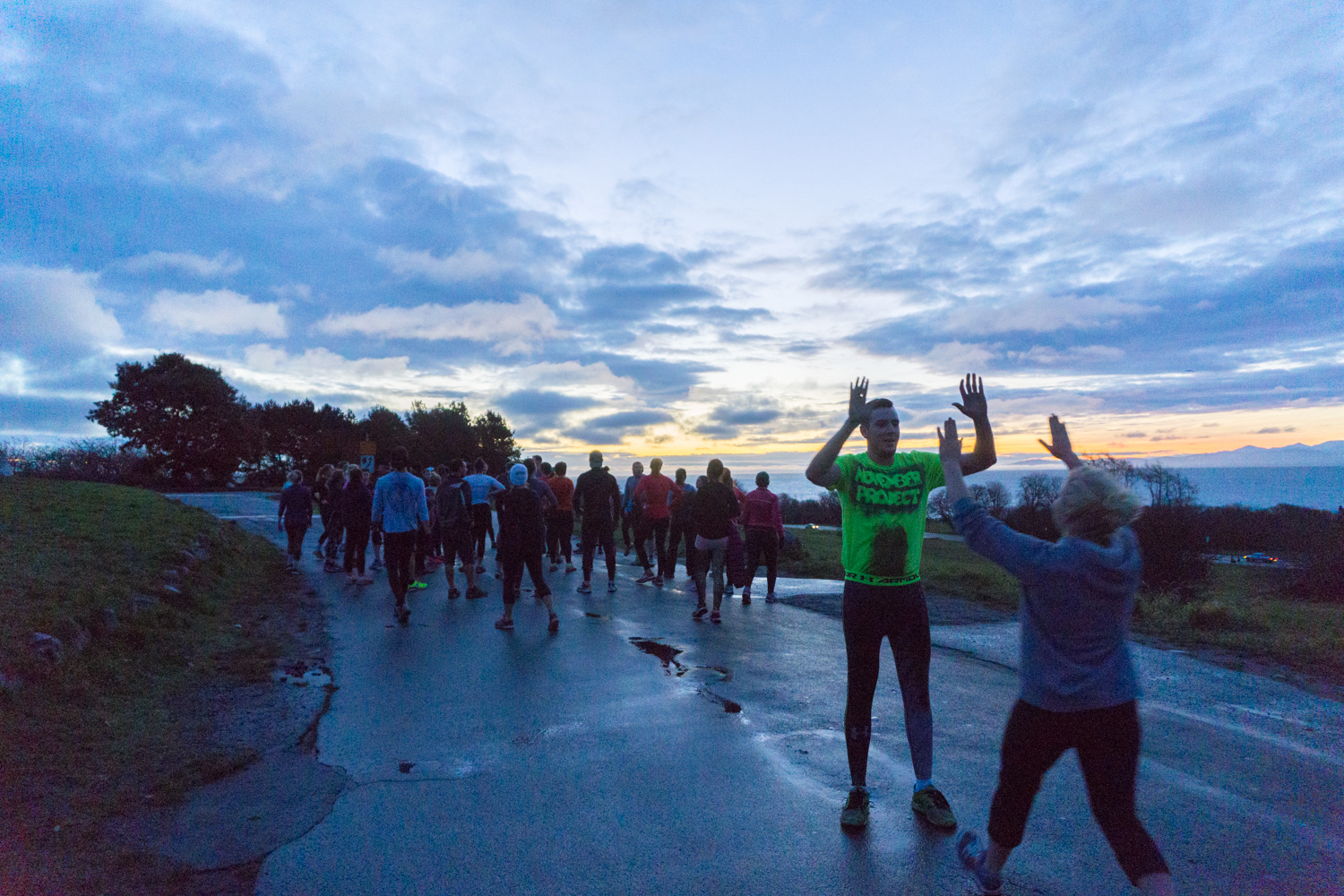 When your hill is long /
And the fight, the fight is yours alone /
When you’re sure you’ve had enough /
Of this rep, well hang on

A buddy of mine has been taking a shit kicking lately. In the midst of that shitstorm, it was her birthday Wednesday. Birthdays deserve a least a how-do-you-do, if not a coffee or a breakfast, so I reached out the night before to check on her plans for the morning.

Her: “I was thinking of #justshowingup [yes, hashtags in texts – and no, she’d never before been to an NP workout]…but I’m not sure. I haven’t slept the past two nights. I’ll try to make it – I’ve been wanting to. I wanna be part of the tribe, so if not tomorrow, you’ll be seeing me.”

Me: “What happens if I *challenge* you to come tomorrow?”

Me: “Go to bed. Get up at 5:30. Make tea. I’ll pick you up at 6. Thereafter you will have the best fucking start to a birthday that zero money and next to no advance planning can buy you.”

Her: “If you are willing to come get me, you have my verbal [missed the tag this time].”

Me: “With fucking BELLS.”

Baller worked the hell out of us today. Lots of kickass partner work, pouring sweat while personal connections reigned down. Somewhere in the middle of it we were sprinting half-laps of a 300m loop, tagging our partner at the end of each half, for them to sprint the other half, repeat, repeat, repeat…I dunno for how long. Long enough that I couldn’t see. I was partnered with the dude who holds the Fastest Known Time (FKT) ever run for the tallest mountain on Vancouver Island (62km, more elevation gain than Everest Base Camp to Summit) – former high performance XC skier. Dude looked KNACKERED by the end. I looked around – EVERYONE was totally shagged. Because everyone had been working equally hard, expressing the fitness they possessed when they arrived to the fullest extent, no matter how much that starting fitness, building more. I pulled Brent (FKT Fella), Olivier (National University XC Running Champ) and Adam (Olympic Gold Medalist, Rowing) into the centre of the group. Asked ’em all how they felt. They felt EXACTLY the same as everyone standing around them. Wasted, flatted. And uplifted.

Everybody hurts. And working through it, together, every one of us is Victorious.

We all headed up the hill – at a jog, walk, or hobble – to salute the sunrise, as is our practice. Jeff was the GAP greeter at the top of the hill, handing out high fives. My buddy came walking up with David, who’s injured at the moment, but shows up every damn morning to cheer on and help out.

Somewhere along the way, between the Bells and the Sunrise, my buddy, who has some kind of effed reflux thing – which acts up, randomly, annoyingly, debilitatingly,  irrespective of exercise – was puking in the bushes. Her workout partner was there. Shannon was there. David was there. They formed a circle around my friend and lifted her up. “Don’t quit,” said David. “Not on your life,” said my friend. “Don’t not come back,” he said later, on the walk up the hill. “Don’t worry,” she replied. Jeff hit her with a high five. Olivier got the positivity award. The sun rose. The tribe walked back down the hill. My friend lingered a while.

Her arms went up in a V.

To me, later, over coffee, my friend looked across at me and said: “It’s real. That community is the real deal. It is a family.”

2 Replies to “Everybody Hurts (VIC)”