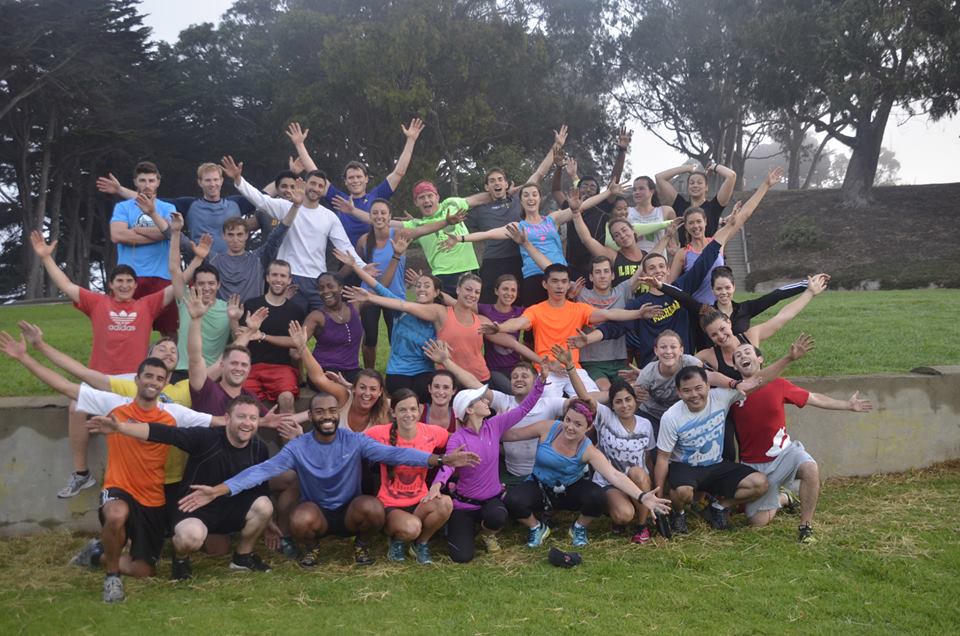 The fog stood thick like gluten-free pancake mix on the Fort Mason green this morning. It was 6:15am. There was a chill in the air that only San Franciscans are familiar with. That chill where it’s actually a reasonably warm 60 degrees, but you’ve been living on the west coast for too long and anything south of 75 is reason enough to call off the picnic. I stood there in the dark — playful Irishman to my left, damp turf below my feet. I could feel in my skin- nay, in my bones that something big was about to happen. Something… extraordinary.

The morning proceeded as usual. We bounced. We greeted each other with hugs and “good mornings.” We confirmed that the status of the masses was, in fact, emphatically good. It wasn’t until we introduced the newbies that we began to see what was happening…

There was a David, a Kristen, a Ben, but THEN!

What more, in store? Her last name? Sure!

An instant connection was made. You’re a Livermore!?! I’M A LIVERMORE!!! Sounds were made that only dogs could hear. And then, the inevitable occurred… they teamed up for a half hour of partner exercises.

I realize at this point that some of you might not know who Sam Livermore. Let me try to explain…

Does that explain it? Cool.

As per usual, I’ve blown this event completely out of proportion, but the Livermores did have a heck of a time this morning. At one point, where most tribe-members would be leaping into the air and yelling “Hoistee!” the Livermores started counting off  “One Cousins, Two Cousins, Three Cousins, FOUR COUSINS!” All this despite any actual relation.

Was anyone else at the workout this morning? Does it really matter? Sam Livermore found a new best friend.

Come join us THIS WEDNESDAY for the return of our triumphant leader, Laura, who will grace us with her presence once again. Those of you who were new last week, it’s time to make it a habit. 200+ is not a one time thing, it’s now the new norm, and it’s all thanks to you. Come out and kill it with us this Wednesday. #JUSTSHOWUP.

2 Replies to “Even More Livermore”