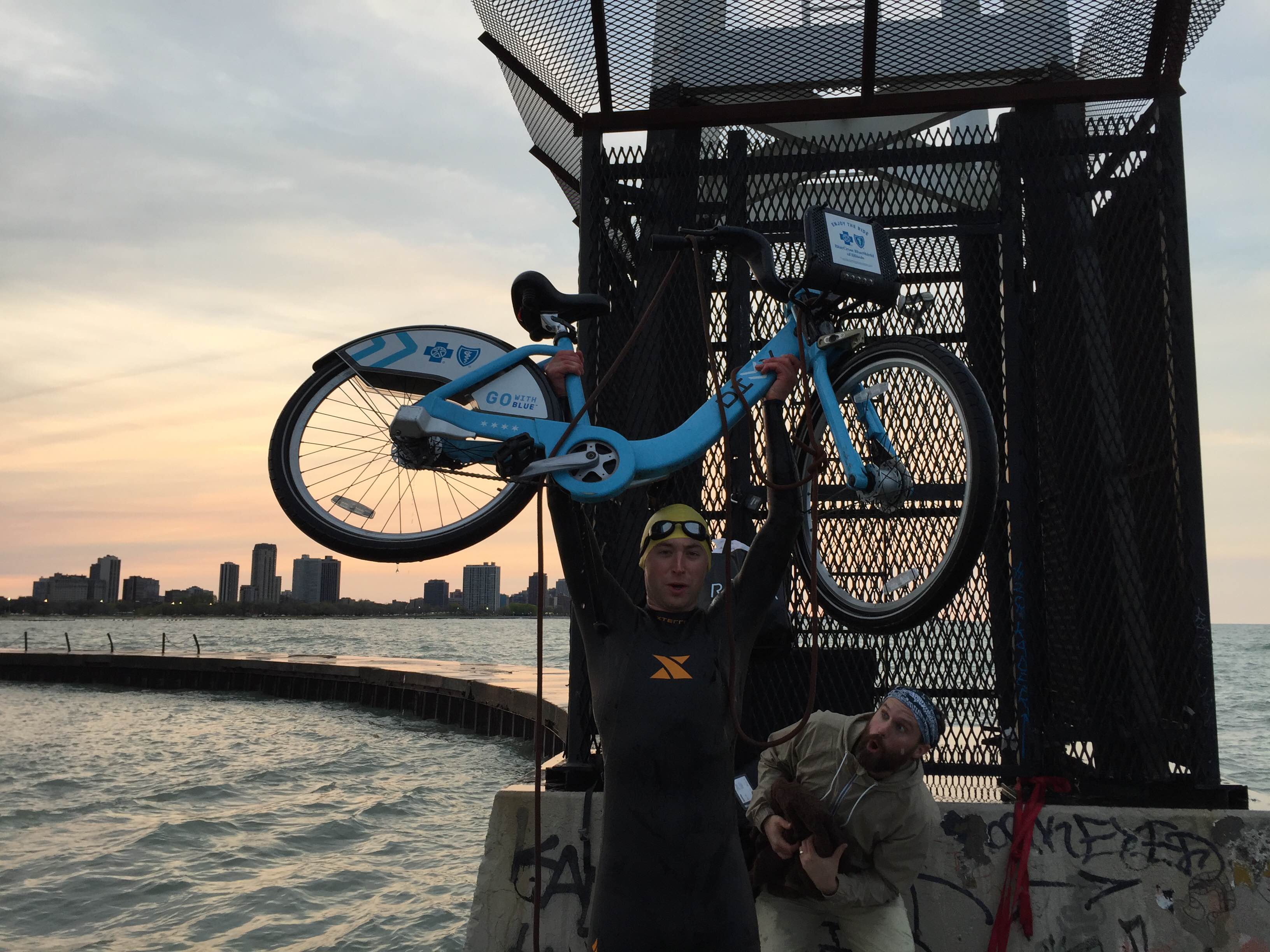 Today’s post brought to you in part by guest blogger Lauren Smith — a November Project Boston regular who stopped by Chicago this past week before she moves to DC for the next chapter of her life.

Strange events seem to follow me. A partial list includes: 1. Being questioned by the police at UConn freshman year, because they thought I was either an arsonist or that I was withholding information about said arsonist’s identity (I was innocent, but my family called me Sparky for the rest of the year) 2. Getting a concussion in college, not from playing on my school’s club soccer team, but by hitting my head on a concrete pole in my dorm’s lobby, in the midst of a dance party study break and 3. Joining this bizarre morning fitness cult group not because I read/heard about them in Runner’s World or through a friend, but because I met a dude returning from Burning Man in line for the bathroom on a flight from Phoenix to Boston (Hi, Malcolm Purinton!).

Taking all of that into account, I was outwardly a bit shocked, but inwardly not all that surprised as I watched my Divvy (Chicago’s bikeshare) bike sink to the bottom of Lake Michigan after being hit by a rogue wave. I was visiting the lovable NP Chicago tribe (they really are so nice, those Midwesterners) because I became close to them after sharing a house in Park City. Plus, their tribe’s leader, Brendan (now my knight in shining armor), is my friend from high school.

My trip had been awesome so far. I had just accepted a job offer and the weather was perfect. I watched Emily Rowlands run her first marathon in ridiculous 43 mph wind, went to a Cubs game (This is the year! Maybe), and attended my first Mountain Athletics workout run by Kevin (I’m still sore).

The only item left on my bucket list was seeing the famous Chicago skyline. Brendan said he knew the perfect spot, and while I know from high school that he is not always the king of brilliant decisions (example: on a cross country skiing trip in 10th grade, he decided to ski down a black diamond on his cross country skis and got a honestly well-deserved concussion), I trusted him. We biked out to the pier on North Avenue Beach and, sure enough, the view was great. The waves weren’t that high, but I did think to myself, “Heh, wouldn’t it be funny if we/our belongings fell in the lake?” ALWAYS TRUST YOUR INSTINCTS.

We took a bunch of photos for our respective dating apps (find us on Hinge, Bumble, etc, we’re single!) and were about to leave when Brendan yelled, “Ohhhh boy!” At that moment, a somewhat giant wave splashed over the pier and instead of sensibly grabbing the bike, I threw my hands in the air and screamed. The Divvy bike was carried into the water as I yelled “AH the bike! It’s on Emily’s account! Ahhhhh DAMMIT!”

I figured all hope was lost. I now owed Divvy $1200 for the bike. I decided maybe this was karma for talking so much shit to the NP Boston tribe (mostly Capozzi and CPayne) about my impending DC move. I’ll let Brendan describe his heroic and idiotic rescue mission, which, may I add, I forbade him from doing because I didn’t want him to die. I had a funny feeling once he put me on the train back to Emily’s that he wasn’t going to listen to me. Brendan has never shied away from a challenge.

Picking up where Lauren left off, the Divvy bike had just been swept off of the pier into the depths of Lake Michigan. After recovering from the initial shock of the wave crashing onto the pier, and then the second shock when she found out that it would cost $1,200 to replace the bike, the first words out of Lauren’s mouth were “I just… I don’t know what to do. I’m going to have to set up a GoFundMe page for this I think.” What a time to be alive when a GoFundMe page is a person’s first thought after a disaster like this strikes. A true #millenial.

Next, we talked about retrieving the bike by jumping into the water. Lauren’s common sense kicked in and so she was having none of it, but when a guest visits us in Chicago, we are going to do everything in our power to make sure they leave better off than they came — not $1,200 in the hole.

After passing Lauren off to Emily, I rallied to troops for a rescue mission. Andy, one of the other Chicago co-leaders, was at my apartment so he packed a duffel bag containing my wetsuit, goggles, and towels. Erin, who is always down for an adventure and has a car, picked Andy up and drove over to the lake. Meanwhile I went to Dan’s house — aka my personal REI — and picked up climbing ropes and carabiners. With the right gear and the right people, the fun could begin. The three of us headed out onto the pier, anchored the rope to a lighthouse/tower not too far from where the bike went in, and I prepared to jump into the water.

I jumped in, the water wasn’t as cold or as deep as I was expecting, and within minutes found the bike. I tied the rope around the handlebars, and Erin and Andy hauled it up onto the pier — an impressive feat considering the weight of those bikes… We returned the bike to the rack and let Lauren know of the successful rescue. She was happy.

Reflecting on this whole incident, there are few takeaways worth mentioning:

One Reply to “Divvy Bike takes a Swim”