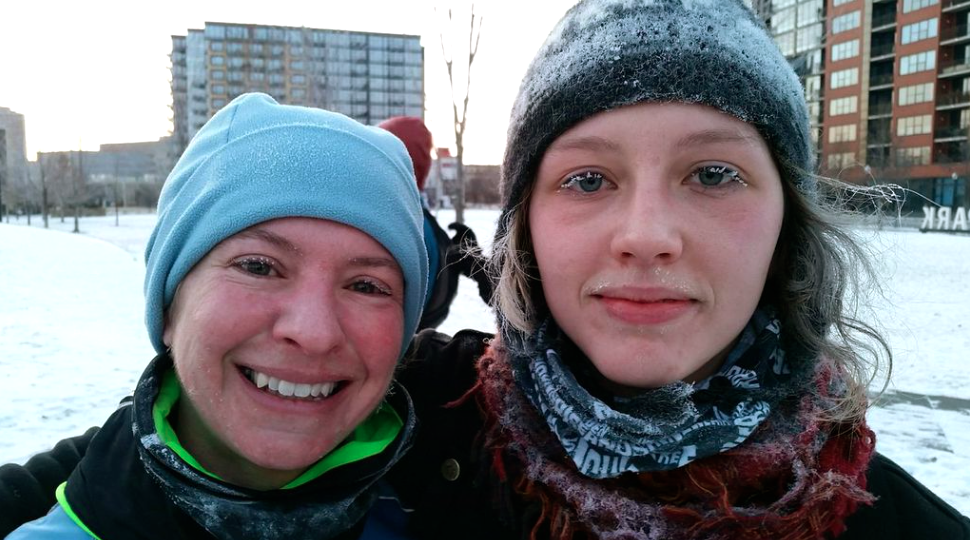 Despite some serious buff struggles and malfunctions, this morning’s workout was a breeze…or maybe a bit more like an ARCTIC BLAST that froze our boogies, icicled our lashes and challenged our endurance and commitment to this wild, wonderful thing known as November Project. With a –30 wind chill, us Minnesotans truly embraced the meaning of being #weatherproof (Sorry San Fran…you’re not…just sayin). Winter is ours. We got up and we got after it!

It was possibly Minneapolis’ coldest workout yet, even including last winter’s endless bitter chill. And it was tragically today that our fearless tribe leader, Ben, forgot to charge his weatherproof speaker, leaving us without our usual jams that help us carry on despite the pain. But he didn’t fail us. Quick on his feet and clever with his mind, our morning began with a group beat box mix up. Individually, we made various sounds that surprisingly meshed together, creating a pretty boss beat. We were the music, we were the beat. We carried that beat on a short warm up jog that ended at the base of the hill in Gold Medal Park, recognized officially as the Cinnabon Hill due to the spiraling nature of the sidewalk that swirls to the top.

Don’t ya worry though; there was nothing mushy or sweet about the workout that followed. We had our butts kicked and thighs rocked (and faces froze). Lined up at the base of the hill, we charged, disregarding the spiraling path and sprinting straight to the top. After high fiving a tree, we descended and repeated this sprint twice more. After the third time down, we looped up the hill following the sidewalk. For 30 minutes we repeated this pattern: three sprints straight to the top, one long swirl up. About every 10 minutes, we were summoned to the top of Mount Cinnabon no matter where we were in the workout. There, we did a circuit of pushups, arm dips, and hot-footed lizards – 20 seconds of each. People were huffing, hawing, and hauling ass!

After the work out, a small group of us gathered around our usual table at Open Book, more excited to drink coffee in order to warm up our hands than anything else.  As we sat there, our very own Frenchman, Guillaume (winner of today’s positivity award in partnership with tribe leader Ian; both faced the cold with positive encouraging vibes despite being unable to run and only being able to rock out some Calisthenics) stated with certainty, “That workout built character.” Damn right. Our tribe had conquered “The Big Horn.”

Shout out to Jack, the new lumberjack! His name fits the award as does his determination and force.

I am what you can call a NovPro Nerd…

I’m gaga for November Project. I have my pitch and my spiel down, ready to chirp at anyone, seriously ANYONE (sorry/not sorry if you were or will be one of my many victims) about the benefits of this thing. Here it is:

to show up and get after it and has now spread to over 17 cities in the nation (and Canada, so yeah,  it’s international). It’s based in the idea that you should not have to reach into your pocket in order to be active

; all you need is to get up, get after it and be surrounded by the right people. It’s like endurance sprinting and cross training. Workouts are set up in intervals and circuits with hills and stairs, always looping back so you receive an abundance of high fives and cheers. All shapes, sizes and speeds come to get their butt kicked and no one’s left in the rear. Wednesdays are seriously my favorite day of the week. Before most of the city is thinking about waking up, I’ve already conquered the day. You should come.”

NP is the only thing these days I can talk about endlessly, to anyone, at any given time. Concerning? Nah. Some may furrow their brow to this or question weather I’m involved with a cult, but to them I simply say, #justshowup. You won’t get it until you do.

I have always been an active person. Well that’s false. I was a lil’ turd child. Ask my best friend Stina who has known me since birth, and also runs with Madison’s tribe. While she wanted to play soccer at recess, I was much more interested in playing “dogs.” I preferred crawling around and making animal noises (which is pretty cool #selflove), to physically challenging my body and engaging in athletics. It wasn’t until middle school that I more seriously took up team sports, leading to my passion for all sorts of movement: soccer, volleyball, track, climbing, biking, yoga, running, broomball, frisbee, jumping off of railings…

It’s safe to say, I like to move. But I never appreciated how my body could move and what that really meant, until November Project. I now see my body as a tool. It is a vessel capable of far more than I ever gave credit. I’m not going to the Olympics, or becoming an Ultra Marathoner, and may never be in the lead at an NP workout, but damn my body can carry me where I need to go. I don’t need to depend on anything else, no man-made invention or technology. All I need is my God-given body. To social events, to work, to November Project, to anywhere, my body is all I need. How liberating, how fulfilling! I’ve become more confident and willing to challenge myself with this realization. Limitations seem more like invitations than roadblocks these days. I mean, I’ve gone on 14 mile runs with our rock star leaders Holly and Ben! Just that thought used to freak me out. And of course, there’s more than just the physical aspect when it comes to NP.

This simple thing called accountability has changed how I engage with the world around me. Every Wednesday at 6:30 am there is a group of people who expect me to be there ready to challenge the day and support them through a badass workout. And in turn, I expect the same from each of them. There’s no shame in this expectation, no judgment. It’s simple and pure. It’s about the morning being better and more complete because I was there. Or you were there. Or he, she, it, they…were there. It’s about me finding a deeper drive to be present for more than just myself and my fitness. It’s about Ubuntu.

I only recently discovered this connection (aka while I was on the toilet before I sat down to write this guest blog – the greatest realizations come while sitting on the toilet!). And this is a big one, folks. Ubuntu is a concept I was blessed to explore during a three week global seminar with the U of M called South Africa: Tracing the Footsteps of Social Change. In South Africa with a group of students, I explored the history of Apartheid, the complexity of it’s aftermath, and the truth and reconciliation approach to healing a broken country. Ubuntu was ever present during this journey. Boiled down and simplified, Ubuntu embraces the reality that “I exist, because you exist, because we exist.” Ubuntu is at the core of human existence.  As Desmond Tutu has said:

“A person with Ubuntu is open and available to others, affirming of others, does not feel threatened that others are able and good, based from a proper self-assurance that comes from knowing that he or she belongs in a greater whole and is diminished when others are humiliated or diminished, when others are tortured or oppressed.

We think of ourselves far too frequently as just individuals, separated from one another, whereas you are connected and what you do affects the whole World. When you do well, it spreads out; it is for the whole of humanity.”

Call me a lovey-dovey hippie, but Ubuntu is at the core of November Project. Hardcore at the core. We gather, we recognized, we witness, we support, and we enhance not only ourselves but those around us each Wednesday morning at the butt crack of dawn, in the freezing cold. There’s no judgment on ability, age, race, gender, or any other perceived identity that society has attributed to us or that we have taken ownership of.  This is real for me.

I exist. You exist. We exist. Now, let’s go run some fucking hills!