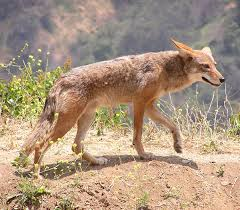 There was a Coyote at November Project this morning.

Ok, I really wanted to have my entire blog post just be the above, but I think that would be the straw that broke the camel’s back and that Laura would finally fire me… SO, the full story is that there was a Coyote at November Project this morning… There I was, rocking a deck by myself at 5:30am atop Coit Tower, waiting for Ali Fauci to stop being a fucking badass, when a coyote just waltzed right through the parking lot. He sniffed around our stuff, shot me a look that said “maybe I will eat you… nah, too skinny” and continued on his way. So then I mention to #LATEGANG “hey, also, BTW, you may want to watch out for a coyote today…. just saying.” And ya’ll were like “hahahoooooookkk Clayton, sure, you show up for the first time in two weeks and start telling tall tales about fucking coyotes, we’ll be sure to keep an eye out.” And so then what happens!? Lillian gets eaten by a coyote. Shame on you guys… ok have a good weekend.