**This may seem like a long story, but I assure you it’s good…

August 22nd … A girl is at her place of work and decides to sneak a peek at her phone as she had noticed an alert from a faraway friend… Little did she know, he was asking a big question. Eugene Kim, co leader of San Diego (our sister city), proposed to me. He beautifully asked if I would join him and hopefully two others on a journey to San Francisco and run the ECSCA Marathon Relay. I was taken back, in shock. Can it be? Is this for real? I squealed and wrote back with photos (of course) “Yes! Yes! a million times, yes!” 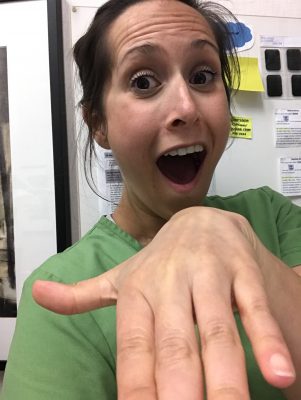 And thus started my love for California… ECSCA this past year landed on the weekend of my day of birth (and BG’s day of birth; November is hella awesome). ECSCA is the final ECS of the year and is a pretty big deal and very well attended by November Project from all over. It’s considered a mini Summit and considering I’ve been to a couple of those, I can verify that it’s absolutely true. It became an intimate gathering of 20+ leaders, some of which I have never spoken to, so it was really great to sit with them and get to know them better; hear about their experiences with NP, with life, create a better bond with these people who share the same passion I have for this movement. 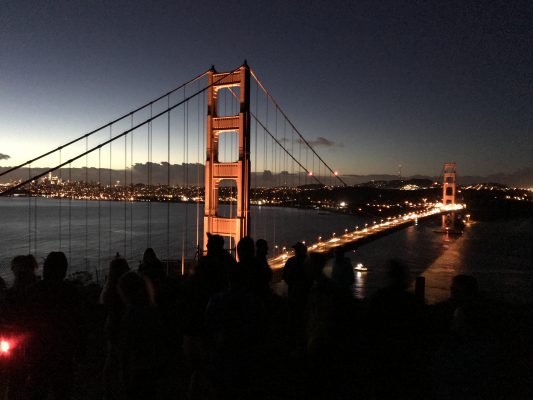 We spent an afternoon playing our version of “The Newlywed Game” – most of us were paired up with our respective leaders or, in my case, fellow Canadian, Derek the co leader of Montreal. We actually did pretty decent during the game and really solidified our friendship over the mutual distaste for Toronto.

Laura opened up the floor and asked people for any stories they wanted to tell about anything, it didn’t have to do with NP; it could have been anything we wanted. I looked at Sierra, co leader of Brooklyn, smirked, and stepped up to the plate. If you’re following Wisconsin Notes on Instagram and listening to the podcasts, my story, along with Woody’s (co leader of Denver) and Paul’s (retired co leader from NYC) are featured – the topic … POOP. Yep, we talked sh*t and it was hilarious.

**Keep reading, it gets better…

Continuing on with the weekend, Saturday was race day. The majority of us were on Marathon Relay teams; Paddy (co leader of SF) was racing for the big bucks and Shelby (co leader of Portland) was racing the 50k for a very special reason. The day was high energy, full of great costumes and the sun was shining and it was WARM! That night all NP collected together for bevies and dancing. (It’s a funny thing, I can dance for hours, but running is still a challenge… Maybe I need to adopt dancing INTO my running…) It was there I saw a unicorn. Well, I saw two unicorns. Miranda was wearing an unicorn onesie – classic. However, the second sighting was glorious. Epic. Jaw dropping. BOJAN WAS DANCING. BOJAN. It was THE BEST THING I HAVE EVER SEEN. For a moment, I swear I went blind. It was magical.

At the end of the night, The Golden Shoes were given out; however, this year the pair was split between a tribe and an individual. Denver took home one shoe and Shelby took home the other. His reasoning for running his 50k was beautiful. It was for his dad who had passed away on that day from a disease that took away the use of his legs.

I also connected with Jesse, co leader from LA. We didn’t talk much at Summit, so it was really great to chat and get to know someone new. We talked about our tribes, being brought on as new leaders and all of the things that go along with that.

SF brought me closer to people I knew and allowed me to get to know others better.  Huge shout out to Matthew Sellen, co leader of Denver and Jackie Knoll, co leader of Phoenix, for being fantastically awesome teammates. 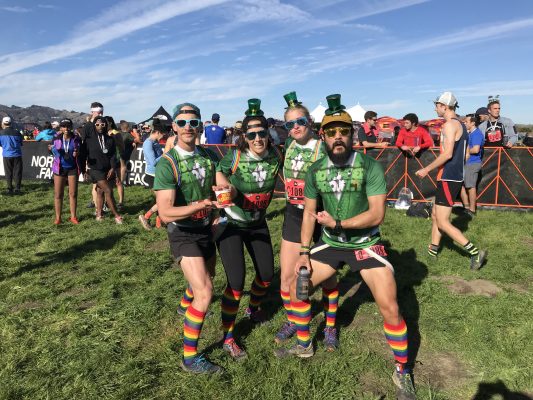 This lead to my recent trip to LA… For a couple months, Jesse and I continued to chat and when he brought on Kait, I was elated for him and really wanted to meet her as well. I decided that I needed sun and fun, so I headed to LA for a weekend getaway in February. Now in true Mel G fashion, I like to surprise people. During the planning of the trip, Jesse informed me he would happily take me to San Diego on the Monday to surprise Eugene and meet Shira. SO STOKED! What he didn’t know was that I was surprising him at the LA workout on Friday morning.

I was fortunate enough to meet Jonathan London when he was in Vancouver a couple years ago and also meet Jesse’s roommates at SeaWheeze which helped as everyone, including Kait, was in cahoots to pull off this surprise.

The morning arrived, and we drove to the location. Jesse, of course, was in plain sight and I had to slide out of the car and crawl on the ground until he moved away from us.

They start the first workout on the 527am dot, so I walked slowly up to the crowd, trying to hide my face so he couldn’t guess who it was. His face was priceless. I think he peed a little. It went off without a hitch and I couldn’t have been happier! 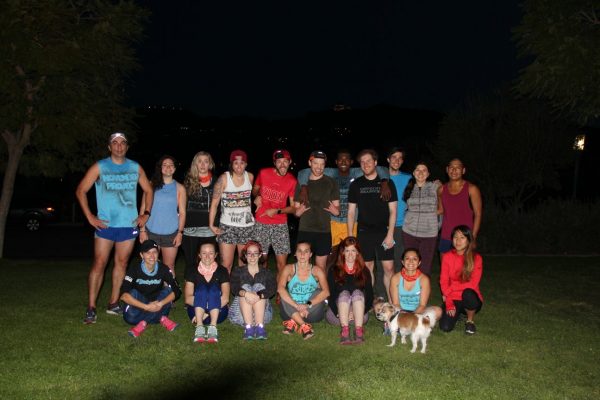 He told me about his love of hockey (not true) and how he answered a trivia question about the Vancouver Canucks correctly (he didn’t)  … Canadian Sharks? Canadian Sharks. No, just no.

I got to see The Bat Cave, Griffith Observatory (it’s a gorgeous place) and where he gets his oil changed. His roommates, Nikki and Elliott, had planned a group dinner and an ice cream social that night. I have never seen someone’s eyebrows sweat before and Jesse had a euphoric experience with his Thai dish… Dinner and a show!

Saturday morning we headed to the original location of LAX’s Wednesday workout, The Hollywood Bowl. Stairs for Breakfast and they were tasty. At real breakfast, I was surprised with a person… Eugene was in LA! So that afternoon, while everyone was busy working or had left town, he and I explored Venice Beach and I met a friend of his with my favourite ironic shirt: “Stay at Home Gypsy”. I laughed a lot at this shirt. A lot. Grammar can really change that whole shirt…

Sunday started off with a free spin class at CycleBar, where a group of us went and raced each other. Or maybe that was just Jesse and I … He got first and I got third. WHO GOT SECOND!? #raceeverything Eugene, Jesse and I all headed to Santa Monica and spent the afternoon there wandering around enjoying the sun. The evening was full of more friends and fun; however, we called it early due to our extremely early wake up call in the morning… ROAD TRIP TO SD!

Four of us went down to SD to, what I thought, was for me to surprise Eugene. I arrived and looked around… People were dressed in red and white and other Canadian items. I saw Verner there which was random and hilarious because he was hella surprised. And Zip (co leader of SF) also happened to be in SD. hahahaha As it turns out, Jesse told Eugene I was coming down their way as soon as I booked my trip. #socal4lyfe It was amazing to be standing there thinking one thing, when in fact, your Sister City had come together and did something awesome for you. I just remember Kait saying “Look at her face!’

We ended our SD escapade with a yoga class taught by retired SD co leader Lauren Padula. Exactly what I needed knowing that I had a car ride to the airport and then a plane ride home. 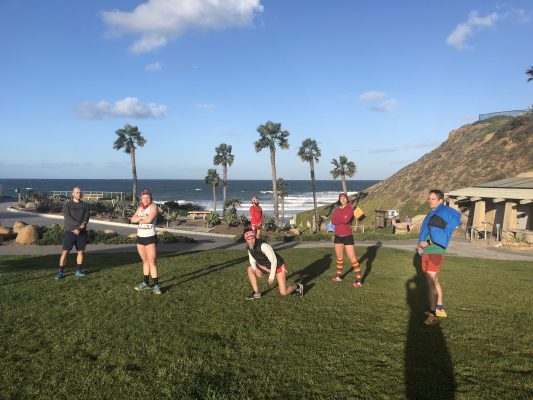 My point is November Project is, and will always be, this amazing network of extraordinary people that will do awesome things for you. Give you a place to stay, pick you from the airport, drive you around, surprise you, go out of their way for you because it’s just what we do.

My first Summit, I stayed in one of the Chicago houses. My Marathon Relay team consisted of myself, G1, Jarrett from Baltimore and Hans of Fort Collins (who will be here in April). Boston was unreal and overwhelming and exhausting and I wouldn’t change that experience for anything. I loved every waking moment of that weekend. And The Summit Hangover is real. SO. REAL.

Summit will be announced soon – I promise. I highly encourage you to take part if you can. If you think Wednesdays are awesome, take that multiply it by 17 million and that’s the level of energy, positivity, excitement, weirdness all rolled into one epic weekend.

Who wouldn’t want to be a part of this?  #FOMO 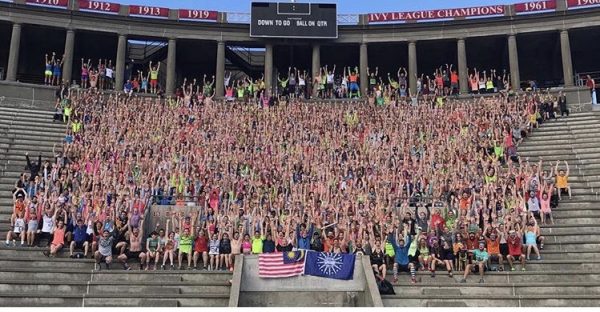 **Totally worth it, am I right?