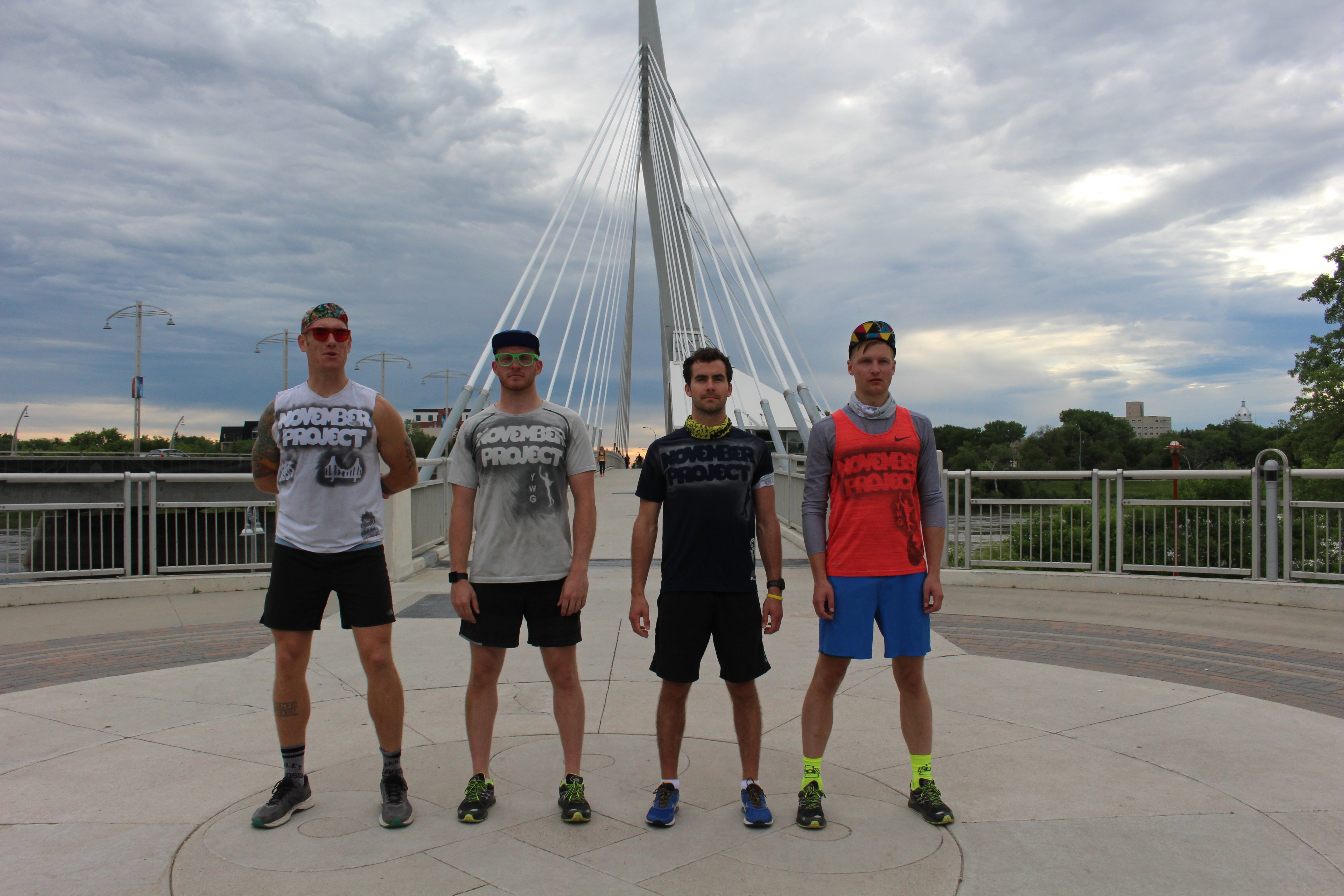 Well we did it, we finally got the other NP founder, Brogan Graham AKA BG, to make his way up to Winnipeg. It only took us hitting ~300 people for our two year birthday to convince him we were worth the trip. His Serbian counterpart, Bojan, was here to initiate Winnipeg as a tribe in the middle of January last year, but Brogan decided to come check out the summer weather we are famous for. Apparently the way Bojan described Winnipeg winter as being similar to Serbia deterred BG from coming in January.

BG led an epic bounce, even Zeus was pumped (#dogsofnp), Tom led a wicked warm up with the CMHR as our back drop, and then we decided to forego the time trial so that we could get a full bridge challenge in. Brogan doesn’t listen to instructions well, or he was just feeling super soft, one of the two, and started with the Badass category. I know more than half of you were doing the GTFO category, so that should make you feel better.

Two people who were crushing through the GTFO were the Bram sisters. I guess playing for team Canada, you need to be fit? At every workout they show up to, they absolutely crush it, with big smiles on their faces. It’s almost annoyingly impressive. They also hype us up on the social media, which is good. We like social media hype, not sure if you’ve noticed that. So this week they were the dual winners of the Positivity Award.

This past weekend was the Manitoba Marathon. We had a good turn out of racers, volunteers and cheer squads. Tim Turner, Megan Hunter, Jessica Fichtner and myself all ran the full. Carl, David, Chantelle, John, Samantha, Jason and I’m drawing a blank on who else, all ran the half. Christina Hunt placed in the top 10 overall in the 10 km race (with a torn ACL). Sara, Cathie, Leilani and I’m sure there are more, all volunteered. Renee organized a cheer station at the last turn, and was out there for seven hours with her boyfriend Chris. Everyone from NP that came into the stadium had a special ‘are you good’ shout out from the announcer, thanks Sara for organizing that. Check out this video to see who you can spot from NP at the marathon.

The race itself was gruelling, humidex was up to 29 by 9am, and 31 by 10am. I was personally aiming for a BQ, which was definitely overly optimistic, but hey, aim high right? I lined up right at the front, next to the eventual winner, hoping his skill would rub off on me, and managed to get a grassroots tag on the front page of the Free Press.

The cheering and support from the NP group and everyone along the course was what kept us all going. NP is what got me motivated to start racing half and full marathons again, and I’m glad I did, even though trying to work out this morning was hell. Which is why you saw me hiding behind the camera for most of it.

This Friday, our man Junel is running a 100km at Garbage hill to raise money and awareness for mental health, and to ‘Trash the Stigma’. We will be meeting for a pop-up there at 6am, right at the bottom at the entrance way to the hill. It will be mostly running, as we will run a few loops with him to show our support. It’s for an important cause. Last year, in the month of June, there were seven suicides during the month of June in our high schools. One of those girls was Jaedra Winter, a close family friend, my little sisters best friend. Her mum showed up to a few NP workouts last year after the matter.  So show up, do your part to raise awareness, and show them what November Project is all about. Here’s the link to donate to the cause and help Junel reach his goal.

Now to lighten the mood a bit. Summit. Let’s talk about it.

It’s coming up fast, July 16th is race day. So far, there are two teams from Winnipeg going. Carl, Janet, David and Renee are one. Last night, we convinced Megan, Lauren, Jamie and Jason to put a team in. And of course your trusted leaders will be there, representing. It will be one of those events you’ll have serious FOMO for. And we will surely talk about it for months after the fact. So get a team of four together, and sign up. The 15% discount code is NPON25. Click here for summit info and here.

Next week is a big one. We have PR day, and we are taking yearbook pictures. And we’ve made it short shorts themed, talking to you Guster. The idea was inspired by Graeme Young’s short shorts when we were all out for a training run a few weeks ago. So, pictures, race day, and short shorts.

That’s enough words for one day. See you all Friday!