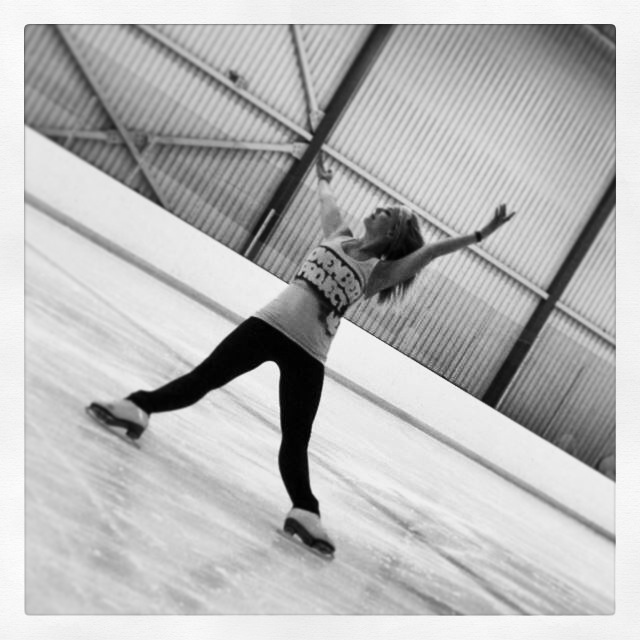 My favourite Swede (she’s not actually Swedish) was at the very first November Project Canada workout. It is only fitting, that one year later, she shares with you her story. I could tell you about how she was very scared of hugs at first and how she says she doesn’t want to do things, but she ends up doing them anyways because she knows it will make her better. Or I could tell you that she still managed to smile every morning after everything she went through this year. Instead, she is going to tell you herself. Ladies, and more importantly, gentlemen, meet Dayle.

My whole life I have been a figure skater in one capacity or another.  No, I was never good enough to go to the Olympics but at one time I could knock off a few different triple jumps.  I spent my whole life in an arena.  Once I had to get a real job I was not longer able to commit the time I needed to do anything more than maintain what I could already do.  The frustration of this lead me into coaching.  I worked as the head coach of the Tofield Skating Club for 3 years.  In my 3rd year of coaching, I realized that I missed being the one skating.  I did some research and emailed a synchronized skating club in Edmonton for information.

Days later I had started skating a couple days a week with the Edmonton Synchronized Skating Club.  After a completing a skating summer camp I joined not 1 but 2 synchronized skating teams.  I don’t like to do things half way and I figured being on 2 teams would allow me to learn the new skills faster.  There was no way that I was going to be the newbie and the only person who didn’t know what the hell was going on.  A team sport was a brand new concept to me but it kind of broke me out of my shell and allowed me to meet girls I now consider to be some of my best friends.  Entering the 12/13 season our team, Edmonton Edge, was ranked the highest in Western Canada, we had come in 4th at Nationals 2 years in a row.  2013 was our year and nationals were being hosted in Alberta.   Fast forward to July 2013.

July 2013; I was facing my first season, in over 20 years, without skating.  After my synchronized skating team failed to meet expectations at Nationals I decided I needed to take some time off.  It had been a long stressful season and we were unable to perform the way we needed to in front of a home crowd.  Another reason for my “retirement” was that skating was something I could no longer afford.  I had spent the previous 6 months without a job after being laid off in mid-January. In dealing with the heartbreak of Nationals I was also left with the realization that I had nothing to do. In that time I let myself get really out of shape.  I didn’t have the motivation to do anything.  I would just mope around all day and feel sorry for myself.  I couldn’t afford to get a gym membership or to sign up for any classes that would hold me accountable.  I was stuck.

I had started following Andrew on twitter when he signed with the Edmonton Oilers.  A few weeks later Andrew sent out his pilot destination deck tweet, I thought really hard about it.  I had heard about November Project through various people on twitter but I had never really looked into it.  Since I am not a very spontaneous person I read everything I could find about November Project.  Then I sent a text with a screenshot of the tweet to my mom and my friend Lindsey, saying “I think I am going to do this”.  They told me it was a great idea and I decide to go for it.  It wasn’t the first time I showed up amongst a big group of strangers not knowing what to expect.  I had done the exact same thing with synchronized skating only a few years earlier except this time I was WAY out of my element.

I got up way too early and consequently arrived way too early.  I was excited but having that extra time spawned a mini panic attack before I had to force myself to go outside.  It was chilly, sprinkling and the mosquitos ate us alive but the people who showed up and toughed it out and had a pretty good time.  I don’t think I said more than 5 words and I definitely opted out of any hugging.  Who really wants to hug sweaty strangers?!?  I didn’t make it to the next work out because I decided that showing up on time to my fairly new job  was more important than doing a workout in Sherwood Park in a crazy thunderstorm.  Even though I knew I couldn’t make it to this workout for a good reason, I felt really guilty.  I knew I was missing out and I was jealous that I couldn’t be a part of the 3 person selfie in the pouring rain.  What the hell November Project?!  What did you do to me?  The first time the group did the stairs at Glenora, I was late and almost missed them.  I did one set and posed for a picture and continued for the next half hour on my own.  Those stairs are very humbling and zero fun to do on your own.  I suggest reading the tweets properly before you #justshowup.  I never realized how hard it would be to do a few sets of stairs.  My legs were so sore the next day I could hardly walk but I loved it.  It meant I had accomplished something and that the next week I could go back and get faster.  I have been going to NP ever since and I am way more likely to be seen hugging sweaty friends.

My friends don’t get it. I have only been able to recruit Kyle (a fair-weather NPer) and with the exception of Lindsey and Jenna, I haven’t been able to recruit the girls from my old skating team.  The girls value sleep more than a fuck-yeahing, high-fiving, sweaty-hugging good time.  Apparently I am the crazy one.  Crazy because 3 days a week I get myself out of bed and decide to do something that has a positive effect on my life.  Crazy because 3 days a week I get to meet new people and make real connections before most people have had their first coffee.  Crazy because I am exploring the hidden gems of a beautiful city while they are tucked in their beds just dreaming of such places.  Yeah, I’m the crazy one.

Over the last year my love for everything NP has grown each day.  Jen is probably one of the nicest people you will ever meet.  She is incredibly inclusive and lives and breathes everything November Project represents even if she was initially voluntold to be a part of it.  Nadim doesn’t put up with my shit.  He really believes in no excuses and is always there to give you the extra push that you can’t give yourself.  Andrew is actually the coolest person I have ever met.  This world would be a better place if more of us could strive to be like that guy.  Judy is a beast. You can’t help but to be inspired by her.  Josh gets faster and faster each week and continually rocks our group photos.  I don’t know about my speed but I have definitely taken some notes on posing for a picture 😉 Tanis is the first person to greet a newbie, make them feel welcome and gives great high fives.  She also loves shirtless men (we are seriously lacking shirtless men).  Lindsey is one of my best friends and it didn’t take much to convince her to come out.  She is a great running buddy and has pushed me a lot.  I owe a lot of my progress to her. Kerry, Chris, Erin, Lorin, Cathleen, Calvin, Jenessa, Bob… I could go on forever with only good things to say about the Edmonton tribe.  These people are amazing!

I am still a work-in-progress and I don’t see a future where I love running even close to as much as I love skating, but I am trying!  I have now completed a couple 5K races, a 10K and I am going to do the SeaWheeze half 3 days after my 27th birthday.  I am not a fast runner but I can feel myself growing as an athlete and I feel like I am becoming a better person just because of my involvement with November Project.  I have made it through what I would consider the toughest year and a half of my life. I have done my best and used NP as a catalyst to turn things around.  I love the idea of training for life.  This last year I have been training to get my life back.  I think it’s time to put the skates back on and I am extending an open offer for skating lessons to all members of the tribe.  #FuckYeah

2 Replies to “Blades of Glory by Dayle (YEG)”