We made it four years, so allow me to be self indulgent for a moment.

At the end of my block there is a bar. It’s a nice little spot, mostly filled with neighborhood folks talking about whatever it is we all talk about. Beer and wine are the only things served at this particular establishment which, from my limited experience, seems to suit everyone who hangs out there just fine. There is also a good amount of free karaoke offered to anyone who walks through the door, whether karaoke is your type of activity or not.

This bar is owned by a very pleasant couple who welcome you with a Koozie as soon as you come in. The first time I was there I got to speaking with one of the owners who gave me a brief rundown on why he decided to buy the place. At $2 a beer I’ll give you a hint…it wasn’t to get rich quickly. ” I don’t know, it just always seemed like fun to own a bar,” he said, ” it gives you an excuse to hang out with your friends. No one really likes to come over to your house, but hey, if you have a bar everyone’s there! It’s just a place to have fun.” 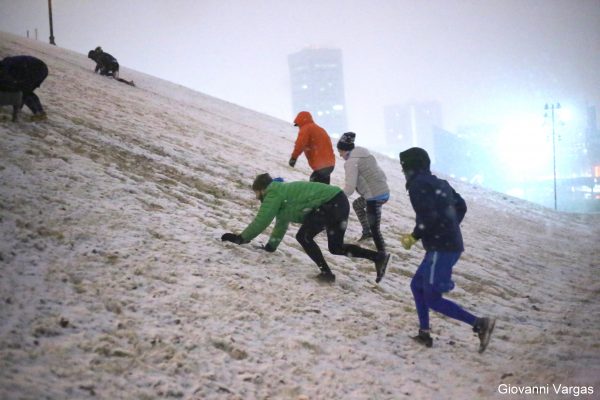 Four years of November Project has left me with a lot of time to think about the what, where, why of this “movement.” When we started there were only 7 others cities in North America; now there are 44 cities across the world. When we started there were only about 5 of us on average on top of Federal Hill. Now it’s pretty hard to know how many people come through our workouts. We’ve thought about NP in just about every capacity we could, from every angle we could, through every lens we could. Yet, no matter how much I think about it I usually come up with the same thing, something very similar to what the owner of that bar told me.

This morning was a good reminder that ultimately, November Project is just about being around people you like. I got in my car after today’s workout, found a pen, and cheesily wrote on the back of an envelope “NP is simply about creating joyous moments.” November Project is about not starting your watch, yelling “wazzup” up at strangers, about having fun simply because we can. I left this morning on a high and felt that I needed to write it down, right away, before adult responsibilities ruined it for me.

Kay, Bryson, Sydney, Pat and I ( all the current and former co-leaders) have spent hours  coming up with new workouts, discussing how different workouts can be more inclusive, debating how we can reach more people, arguing how long a particular part of a workout would take, sketching routes through the city for annual events. Sometimes we over plan, sometimes we under plan but there is always some sort of plan. What I know now (and this morning proved it)  is that the best moments are the unplanned ones. They’re the moments when a small group of committed individuals show up despite the snow, never bother to turn their watches on or track their workout, roll down a hill because it’s fun and basically throw out every perception of what being an adult should look like.

What i’m most happy about is that four years later I can still say, in the same tone the owner of the bar said it to me, ” I don’t know, it just always seemed fun to have a ‘workout/morning recess exercise group thingy.’ ” For me the overarching lesson of every snowy, rainy, joyous morning is simply to spend more time with your friends.

Don’t worry about whether or not you planned it.

Don’t worry about whether you recorded it or not.

Don’t worry about where it is or whether you brought the right jacket for it.

I can tell you, that after four years, I’m still 100% sure that more time with the right people is always, always a good thing.

To everyone that has ever bounced with us early in the morning, no matter the weather, thank you for allowing November Project to be a place to have fun. With all of its flaws acknowledged…It’s still one hell of “an excuse to hang out with your friends.”

Take Big Bites Out of Life,